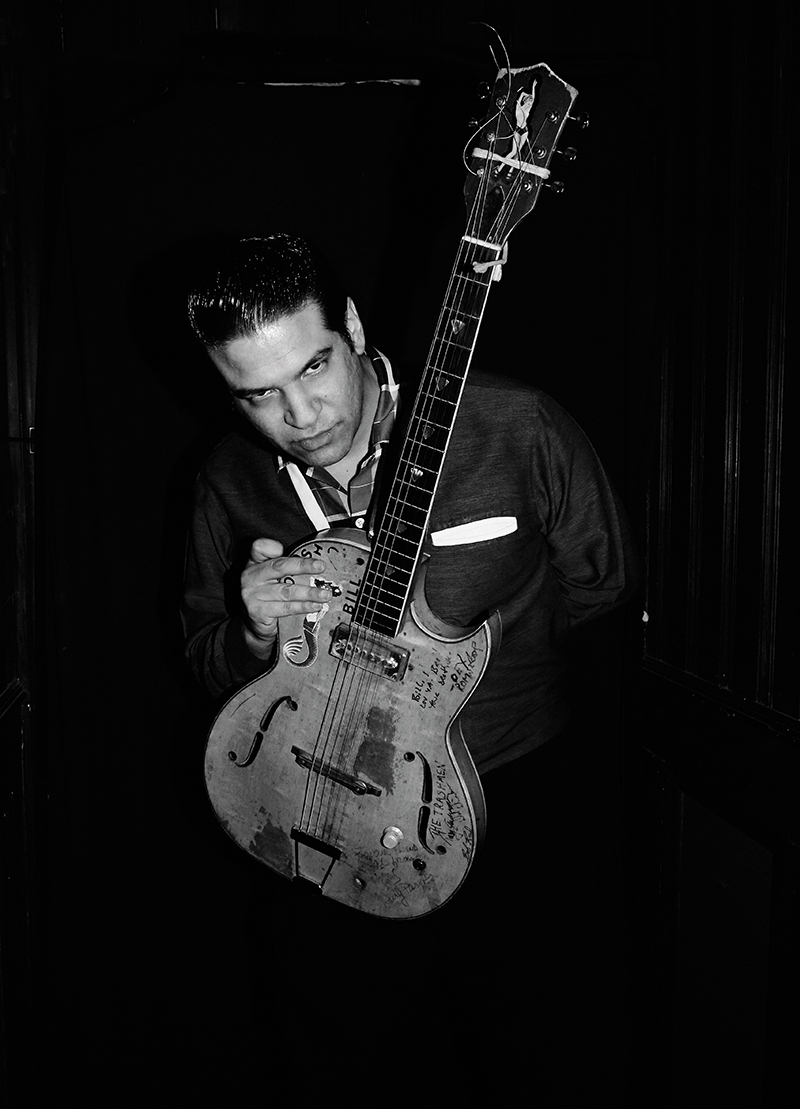 When it comes to modern rockabilly artists, many of them are far too precious with how they think about their music and are much more focused on looking and sounding ’50s-era authentic. The too-often forgotten element is that the early rock n’ roll guys were rebels, and that their music was full of rage and sex. Yet, with the exception of The Cramps, there are barely any artists out there pushing the envelope with vintage-sounding music. Enter the greasy, savage, traveling one-man band known as Bloodshot Bill.

Hailing from the great Montreal, Bill has been raging on the rockabilly scene since ’98 and has survived with an uncanny ability to adapt. Whether he’s filling in backup for another artist or is completely on his own, Bill can literally become a one-man band, playing guitar, bass drum and hi-hat simultaneously while singing, shouting, moaning and groaning.

“I started playing as a [one-man act] just for fun,” Bill says. “Where I was living at the time, I had access to all these instruments and set them up just to try it out. I really liked it, so I played a local bar by myself. It worked great, and I still have a lot of fun doing it, but since I can’t always get a band together or the guys can’t just drop everything and head out on tour, it’s been great to be able to just throw everything in the car and go. Just recently, I was doing a show with a full band, and the guys were late, and it was almost time to go on. I was fine to go on by myself if I had to—no sweat.”

Bill’s self-reliance affords him many different opportunities that full bands aren’t able to take advantage of as easily. “Because it’s just me, I can hook up with other musicians in the towns I visit,” Bill says. “If I’m totally on my own, that’s cool, too. I can do large festivals and small bars. I have enough friends, and I’m well-known enough in most places that wherever I am, that little scene comes out for me. I like that it’s all on me, so at the end of the day, I either get all the credit or the blame. I just think of myself as the human jukebox, just a noise maker, and hopefully, you like the noise I make.”

Since not everyone is familiar with the kind of music Bill plays, selling himself as a rockabilly artist presents its own challenges. “Most people know what rockabilly is,” says Bill, “but I have to say ‘rockabilly.’ If I say I play ‘rock n’ roll,’ they have a completely different idea, just like if you say ‘R&B,’ most people think something like Beyoncé, not Ruth Brown.”

Being a world-renowned rockabilly artist from Montreal isn’t as strange as you might think. While Bill travels the world, he finds something comforting about his hometown. “There has always been a great scene in Montreal,” says Bill. “It seems about every 10 years, it rejuvenates, and new people and bands come along. I’ve been everywhere, and in some of these small towns, things can get pretty sparse, so it’s great to be able to come back home and play with friends and see things thriving.”

It’s interesting when an artist chooses the path less taken the way Bill has. Everything gets counted against a different measuring stick. He seems completely satisfied with his life on the road, and things like money and notoriety don’t even register among what he counts as his successes.

“A lot of the records and artists I’m influenced by are not well known, so I kind of knew when I started [that] I’d have to go out and find my audience, and I feel like I have,” says Bill. “For me to support myself and to be able to keep doing this is a success for me. I’m on this label, Norton Records, and before they signed me, I loved so many records that they did and the artists they worked with, so for them to put out my stuff is amazing. I’ve shared the stage with a ton of my musical heroes like The Trashmen and The Sonics, even original ’50s rockabilly guys like Sonny Burgess and Billy Lee Riley. To have guys like that tell me they like what I’m doing means the world to me.”

Bloodshot Bill might be the ultimate example of a DIY independent artist. He works with who he wants, tours where he wants and records what he wants. He’s found the perfect way for himself to survive and thrive on his terms. You’ll have two opportunities to see Bloodshot Bill on Oct. 28 at the Funk ‘n Dive Bar in Ogden and on the 29th in Salt Lake at the Garage on Beck.