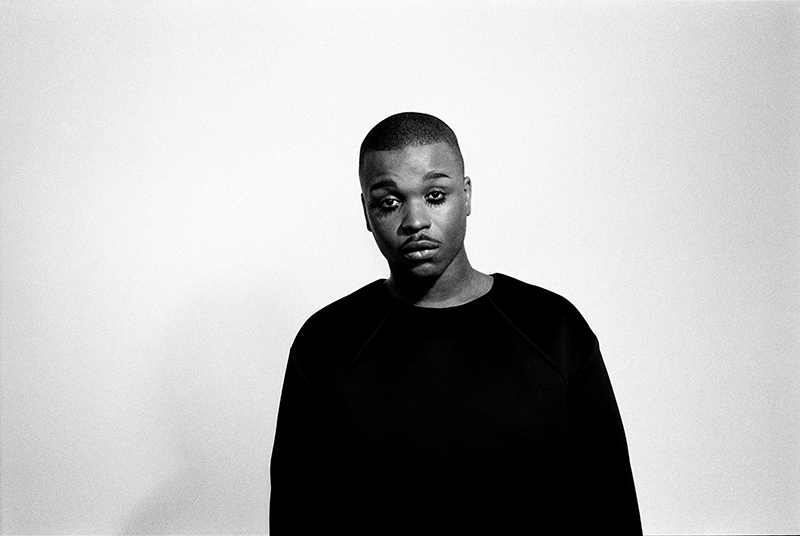 Cakes da Killa hails from New Jersey, and his East Coast rhymes have been making waves in the LGBTQ hip-hop scene since 2011. Since making his debut, Rashard Bradshaw has proven to be much more than just a rapper, but a true queer performer advocating for equality and body positivity with his provocative lyrics, sexual candor and impeccable style. In the past year, he has appeared as a guest speaker on the influential Diversity in Electronic Music TED Talks program, completed his first studio album Hedonism, and released a music video for “New Phone (Who Dis)” online with Adult Swim. Cakes’ music is a fluid combination of technical lyricism and electronic production. It is a reflection of the work of his musical idols such as Lil’ Kim, Missy Elliott and Busta Rhymes, mixed flawlessly into house-based dance music. He’s a fierce human to say the least, and one to keep on your radar.

SLUG: Where did you get your start making music?
Cakes da Killa: I sort of fell into it, thanks to making funny videos in college of me rapping to instrumentals. From those videos, I was offered a slot on a compilation mixtape, and I’ve been recording music ever since.

SLUG: You have a widespread group of followers within the LGBTQ community and out. What do you feel are some of the benefits to appealing to such a diverse audience?
Cakes da Killa: Having diverse appeal is great because it helps with traveling. I don’t really think about it too much, though—I just focus on being myself.

SLUG: With the recent Oakland Ghost Ship fire, safe spaces for artists and audiences to engage with each other are becoming increasingly more difficult to come by. What needs to be done to preserve the underground culture that originated house and techno music?
Cakes da Killa: I think, ideally, spaces should be owned and operated by actual figures in the underground. I think these spaces should also be respected more by people who enjoy them as well as outsiders who don’t. I also believe artists should be able to tell their stories with their own words to make sure the history is told correctly. Clubs close and new venues will be made, but history can be warped, and that’s very detrimental.

SLUG: Where are spaces you feel most welcomed in? How do you try to deal with homophobia among the hip-hop community? How do you deal with racism within the gay community?
Cakes da Killa: I feel the most welcomed wherever I go because I am comfortable in my own skin. I flourish the most in nightclubs, though. I don’t deal with homophobia in the hip-hop community—I tend to just do me. Racism in the gay community is something I deal with more often. I address any issues head on—the same thing [goes] with fat phobia. I will take up all the space I want, and you will deal.

SLUG: What part of your music is blatant activism, or working toward addressing homophobia from hip-hop? How much do you try to incorporate that activist perspective? Is there ever a fear of pigeonholing?
Cakes da Killa: I’m just being myself, and sometimes, that can be political.

SLUG: With such a noticeable attention to visual detail with regard to your album covers and music videos, what inspires your artwork?
Cakes da Killa: My life, red wine and boys.

SLUG: Your lyrics are pretty dirty. Could you speak to the incorporation of upfront, visceral sexuality of your songs/lyrics and your proud delivery?
Cakes da Killa: I don’t think my lyrics are dirty. I talk about sex because it’s a healthy part of life. I talk about gay love in my music because we need more of that in music and literature for visibility.

SLUG: What are your thoughts on becoming an icon in the LGBTQ community and touring with another icon, Mykki Blanco?
Cakes da Killa: I wouldn’t call myself an icon, but I do realize artists like Mykki and myself have opened up doors for others to be able to thrive as openly gay rappers/creatives. I love touring and can’t wait to get out on the road and start collecting moments for my new album.

SLUG: What advice do you have for people watching you who are still searching for their boldness?
Cakes da Killa: Realize life is not a dress rehearsal and you only get one chance to do it, so do it without any limitations.

Be sure to grab yourself tickets to see Cakes flex his lyrical muscles live at The Stunt Queen Tour with fellow rapper and performance artist Mykki Blanco, Feb. 24 at Urban Lounge.