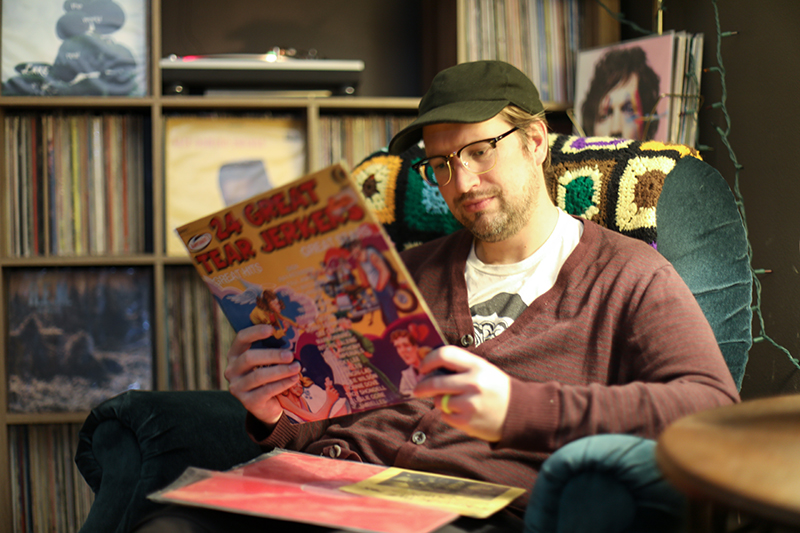 Based out of Utah, Davin Abegg runs Swoody Records, a lo-fi, experimental label that showcases artists from across the nation.
Photo: John Barkiple

Combing Through Layers of the Bizarre: Swoody Records’ Davin Abegg

Swoody Records is a Utah-based label that’s been putting out loads of obscure and strange music since its inception in 2013. Many of its artists are bedroom-based—they rarely (if ever) tour or play live, and the music comes from just about every corner of the country, making it difficult for local buzz to promote the artists. Despite all this, about four years and 30 releases deep, Swoody continues to be a unique and prolific label. Founder and label head Davin Abegg seems to intentionally keep the label’s purposes enigmatic, enjoying the feeling of haziness and discovery that marks a lot of Swoody’s music.

While Swoody is definitely a full-fledged label today, it began almost by accident. What is now marked as the first Swoody release was put out without any conception of a label. A compilation of songs created off of independently written poems, Abegg searched the internet for musicians from all over the country to contribute to this release. “I put it on Bandcamp and that was that,” he says. “It was a great album and I thought, ‘Well, now what do I do?’ I wanted this to keep going.” So, Abegg took this national-reaching approach to album curation a step further and started regularly releasing music. “A lot of these people were artists I’d met through Soundcloud or whatever, and they had a bunch of songs, but had never actually released a full album,” says Abegg. “I would put together an album and make this artist look a lot more accessible.” A desire to expose what he sees as the unsung heroes of the music world drives his practice, coming through in some of his more eccentric releases. For example, a local artist like Fisch Loops, whose wonky psychedelia isn’t typical for the mainstream, fits in perfectly in Swoody’s catalog.

This internet hodgepodge approach to finding artists is Swoody’s most characteristic feature, but also one that creates some obstacles for Abegg. When listing off the places from which he signs artists, he referenced Arizona, California and New York as some of the primary areas he pulls from. Thus, even though the label is based in Utah, it’s not compositionally local. “I wish I was more local—it just hasn’t turned out this way,” says Abegg. While Abegg does have to be judicious about how many projects he can tackle at one time, he still manages to release an impressive amount of music from artists near and far. From the stoned R&B of local Valerie Rose Sterrett to the psychedelic folk of Philadelphia’s Russel the Leaf, diversity is the main focus of Abegg’s label.

As grounded in a technological world as Swoody Records is, there’s a deep element of nostalgia imbued in Swoody releases. Listening to Abegg’s band Secret Abilities represents the label’s sound well: gritty, somewhat comical and heartfelt pop music highly influenced by the early indie and alternative scenes. Abegg expresses a love for this music: “I really like homemade, unique, interesting sounds,” he says. “I don’t like it to be very polished. I like it to be interesting. Like, some person recorded this and wasn’t really planning on anyone else listening to it.” On top of the music, Abegg’s conceptual ideas add to the anachronistic feel of Swoody. Outside of the song poems project (an idea Abegg says originates from a ploy pulled by studios in the ’70s to make quick money), an upcoming release of Scopitone covers showcases these interests. Scopitones were jukeboxes with projectors built into them that would play clips alongside songs—essentially, the 1960s’ conception of music videos. “They had a bunch of funky music videos,” says Abegg, who becomes particularly zealous at the idea of reviving history.  “There’s some really weird and bizarre stuff.” By looking to this now-forgotten music technology, Abegg digs up songs and ideas the same way he digs up artists, hoping to find the weirdest and wackiest stuff he can.

As the current art director for RevelTV in Kaysville, Abegg’s background in design leads him to make a portion of the artwork for Swoody releases. While Abegg does say that “I don’t want to do all the artwork because I don’t want everything to look the same,” his art suits the music best. He often creates collages of distorted photographs, giving each cover a surreal and eerie feeling. Along with the outsider music, this artwork helps give Swoody releases their own flavor, separating them from much other music.

While Swoody might seem like a big project with a lot of ambitions, Abegg’s attitude toward the label matches that of his music. “A lot of people think it would be so awesome to start their own record label or be in a band or whatever, but you just take these little steps at a time,” he says. “You don’t see the end goal until you’re there. I like doing it that way, just seeing what happens.” There’s no show on Abegg’s part to appear as if he has all the answers or a master plan for the label. Instead, he’s content with giving the world a look at the distorted underbelly of contemporary music. Find Swoody’s releases at swoodyrecords.bandcamp.com.