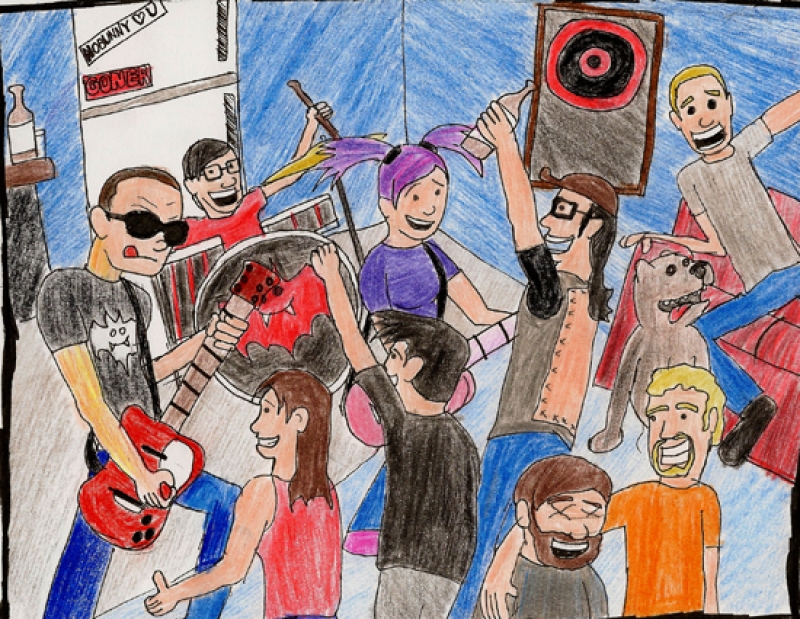 Compound: If you Hit the Wall, You Have to Take Your Clothes Off 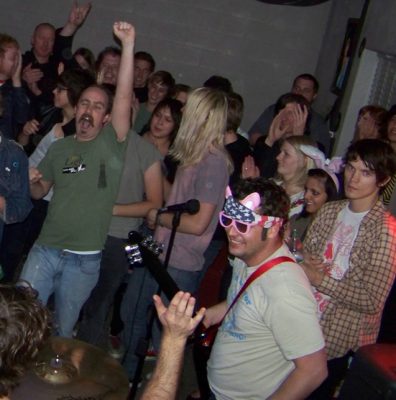 House shows are the best way to see live music. Sweaty musicians, and a sweaty crowd come together on a person-to-person basis instead of king-to-peasant basis. In Provo, UT behind the tucked away door of #166 lies the Compound––part time illegitimate venue and current residence of Joey Mayes. The large living room walls are lined with comfy couches worn to perfection, a record player blasts grungy rock n’ roll and a large slobbering dog named Ned greets everyone who enters. The most memorable piece of art is a dartboard hanging on the wall with “If you hit the wall you have to take your clothes off,” written above it. The bands set up in the tiled area, which serves more as a stage than a functional kitchen. By the end of the night if your leg isn’t covered in dog spit, and your face in sweat you must be doing it wrong.

31-year-old Mayes grew up in Memphis, Tenn., and moved to Provo for school in 2001. Mayes stumbled upon what would eventually become Compound in 2006. “I walked in the door to the big open space, and I took it,” says Mayes.

The shows are normally scheduled to start at eight, and end around 11 p.m. With apartment buildings and other residents close enough to share tin can telephone secrets, Mayes says, “The police have shown up twice in the nearly three years we’ve done it. We try to keep it pretty happy for most of the neighbors. We’ve been pretty lucky.”

The majority of the touring bands Mayes hosts at Compound are on Goner Records. “Anytime I see a band coming west I see if they want to play a house show.” Some bands that have visited in the past three years are Nobunny, Box Elders, Brimstone Howl, Vivian Girls, The Dutchess and the Duke, Fallout and Vancouger. Mayes, who plays in The Broken Spells and Burnt Reynolds & His Hot Bones, generally opens the shows. “I get to play with a lot of my favorite bands. It’s pretty self-motivated sometimes, but at the same time a lot of kids don’t get exposed to that side of underground rock. It’s pretty under the radar with media coverage,” Mayes says. The best way to find out about upcoming shows is to watch Compound’s Facebook page.

“The shows are sporadic. Sometimes I know a month in advance, [sometimes] only a week if the band wants to play.” Shows featuring touring bands are normally three dollars and local shows are free. “I wish I could get all my favorite bands to come play, but it’s not always feasible for bands to play at a house where they’re going to make maybe twenty bucks,” Mayes says.

Although Mayes enjoys hosting house shows, he doesn’t intend to open a venue in Provo or Salt Lake. “It seems that the music I like to book and see, no one’s really into, so it would be kind of futile,” he says. “The garage punk bands can come here, play and have a good time. Usually the bands stay the night and they sleep on mattresses we have or the couches. Sometimes they stay a day or two depending on their schedules.”

Although the crowd is small and mostly composed of friends, newcomers are always welcome. “I’ve heard a lot of people say they didn’t come because they weren’t invited,” says Mayes. “Why the fuck do you ever have to be invited to go to a show? If you want to see a band go to the show.”

So get off your ass, keep yourself updated and remember: You’re always invited, so no excuses are necessary.