SLUG Mag Soundwaves
Episode #392 – Homephone
00:00 / 17:29
Spotify Stitcher
RSS Feed
Share
Link
Embed
“Every new record should be the best possible version of your band.” Jacob Bannon—artist, label owner and Converge vocalist—has taken time out of his day to talk to me about his band’s new album, All We Love We Leave Behind. “I’ve always held the idea that if you’re making art, then the next thing you do should be a new step forward for you. I want to push things further and become a more cohesive artist and more successful in some way.” 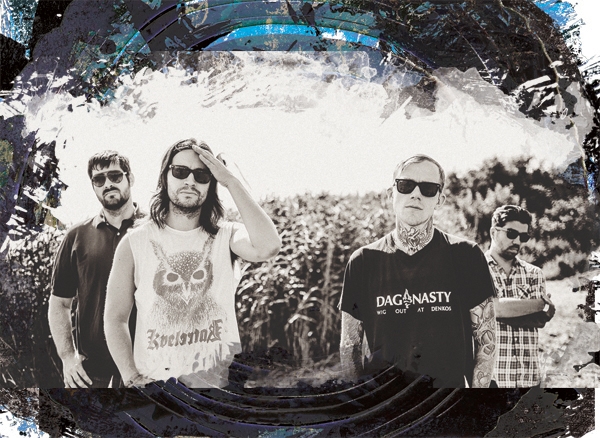 “Every new record should be the best possible version of your band,” Jacob Bannon tells me from a secluded room somewhere in the Deathwish Inc. headquarters in Boston, Mass. The modern renaissance man—artist, label owner and vocalist of chaotic hardcore heroes Converge, among other things—has taken time out of his day to talk to me about his band’s new album, All We Love We Leave Behind, which will be released by Epitaph on Oct. 9. “I’ve always held the idea that if you’re making art, then the next thing you do should be a new step forward for you. The work that I made 10 years ago will have things in common with the things I make now, but I want to push things further and become a more cohesive artist and more successful in some way,” Bannon says. Listening to the new Converge album, it becomes clear that Bannon’s words are more than just the lip service that so many bands give as they release a new album—they’re completely fucking true.

The cornerstone of Converge’s music has always been raw emotion.  Bannon’s mechanical, werewolf-like vocal snarl has always been the perfect complement to Kurt Ballou’s swirling chainsaw of a guitar and Ben Koller’s furious drumming. This is why “Aimless Arrow,” the first song on the new album, is so striking. It still sounds like Converge—their trademark loudness and the feeling of ever-so-slightly controlled chaos are still prevalent—but it also sounds remarkably tight and clean. “We really pushed ourselves to capture the best possible performances—the most precise, the most emotional, the most soulful—and I think you hear that,” Bannon says.  Even more surprisingly, Bannon’s vocals are immediately decipherable—a rarity in Converge’s music, and a calculated move on the band’s part. “With this record, I recorded with a different handheld microphone, which gave Kurt some flexibility and some tones and stuff while mixing, whereas before, things were just this big, monstrous sound that you couldn’t get much clarity out of. I always liked it that way, but he pushed me to do something else, and I reluctantly agreed and went for it,” he says.

From “Aimless Arrow,” the band moves into brutal D-beat territory with “Trespasses” and “Tender Abuse,” where Bannon again showcases a more varied vocal delivery. “Sadness Comes Home” features a surprisingly proggy main riff from Ballou and prominent backing vocals from bassist Nate Newton. Slow weirdness pervades “A Glacial Pace” and “Coral Blue,” while the title track encapsulates every single thing the album does right into four glorious, haunting minutes. Each Converge album is an experience, and All We Love We Leave Behind captures Converge as a tightly focused machine, firing on all cylinders, independent of outside influences and highly emotional.

Part of the experience of each new Converge album is Bannon’s iconic art. All We Love We Leave Behind is no exception. The cover art is yet another surprise, as it is far more restrained than may be expected, consisting simply of a black and white representation of the moon’s cycles incorporated with the band’s logo. The wholly engrossing feeling of a physical album is something that Bannon feels is becoming lost with the current generation of music listeners, but something that Converge strives hard to maintain. “When we create records that have a lot of content and our music has a lot of lyrical content, we want it to be experienced the way that we used to listen to records when we were kids. We want people to sit there with the lyric book or the album cover and feel it and experience it and take in all the subtle little things about an album and listen to it that way,” he says.

For the first time ever, Converge also produced a deluxe version of the album featuring a 50-page book of new art from Bannon. “Working with Epitaph, one thing that [label owner] Brett Gurewitz has always communicated to us is that he always appreciated our band on a variety of levels—he wanted to always be able to show our band in a more formal, artistic light. The suggestion for a deluxe version had come up for a few records in the past, but the idea just never came to fruition,” Bannon says. After recording All We Love We Leave Behind, though, the label approached Bannon about a deluxe edition at just the right time, as he was already creating a wide variety of art for the album, but had not quite decided on the exact direction for the cover. The result is a large, varied collection of work from Bannon, and yet another stunning piece for Converge fans to add to their collections. Surprisingly, the deluxe version of the album is only available with a CD, but Bannon explains that it was unrealistic to take the same route with a vinyl version and have it cost any less than $80. “I don’t feel ethically comfortable with that. I know there are some people out there who would pay that, but I wouldn’t,” he says. “One of the mottos for our band is that we never want to do anything or make anything that we wouldn’t want to consume on the other end as listeners and fans of other bands.”

Over the years, Bannon has become well known for his visual art. In addition to creating art for Converge and his other musical projects (such as Irons and Supermachiner), he has provided artwork for bands such as Trap Them, Modern Life Is War, Death Before Dishonor, Cursed and more, as well as pieces in various gallery shows and countless screen printed reproductions of his work—many of which demand high prices on eBay. His stark style is unmistakable—when you see a Bannon, you know it’s a Bannon—though, much like his vocals on All We Love We Leave Behind, there is much more subtlety and variation than most people give him credit for. “I always find it interesting and a little funny when people criticize my work as all looking the same, but that’s because everybody is coming to me and asking for the same thing. If someone asks me for something entirely different, I am more than happy to go in that direction,” he says. Bannon thinks of his visual art not as an entirely separate entity of his music, but rather another extension of his artistic personality. “With Converge, I’m part of a collective. We all bring something to the table. But when I create art, it’s just me, hanging out, having a vision and exploring visual ideas.” As I spoke with Bannon, he was creating a piece for All Dead, a Day of the Dead-themed show being held at Salt Lake City’s own FICE. Stop by the gallery on Nov. 2 to see a Bannon original, live and in person.

Talking with Bannon, it became clear that he has a definite passion not only for creating art, but also for sharing it. As a label owner and as part of one of the biggest bands in modern aggressive music, he does his part for exposing audiences to new music by releasing albums from lesser-known bands on Deathwish or taking them on tour with Converge all around the globe. On their fall tour, Converge will bring Norwegian party metal crew Kvelertak on their first US tour, and, in the past, they have helped give exposure to up-and-coming bands such as Genghis Tron, Touché Amoré and Salt Lake City’s own Gaza. “I had been paying attention to Gaza for a while, and they had a lot of qualities that I liked in heavy music—they’re a bit confrontational, they are very DIY-minded and they were just doing something because they loved it,” Bannon says. Gaza joined Converge on their huge US-headlining run of tour dates in support of Axe To Fall, and went to Europe for the first time supporting the band, exposing them to a huge new audience. Ballou, who has become one of the most demanded producers in heavy music, also recorded Gaza’s new album No Absolutes In Human Suffering, lending them immediate credence in the aggressive music world, and helping them garner an ever-coveted positive review from Pitchfork.

Despite his band’s popularity and the legendary stature of their music, Bannon is humble and gracious. He loves the art he is creating and loves sharing it with like-minded people who may connect to it. All We Love We Leave Behind is another touchstone in the band’s long career, and it captures them at a very different place than 2009’s Axe to Fall, or 2006’s No—it is wholly unique, but a Converge record through and through. “I see every record as a legitimate step forward. If we were in the position where that wasn’t occurring for us, we just wouldn’t make records,” Bannon says. “I would rather take on any other job than make dishonest music, because that’s the way that I like music and that’s the way I like to create. These songs are intense and incredibly emotional—without that, you just wouldn’t have a Converge record.”

Converge will be performing at In the Venue on Oct. 22 with support from Torche and Kvelertak. Pick up a copy of All We Love We Leave Behind when it is released on Oct. 9 so you can scream along.