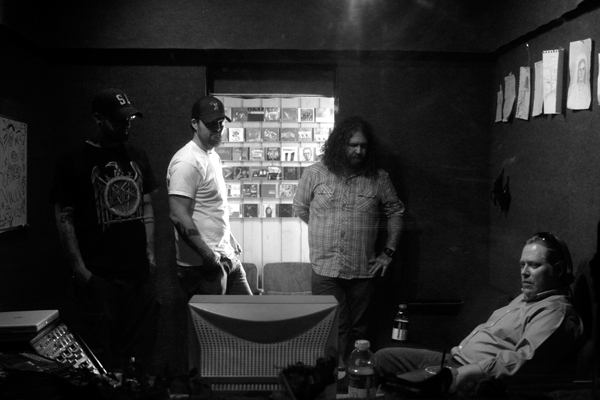 Creation and Crucifixion: INVDRS in the Studio

For the members of INVDRS, as well as many other local musicians, Andy Patterson’s studio is simply a home away from home. Through many years of indirect association, even I don’t need driving directions to the slightly secluded location where many local and national acts have recorded. The studio is modest in size, with rows of compact disc cases lining the entrance to show off much of the illustrious work that has been recorded within these walls. Album covers that jump out to my eyes immediately are Iceburn, GAZA, Anima Nera and the mighty Parallax. Relics from previous or other, current recording sessions are also prevalent through sketched portraits of Patterson hard at work created by various hands, a whiteboard covered in frenzied drawings and scrawled obscenities, and a stack of empty beer boxes tucked away in one corner. The amenities are fairly minimal and obviously efficient, right down to the old school white CRT computer monitor which looms in the center of the control room more like a monolith, than an essential piece of hardware. It feels comfortable, like the bedroom of a friend or brother whom you used to just hang out and play Contra with after school.

When it came down to INVDRS recording their material, Patterson has always been the man for the job. “Working with Andy is kind of like putting on your favorite pair of jeans––it just fits.” says Sean McClaugherty, who has recorded various projects with Patterson, including Iodina and Hammergun, over the past 15 years. Bearing witness to a portion of the recording process for INVDRS on a particularly hot Monday evening, it was quite apparent to me that this harmonious fellowship of creativity is something that comes naturally between these old friends. Recording inside the studio is very much business as usual for everyone, and fosters a mood more as a collective of friends, rather than professional colleagues. “He’s always kind of been like an extended member of the projects I’ve worked with and we’ve established a great friendship over the years.” The friendship between these guys shows too, with frequent cigarette breaks to discuss everything ranging from the current recording decisions to reminiscent stories of thwarting nosey police officers.

“Initially, the plan was to release the album on CD and vinyl,” Gavin Hoffman says referring to plans that ultimately fell through. INVDRS however were quickly picked up by DIY label Corruption Recordings, which is based out of Los Angeles and also fosters label mates Dusted Angel and Dopefight. When this happened, the band was able to continue recording with hardly any snags. “The actual instrument recording was done in less than a week,” which was the result of an initial deadline, Hoffman says. “Due to scheduling, it’s taken a few months to get the vocals completed and begin mixing.” Currently it is estimated that the mastering process will begin sometime in August, perhaps by the time you pick up this issue at anyplace cool.

Since INVDRS formed, it’s been a short but eventful path from just jamming out ideas and blowing fuse boxes at local bars, to these final weeks of recording their first full length, Electric Church which is a follow-up to the concise EP release (reviewed July 08). From the material I heard during my visit, I could only later describe it to a friend as if “someone had just dropped a filthy coffin full of stones onto my chest,” or in short, the EP was merely a trial run. The band has definitely maintained their distinct sound, but there’s been some adjustments made with heavier riffs, drawn out segments and some more experimentation. “I think we made a conscious decision to put faster punk kinds of riffs in and also to slow things down a little in the right spot. Over all, we spent more time getting the mood of the song right,” Dave Moss, who was present in Patterson’s studio with Art of Kanly several years ago, says. The mood he speaks of unearths several styles of heavy underground music rather effectively, with influences from all over. “We wanted to take our favorite elements of punk rock, heavy metal, doom, and sludge and make the most ugly, devastating record we could. Our primary focus was consistency––we want this record to destroy,” McClaughtery says.

INVDRS are four friends and professional musicians who create crusty doom metal which may conjure up visions of biblical malice and elder misanthropy. “I tell stories of holy destruction.” Phil White says. The dirges they seek to profer toward the congregation are to be enjoyed only if your ears are up to the challenge. With a few minor pitfalls, the band remains on track to release Electric Church in late 2009, which will likely be supported with some minor touring in and out of Utah. Their purpose is simple: destroy. No frills or flashy press packages. “There is no concept,” White surmises, “just pure evil.”