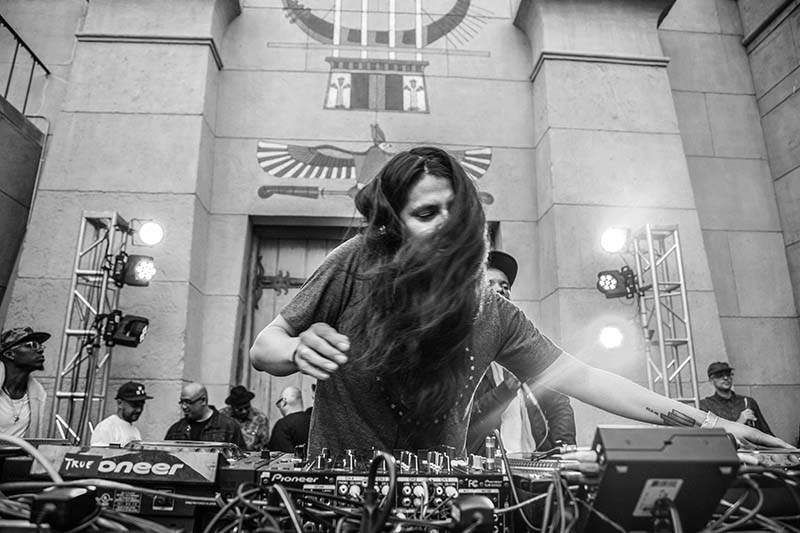 A D.C. Pioneer: Second to Nada

Over 25 years ago, zine writers such as myself set out to define a genre of music amid the wave of artistic creativity that we now know as punk music. Unenviable is the burden of having to explain “exactly what punk is” to everyone you encounter. Enduring the ignorance of laypersons while you attempt to build a movement has to be tough—however, it is something that can make you famous and endear you to an exciting, new form of energy.

Dave Nada, a musician, producer and DJ, is tapping into a new form of energy with Moombahton, a marriage of electronic and Latin sounds he created in 2009. The Real Moombahton Hours Tour hits Utah at the Urban Lounge on May 3. “The theme behind the tour is that I wanted to go out and play Moombahton because it’s music that brings people from different backgrounds together,” Nada says. “I wanted to do that and donate to local charities and nonprofit organizations in each town I play.”

SLUG: So, you agreed to come to Salt Lake City? Tell us a little about yourself.
Dave Nada: I was born and raised in Maryland, about 20 minutes outside of D.C., I guess… 30 minutes outside of Baltimore, kind of in between the two. My parents are originally from Ecuador, so I am first generation, amongst four other brothers, so I grew up in a pretty big family. I lucked out [living between DC and Baltimore]—both cities really have a rich history in music: Baltimore club music and radio and D.C. gogo music.

As a teen going to college at the University of Maryland, I was really into the hardcore punk scene. I played in a bunch of bands, super-immersed in that scene for like a good 10 years, and then as I was going to college, I got into the radio station there [88.1 WMUC], which was another [instance of] good luck or timing …  that my DJ peers were really amazing producers and DJs like Pete Rosenberg, who is at Hot 97 now. I got into DJ culture through the radio station there and from some friends that I met through the radio station. That put me on the path to being a DJ and producing music. I was really into Afrobeat and classic funk and breakbeats. That was my shit starting off as a DJ spinning records. The first party I ever threw was an Afrobeat party in D.C.

SLUG: What instruments did/do you play?
Nada: I used to play guitar… primarily electric guitar. I played bass in a couple bands and sang as well.

SLUG: Tell me about your connection to Salt Lake City?
Nada: My buddy Dusty—he goes by Pickster One—from Phoenix introduced me to Street Jesus. He linked us up via email and then we set up a [show] date.

I’ve been in Salt Lake City in a couple times in the past with my group Nadastrom. It’s a DJ-producer duo, more on the EDM, house and techno sort of music, but we’ve only been through as a part of bigger tours. … We came through with Skrillex twice and we played at The Saltair. Each time was pretty insane. Actually, I’m wrong—I played in Salt Lake City at least a decade ago in one of my bands … but barely recall where it was.

SLUG: What are some of your musical influences?
Nada: Some influences that seem to still resonate with me now, today, that were a big influence on me when I was growing up … I would say Fugazi from D.C. has always been an influence on me as far as how I approach music in general—the whole DIY, doing it yourself, raising awareness for non-profit groups and charities and local places … trying to be more aware and involved politically. So that is definitely something that is relevant to me now, and it was to me as a kid growing up, and that’s what made me want to [join] bands and get involved with music. It’s still pretty big for me as a musician.

The hardcore punk scene right now in D.C., as well as the Latin punk ska scene in L.A., have been really inspiring lately … kinda “full-circle,” in a way.

SLUG: What’s your process like when you create music?
Nada: It’s never the same—it varies. Sometimes if I have a melody in my head, I’ll try to record it in my car or use a midi controller or piano or even my phone … but what I really like to do is create drum patterns. I’ll just bang on a set for a long time. I use Ableton to produce—it’s my go-to … It’s just more user-friendly and easier for me. Usually it starts with percussion and drum arrangement. If I find a good loop or a good couple bars of a drum I just build off of that.

SLUG: Can you explain Moombah to people who are new to it?
Nada: The simplest way to describe it is reggaeton’s weird little cousin. Moombahton is a fusion of house music and reggaeton music. It has an electronic feel. It’s at a mid-tempo pace, like at 108 BPM, so it’s slightly faster than reggaeton speed but slower than house music … it’s halfway between those two sounds and genres (with some Dutch house and electronic music). I slowed down Moombah … so that’s how the name came about.

SLUG: How does it feel to be like the Michael 5000 Watts/Lil Jon of a new genre of music?
Nada: It’s crazy, man. I never suspected that this thing would blow up the way it did. Just seeing how it has changed and permeated into other scenes and sounds—like you can hear it in mainstream music, commercial pop music, techno music and in the underground—I’ve always appreciated the love people have for this music. It always feels good to be a part of something … being able to connect with other people and ultimately having a good time.

SLUG: On a scale of one to 10, how mad do you think Afrojack is that he didn’t think of slowing down his music before you did?
Nada: [laughs] Man, I don’t even know. He probably doesn’t even care because that dude is paid. Moombahton is just like a branch to a bunch of other stuff that he’s had influence on. I got nothing but love for that guy. Who knows if he even cares.

Moombahton may still be in the starting block, so to speak, but the artists who are driving the movement are no rookies. People like Dave Nada and Utah’s very own Street Jesus are pushing and promoting this fresh take on several different genres. Come to Urban Lounge on May 3, ready to enjoy a new experience. If you are not familiar with Nada and Moombahton, go to soundcloud.com/davenada and keep your ears to the internet for the Dave Nada EP, to be released shortly.