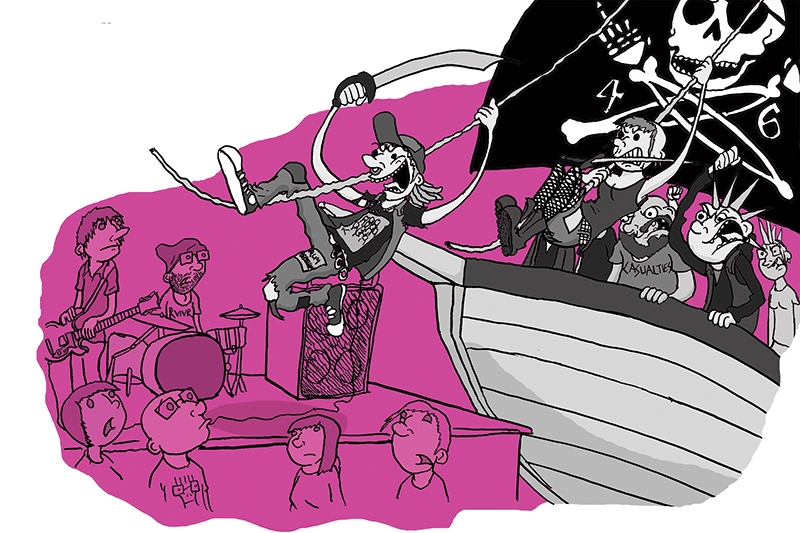 Dig This: The Pyrate Punx

Keeping the spirit of punk alive and well, the Pyrate Punx are a force to be reckoned with. Fed up with a lack of decent, underground gigs coming through Utah, local punk rockers saw the potential to start the Salt Lake Pyrate Punx chapter. The SLC chapter formed, drawing from a wealth of experience and influences from other Pyrate Punx chapters around the globe, and has gained quite a reputation. Currently numbering about 12 members, this interview attracted Steve “Captain Rotgut” (Year of the Wolf), Frank Carroll, Codi Aragon “Sergeant at arms,” Ballz (Ballz Out Records), Marky Terror, Ferro (Drunk as Shit) and Adam Passwaters. “We are all people that are tired of the same status quo bullshit. We are a minority, a vocal minority,” says Carroll.

The Salt Lake Pyrate Punx seek to foster the scene by putting on acts that are otherwise largely ignored. According to the Pyrate Punx, this is due to a number of reasons, which include sketchy promoters who pull pay-to-play deals with bands. “We don’t agree with pay-to-play, which is, ‘We are going to give you 50 tickets, and you need to sell them.’ That’s a sign of a weak promoter because he’s covered his guarantee by forcing presale. You know some bands don’t make the presales, and he kicks them off,” says Carroll.
Other obstacles highlighted by the Pyrate Punx include a lack of all-ages venues which, according to them, are always getting shut down due to fights and drunk kids, but also are prejudiced against the subculture. “There’s a lot of prejudice, especially in Salt Lake, against the brand of music we like. You know, none of us are out shooting dope or heroin. We all have jobs. We are productive members of society. We just want a place to play our music,” says Carroll. Despite such prejudice, the Pyrate Punx are determined to help the scene grow by supporting local and national acts, treating them properly and with the same level of respect. To the Pyrate Punx, this means providing home-cooked meals and a place to crash.
The energy exercised by the Pyrate Punx is an attempt to preserve and revitalize the scene, out of love for the music. This is partially expressd by the preference for booking all-ages venues for their gigs. To the Pyrate Punx, all-ages venues also allow for better exposure to music for the youth. “Bars are fun. Bars are great. You get to have drinks, whatever, but it’s about the youth––that’s what continues on after us,” says Ferro. “That’s where the subculture has mostly grown and evolved––from the youth.”
Rather than booking bands based on projected ticket sales, the Pyrate Punx’s motivation to bring national bands to Salt Lake is based purely on their musical tastes and dedication to the local scene. According to them, as a not-for-profit group, any money that is made goes to the bands.  Notable acts promoted by the Pyrate Punx include The Generators, D.I., Negative Approach and The Casualities. “We all have booked shows at one point in time,” Carroll says. “They know us, and we’ve got a name. A band may contact Ferro, and we say we are going to sit down and talk about it.” After deciding on a course of action, they turn out in force for their gigs, and every volunteer crew member is assigned a task for the day of the event, providing everything from their own PA system to their own security. Everything is done in-house, just the way they like it.
The Pyrate Punx are fairly welcoming of those wishing to join their ranks to participate. Considering themselves anarchists, their organization is fairly informal. All one has to do is show their willingness to put their part into it. Certain members act as role models for the others—these members are distinguished by their silver Pyrate Punx patches. Those wishing to learn are given a green patch to signify that they are still learning the trade. To participate in/as a Pyrate Punk, individuals must operate from three simple, universal rules (as does every chapter): They do not allow any racism, xenophobia or homophobia. Otherwise, they are pretty tolerant of personal freedom, as long as it doesn’t negatively affect a Pyrate Punx production. If it does and cannot be resolved, the offender will be asked to leave.
The Pyrate Punx’s methods seem to work out well, as their reputation appears solid. They booked The Casualties back in May 2013––the only other Pyrate Punx chapter to do so was in Indonesia. They have managed to book them again and will be presenting an impressive lineup of The Causalities, Negative Approach and MDC, with local acts Cool Your Jets and Never Say Never (first reunion show) on Nov. 21 at Club Manhattan.
The Pyrate Punx are truly an impressive group who exercise the punk ethics of DIY and being proactive in a manner that few still do. Their dedication to their community is genuine and is something that many other groups can learn from. Even if one is not crazy about the music that they put on, it just gives that person the nudge to get involved. As Rotgut said, “Get out and do something––make the scene better.”
For more information or to get in contact, check out facebook.com/slcpyratepunx.
Photos: