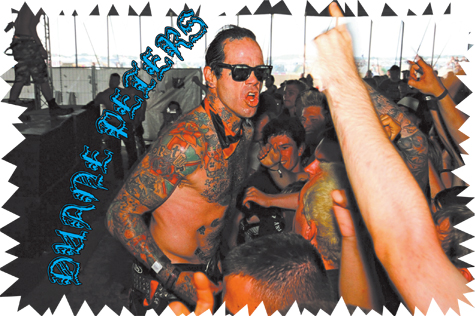 I’ve always been somebody who’s down for the underdog. The kids that got beat up in high school were the ones I gravitated to.  So naturally, I became friends with the skaters in my town.  It was through these guys that I got into punk rock.

Punk rock has always had a special place in my heart.  No matter how “cool” I try to be, I always end up talking to the one kid at the “indie rock” show with a Misfits shirt or a Black Flag tattoo. Being punk is “cool” sometimes and “dead” other times.  In all truth, nobody alive today embodies the spirit of punk rock better than Duane Peters.

Duane Peters, for those unaware, has been around both the skateboarding and punk rock scenes for over 30 years.  Duane was a top pro skater in the  70s and early 80s and still skates today.  He was in numerous punk bands during that time, including The U.S. Bombs, Die Hunns, The Exploding Fuckdolls, and most recently, Duane Peters Gunfight. The man also started two record labels—Disaster Records and more recently Indian Recordings.

I got a chance to talk to Duane recently about the skate and punk scenes and how they are intertwined.

SLUG: Were skateboarding and punk rock always intertwined?
Duane Peters:  [When I started] there was no punk rock.  The skaters actually grabbed onto punk rock quick. When punk rock came around it kind of saved skateboarding. The invert had just come around and that cleaned house on a lot of the fuckin’ bullshit. Like the shit that was lurkin’ around claiming to be a pro skater. It kind of cleaned house on that.  here was no money in the punk thing. There was no slip back then, you’d get a couple hundred bucks and a bottle of booze. Any contest winnings I had went back into band equipment. I didn’t want any money, really, I just wanted to be seen. The older guys back then were 27, they looked 50. Anybody that was 24 looked really fuckin’ old, and they were always lame. It was just a matter of time before we were going to be lame. It wasn’t just Dogtown that was poor.  I skated the fruit bowl with Tony Alva and Jay Adams. I smoked a joint with Jay in the bushes. Tony four years older than both of us, Jay was still having fun. Tony Alva, he was like Elvis back then. But when punk rock came in, it definitely added new attitude. It was the way we came in, we definitely made our mark.

“The skaters actually grabbed onto punk rock quick. When punk rock came around it kind of saved skateboarding.”

SLUG: I know that skateboarding kind of died in the 80s and now you’ve got a lot of guys that the magazines are saying are “back.” Was there ever a time when you quit skateboarding?
DP: I go back pretty far, I was there in ’74, I was there in ’75 and I still fuckin’ shred. There’s not a lot of guys that do, Steve Olson does too, Salba does. Those are the three guys, the three punks from Santa Cruz … that fuckin’ rules and we’re all climbing up to 50. I only quit when I was in jail. I never did more than four months at one time. In my 20s’ I was either in jail or strung out. I was in jail about every three months because that was the only way I knew to clean up. Tony Hawk’s dad threw me in jail at Carson, Calif. in ’86. That got me off methadone. I was breaking the plants with my board and Mr. Hawk, Frank, said, “Get him out of here,” and I was like, “Fuck you old man.”  I got chased into the parking lot and beat up, broke my nose. I’ve broken a cop’s nose with some kid’s board. But at least I got off that shit … everybody’s a lifer on that shit. I had to do a full on apology to Tony, later on.  I was a dick when his dad died and then my kid died, and I was doing an X-Games thing with Tony and I said I do have one comment, “I’ve already made reprimand on your dad. He was so cool.” He was just like, “Dude, I’m so sorry about Chess.” SLUG:  I know you’ve probably been asked this a million times before, but can you tell us about when you did the loop?  It was almost like you weren’t credited with doing it. When Tony Hawk and Bob Burnquist did it, everyone was throwing a fit about it.  But you did it a long time before that, right?
DP: It was like an ice capades kind of thing called Skateboard Mania. They asked me what I wanted, I said I wanted a Hot Wheels track because Evel Knievel was my idol. I told them I wanted it 14 feet tall like the Mt. Baldy fullpipe.  My entry was 17 feet high, I had two ski poles at the top and I still didn’t know that was fast enough. By the time I made it I was starting from halfway up, you don’t need that much speed. I needed the money. My generation when the money ran out, there was no one paying our rent. Vertical skateboarders used to be broke guys. Now it’s a sport. Dads say to their kids, “Do you want to be a doctor, or a lawyer , or a skateboarder, or a punk rocker?” Back then it was “Are you out of your fucking mind?” It was like, “Fuck you, there is no future.”When we heard Johnny Rotten singing “No Future” it was like, “Yes!” It was a rare era. You had to earn your points by showing up and either you were cool and you earned or you were weeded out. You wanted something, you had to fight for it. Now it’s different you can get into graphics, back then there weren’t computers.  It was almost easier to die.

“Tony Hawk’s dad threw me in jail at Carson, Calif. in ’86. That got me off methadone.”

It’s the school of Frank Sinatra, you fall down you get yourself back up, you brush yourself off and then get back in the race.  That’s why I believe we’re classic cars and they’re plastic cars.

SLUG: I was just skating last week and I saw a kid, about 10 years old, wearing a hat with the bill flipped up and it said Suicidal underneath.  He was doing fastplants [a trick Duane is credited with inventing along with Neil Blender].  Did you ever think that your influence would span this many years?
DP: I’m around kids all the time. When I skate, I see guys 10 years younger than me in the shallow end talking. You know who’s skating? The kids. The older guys are talking about their knees hurting. Less talk, more rock.  Don’t talk in the shallow end—just skate. I don’t think anyone could put it any better than that. Duane Peters Gunfight plays with Primadonnas, SKINT and Negative Charge at Burt’s Tiki Lounge on May 23.