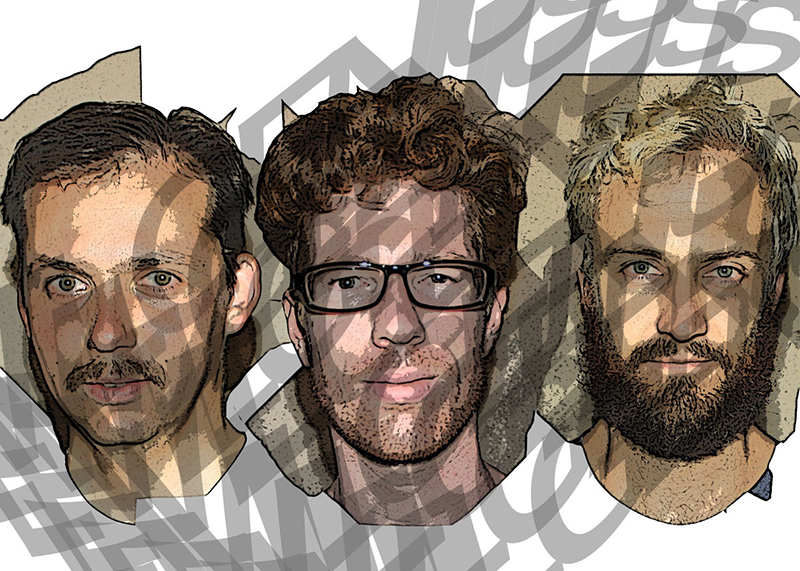 Evil Genius: Somewhere Between Nothing and Everything

Evil Genius are a group that can’t really be pinned down. Their exhilarating and explorative music delves into many different styles and moods at any junction. The trio, consisting of Max Kutner (guitar), Mike Lockwood (drums) and Stefan Kac (tuba), finds a way to balance playful energy with complex improvisation and composition. Evil Genius reflected on their musical philosophies and practices before their Diabolical Records show on Wednesday, Dec. 7.

SLUG: Your music covers a lot of stylistic ground, such as jazz, rock and experimental. Do you see yourself identifying as a member of any one of these communities?

Max Kutner: Any and all of the above, frankly. I compare most people and groups creating interesting music to these fervent patrons at a city-wide swap meet. They browse. They traverse. They borrow. They reimagine links between topics and aesthetics, which initially came into being removed from one another. Then you get deviation, blissful corruption of rigid styles. I think every major artist or creative person does this on at least the micro level. You just can’t pay attention to these borders anymore. If it sounds good, then it is good. It’s also more personal that way.

Mike Lockwood: We all identify as instrumental improvisers with widely varied backgrounds that include many different styles. It is hard to pinpoint any singular community in Los Angeles other than that of a broader “creative music” bubble. Shouts out to rock, jazz, hip-hop, noise, modern classical, experimental and world music.

SLUG: Have you ever received pushback from these music communities for your eclectic style?

Stefan Kac: The short answer is “Yes,” or at least we have all experienced this at some point or other. The contemporary form of this timeless dynamic could aptly be called “Stylism Without Stylists.” Enough of the actual wisdom behind being “beyond style” has filtered into the mainstream (in platitudinous form, of course) that people now are very careful about what they say and who they say it to. Obviously, this is not the same as achieving such wisdom authentically; it’s more that people just want to look with-the-times in the eyes of their peers. I don’t mean to stake out the moral high ground for eclecticism, just to say that whatever your path, it matters how you go about it. I think that many jazz police(wo)men come by it honestly, so to speak. In the end, we need stylists, too, so personally, I don’t necessarily think that stylism going underground—as I would have it here—is necessarily a good thing. It’s actually a very bad thing, if for no other reason than that it sucks the honesty right out of a musical community. This is more palpable to me than pushback these days, but I don’t think I’m overreaching by essentially saying that the one is merely standing in for the other, providing a socially acceptable pressure valve for it, so to speak.

I like to say that aesthetic relativism is both a social grace and a social ill. The real problem with “pushback” is not that it’s negative or that it risks airing unsightly family business to the general public. (I have seen both of those reasons given for why musicians should always be positive; I think they’re both totally bogus.) The problem, rather, is when criticism is issued from a distance, anonymously, out of malice and/or ignorance, etc. And sure, that accounts most of it, but I think my bandmates will agree that frank, detailed, personal conversation among fellow “professional” artists who may actually really dislike each other’s “style” is among the very most fruitful forms of critique available to us.

Some of us are pan-stylists, others are Jazz Police(wo)men. That’s fine. Creative music scenes are ecosystems that thrive on biodiversity and suffocate on conformity; and if anyone thinks there is not conformity in “experimental” or “avant-garde” music, they are not paying attention. I am definitely a pan-stylist, but there’s a little Jazz Policeman in me too. If I can get away with it, I’d certainly rather play jazz with people who live and breathe jazz, and Evil Genius music with these guys, and classical music with classical people, etc. I respect the “authority” of true stylists tremendously; it just doesn’t work for me personally as a raison d’etre. If someone wants to “pushback” against something I’ve done, I’m all ears. It’s a reminder that I’m still alive and that someone bothered to pay attention, two things that are not so easy to establish when it’s all positive all the time. The point is that there are constructive ways to go about this, and then there are mean/entropic/diversionary ways. For me, that’s the real crux of the issue. As it is, I think it would be foolish to think that the pushback is only there if you can put a name or face to it.

Kutner: Most of our friends and colleagues have eagerly embraced the sound of the band. I’m very interested in whatever feedback I can find, and I’m often surprised by the different aspects people find enjoyable more than others. I’m especially interested in critical or even negative feedback, even if I never have any intentions of having it influence my decision-making process. It’s difficult for me to trust blind approval, because it’s easy to like something socially preferred. Maybe even especially so in a busy, network-centric place like Los Angeles. To disapprove of something is encouraging, to me because more often than not, it requires more effort to do so. It is more inspired, I feel. If I inspire someone to react, that’s all I can ask for.

SLUG: How did you decide on the very bright and colorful album art for Bitter Human?

Kutner: My partner, Vanessa Himeles, created that painting when she was in high school. It’s called “Pile of Faces.” It was hanging on our wall, and some innate feeling within me always knew it would be the face of the album. Everything except the yellow background and typeface (courtesy of Orenda co-runner, Eron Rauch) was original from the painting. It’s hard to really delve into precisely why I felt it would work. There’s a manic, schizoid quality to the extreme color and emotions of the faces, and also the kinda subversive gathering and distortion of the faces altogether. I think it reflected the treatment of genres, style and sonic quality in the performances and also the subjects I was concerning myself with during the composing process.

SLUG: One of the songs on your album is titled “Vamp for Lennay Kekua.” How does the story of Lennay Kekua play in to the emotions you’re trying to capture on this track?

Kac: The honest-to-God truth is that (1) much of the tune was initially written without any programmatic associations and without the title; and (2) the only subsequent preconceived connections between title and music were the general ideas of a “vamp” and a “hoax;” hence “vamping” in the sense of killing time or bullshitting—i.e., as a way of keeping the hoax going as long as possible. After I had finished writing the tune and read through it with a band, I realized that there is also a “surprise”/”gotcha” moment where the vamp ends, and that this is very fitting programmatically, i.e., as the moment when the hoax is revealed. (We all remember where we were, right?!) This could, I suppose, be classified as an emotion, but it certainly wasn’t preconceived; and there are no other particular connections of that kind to report. In general, though, causality is extremely elusive when it comes to music and emotion, as no small measure of both philosophical and physiological exploration has attested. I personally tend toward a “formalist” outlook on the creative process, with the emotional chips subsequently falling where they may.

SLUG: A trio of guitar, tuba and drums is a fairly unorthodox combination. What influenced the choice to pursue this instrumental arrangement, and how does this lineup either empower or restrict your composition?

Kac: It is now a cliché among musicians of our generation that you form a band with the right people and not the right instruments. It is very true in this case. I don’t know that there’s any more to it than that. I would be remiss if I didn’t point out that virtually every band I’ve ever been in has been labeled as having a unique instrumentation simply by virtue of my presence. Certainly, many of them have been “eclectic” musically, too; and certainly, I always seek a role for the tuba on its own terms and not as a poor substitute for a trombone or string bass. But I also am no different from my colleagues in digging deep into various repertoires in search of context for my work, and once you do that, you start to realize that there is plenty of context any way you slice it.

I’m going to go out on a limb and conjecture that the Paul Motian/Joe Lovano/Bill Frisell trio is very much “context” for Evil Genius, at least in some small way, even though we’ve never talked about it. If this was not the case, then perhaps we wouldn’t get on quite as swimmingly as we do. And certainly, if you listen to that trio while fixating on the frequent absence of a conventional bass function, you’re going to be frustrated. All I mean by that is that anything can (usually should) be taken on its own terms. That’s how we form our bands, and we hope it’s how listeners will receive them (though, certainly, we realize that this is not equally easy for everyone, nor should it be). Comparison is always fraught because you can only compare with what you already know.

Kutner: It certainly doesn’t restrict my writing for Stefan and Mike. My writing goal with Evil Genius was to reduce the forms to their bare essentials while retaining conceptual richness or personal reference. I always think of the individuals involved first. Who are these people? What do I enjoy most about their style, technique, preferences? How can I craft a structure that will both accommodate my tastes while allowing them to fully express theirs comfortably? I could not design or ask for a better performative context then the one which I share with Mike and Stefan.

SLUG: Is there new music in the works for Evil Genius?

Kutner: Since the release of Bitter Human in late 2015, we have composed well over two dozen new pieces and will be heading into the studio to record our follow-up just before wrapping up our tour. Furthermore, we will be performing most of this material on this particular trip. Come out to the show if you would like to hear.

This Wednesday’s show at Diabolical Records is going to be a testament to the nonconforming and trans-stylistic music that Evil Genius (evilgeniustrio.bandcamp.com) and the two local supporting acts it foot, it ears and Pigmichi create. Any fans of boundary-pushing music should be sure to attend.