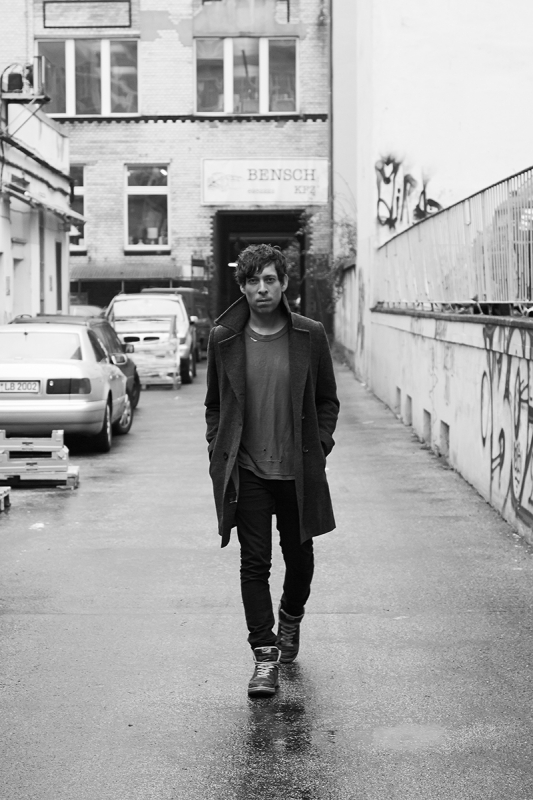 Exploring Craters: The Soft Moon and the Making of Deeper

Perhaps it’s not too dramatic to say that listening to The Soft Moon is like wading into the riptide of a black pool—to immerse yourself in the tremulous and unpredictable forces of the project’s single visionary, Luis Vasquez. His synth-heavy, post-punk sounds have received the acclaim of critics and artists alike since the beginning of his first self-titled release in 2010. However, after his follow-up album Zeros in 2012, Vasquez decided it was finished. He was done.

“I was going through a really dark period at the time, and I was ready to give up on the entire thing,” says Vasquez. “This whole project is very torturous for me. Writing these songs is very painful.”

Sonically, it’s not hard to test the conviction of this statement against the darkwave soundscapes of Vasquez’s music. Almost every track on The Soft Moon shares an abysmal and anxious quality, which reflects the alienated feelings of their creator. Fortunately, though, in July of 2013, Vasquez decided that there was still more inside of him that needed to be released—so he packed up his things in Oakland, California and moved to Venice, Italy, to begin making the haunting sounds that would eventually become Deeper.

In an unknown country and with an unknown future, Vasquez distanced himself from everything familiar in order to reflect and seek self-discovery through his solitude. With the help of his friend and producer Maurizio Baggio, Vasquez began composing again at Hate Studios in Venice. The goal for Vasquez was not to premeditate creating a conceptual piece, but rather to push himself further into confronting demons, reconciling fears and exploring his consciousness through musical expression.

“For this album, I wasn’t trying to be super innovative,” says Vasquez. “I wasn’t trying to create something new. I just wanted to be completely honest and let whatever happens happen … and I think that’s why I called it Deeper, as well: to reveal my deeper side and be who I really am.”

The tracks on Deeper are Vasquez’s most powerful and sincere yet. Each song is titled with a single word, which, when seen altogether, highlights the emotional themes throughout the record. Examples like “Inward,” “Wrong,” “Desertion” and “Without” suggest their loneliness even apart from the lyrics. Musically, the synth-heavy creations of Vasquez bring a violent and manic edge toward that loneliness. Borrowing from the post-industrial and EBM sounds of early-’80s new wave, The Soft Moon provides a heavier interpretation of classic sounds. With heavy drums, wailing keyboards and gasping vocals, Vasquez has the unique ability to both drive a song enough to make it dance-y, but fuck it up enough to keep you motionless (even his new single, “Far,” doesn’t really pass as catchy). The result gives you a kind of oppressive, psychic overload that leaves you with nothing but a wandering mind and a racing heart. For Vasquez, however, the hostility of the music is actually a gesture toward understanding.

“I really want to make the listener feel something. It’s very important for me to kind of ‘get you’ as much as possible in the way that the music gets me,” says Vasquez. “I guess I’m looking for connections with people, and by doing this, I can create something that’s [making it so] I don’t really feel as alone.”This desire for inner solidarity has been a quest of Vasquez’s for a large portion of his life. Thus, the reading of Deeper can be seen as a kind of invitation by Vasquez to feel and relate to his existential isolation through our own life experiences. It’s this invitational element of sharing empathy and contemplation that brings out the cinematic quality of Deeper as we imagine ourselves within his music. Because Vasquez’s tracks are not exactly songs but rather atmospheric soundscapes, the listening experience has an uncanny visual element that makes The Soft Moon so remarkable. As Vasquez says, “I like to make music you can see.”Now living in Berlin, he’s currently working on another project with the legendary John Foxx and is scheduled to begin a tour throughout the U.S. starting on April 9. You can catch his show at Salt Lake’s own Urban Lounge on April 22.

“It’s kind of like I’m obsessed or addicted to feeling bad. In a way, it makes me feel alive,” says Vasquez. “The whole purpose of this project is to find inner peace, but in order to find peace, I have to go into these dark territories from within, and I have to face them and be inside of them … I’m putting it all out there.”