Flying West to the East: Uzi and Ari Tours Japan

In May of 2006, Uzi and Ari embarked on its maiden voyage through the western United States. We slept on a lot of floors, played house shows and rode around in a failing 90s Suburban that didn’t have air conditioning. It was in Fresno, Calif. that we received an invitation from Luxembourg-based record label Own Records to release our album throughout Europe and part of Asia. Thanks in part to their promotion, the song “Mountain//Molehill” was blasting through the Internet and to various ears across the world. A pair of ears that heard the song belong to Tsunehiro Sato, owner of Tokyo-based Friend of Mine Records. He released his own version of the album It is Freezing Out, and was determined to gather the resources to bring us out of obscurity and into the rising sun of Japan.

Fast forward three years to the album Headworms that was also released on Own Records and Friend of Mine Records. Ben Shepard, Garrett Martin, Catherine Worsham and I were on a plane to Japan after returning home from a two month stint in Europe. We arrived in high spirits and met Tsune and the cargo van we were to ride around in. Tsune works as a magazine editor in Tokyo to help fund his infant label, which has released eight or nine releases within the past two years. One of those releases is from another Salt Lake band, The Player Piano. He loves instrumental rock bands with a sentimental twist. He is mostly interested in local bands, and is happy to receive demos from anyone and everyone. 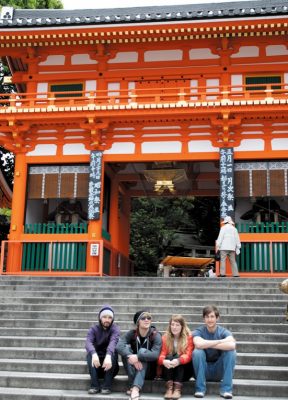 Tsune set up a modest tour that included five shows in Kyoto, Osaka, Nagoya and then two in Tokyo. Booking shows in Japan is a difficult task, as the clubs require a down payment for use of the space. This forces the ticket prices up to between 20 and 30 dollars. This makes the shows smaller than expected, but also brings fans that are interested solely in the music and supporting their preferred bands. My favorite show was the very last one in Tokyo at a club called Moonstep, located north of the fashion district in west Tokyo. We arrived early in the afternoon for soundcheck and soon realized that our allotted time for the night was 30 minutes longer than what we had prepared. Tsune asked if I could perform as Nolens Volens, and I ecstatically replied, “Yes!” It was the last show of the tour, and the stage was set for a dramatic conclusion.

After soundcheck, we wandered through the streets of Tokyo with Tsune, admiring the architecture. The streets were incredibly quiet, even though they were filled with people going to and from work. Tsune took us to a hole-in-the-wall noodle place, and we found nirvana in a bowl of Yakibuta ramen noodles. We headed back to the club to listen to the opening bands.

Another way that promoters offset the cost of renting a club is to fill the bill with as many bands as possible. This particular night there were five bands, and Nolens Volens made it six. We listened to A Picture of Her, a Japanese band that Friend of Mine Records recently signed. Like many of the bands that we played with in Japan, A Picture of Her is influenced by the tremendous wave of emo that came out of America in the late 90s. Like many people my age, I have long since left behind the noodling guitars and emotive voice, but I found myself in awe of their musicianship. They have taken every annoying part of emo out and infused it with elements of math rock.

Several other bands played, and then it was finally my turn to stand before the audience to twiddle my knobs and send my toy instruments through looping feedback. It was daunting to follow bands that are so accomplished as musicians, but I received many happy hands at the end. Uzi and Ari played a very emotional set, as we knew that it would be our last time performing in front of such a welcoming audience.

The night ended much the same as other nights, with the bands meeting together and formally cheering one another for putting on such a great show. We drank Sapporo and ate plate after plate of Japanese junk food, such as dried fish, Pocky pretzels and some kind of seaweed concoction mixed with sesame seeds. Emotions rose and fell as we knew we would be heading back to the U.S. a few days later.

The experience of touring in Japan is a tough one to put into words. There is a lot of positive energy that flows through the hearts and minds of the Japanese people. We feel very lucky to have had the experience. Luckily, we have music from every band we played with while we were over there. Here are a few highlights:

Ets Im
Kashiwazaki
Self Released
Ets Im = Dim Dim + E*Vax + The Books
Ets Im is the project of Provo-based multimedia artist Ryan Bingham. He lived in Japan as a missionary and became heavily influenced by Japanese culture. His music is created mostly through the use of the Monome, an open-source electronic instrument that was designed as a physical version of graphical environment language Max/MSP. On the outset, it seems completely nerdy and detached, but his music is completely relatable and compelling. Ets Im is the most progressive music to come out of Provo in a long time.

Euphoria
Silence in Everywhere
123Records
Street: 07.23.08
Euphoria = Explosions in the Sky + Tristeza
The efficiency with which Euphoria gleans the gems of emo and post-rock forefathers is impressive. Delicate and sickly sincere, there is absolutely no guile in their songwriting.
They have tapped into the glory days of first-wave emo and post-rock and have re-invented the wheel without the tears.

Low Pass
2nd Demo
Self Released
Low-Pass = Sharks Keep Moving + Minus The Bear
Arguably the best female drummer in the indie world today, Sannomiya Hiroe stands about five feet tall. In high school she wore weights on her arms and legs so she could gain the strength necessary to compete with all the male drummers. It is this attitude that permeates through the band and makes them the penultimate performers of instrumental indie rock. The songs are moody and meticulously designed, and contain enough positive energy to turn even the saddest emo happy.

Hosome
New Fascio
iscollagecollective
Street: 02.14.08
Hosome = O. Lamm + They Might Be Giants + Polysics
Their live show is explosive and short—they played for approximately 12 minutes, and while I was elated to be a part of it, I don’t think I could have handled much more than that. The sound was more overwhelming than many speed-core bands I have seen. It was like experiencing an anime cartoon that accidently snorted a pound of amphetamine and tried to hold everything together. It was sensory overload, but the inspiring kind.

A Picture of Her
A Fanatic Socialist Looked Up At The Stars
Friend of Mine Records
Street: 06.02
A Picture of Her = Cross My Heart + Minus The Bear
A Picture of Her rides the line of emotive indie rock and mathematically-based polyrhythm. They move through their EP with ease and grace, while making sure to color the walls they pass as vibrantly as possible. Their songs are a fresh take on the glory days of emo, without the annoyances of falsely pinched whining.