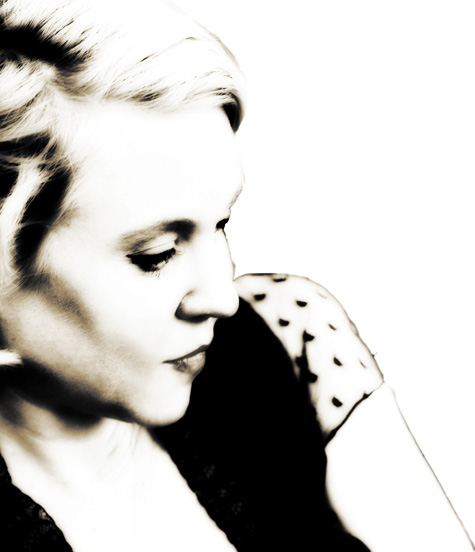 Forgetting the Rules with Kristin Hersh

Kristin Hersh is a super force of nature. My own introduction to Hersh was in 1987 when my sister came running into the house waving a video cassette containing the music video to the song “Fish” by Hersh’s first band Throwing Muses.  I watched it and I was harpooned.  To a group of weirdo kids growing up in the bonkers environment of deepest, darkest Utah Valley, Throwing Muses were the perfect tonic.  They were different from any other band, and their music was powerful.  Intentional or not, the songs always left room for the imagination.  They were never handed over prepackaged in obvious narratives and expected structures.  We felt free to fill in the gaps and form our own relationships with the songs.

In the 90s Hersh began releasing solo work, more acoustic though no less powerful than Throwing Muses.  Her first solo single, “Your Ghost” (featuring Michael Stipe on back up vocals) will leave you sitting silent and feeling a bit stirred up.  Many fantastic solo albums have followed and she’s toured extensively in support of them.  More recently Hersh has been making an unwholesome but oh-so-satisfying noise with her new band 50 Foot Wave.  She’s written a children’s book and a memoir from the early days of Throwing Muses.  On a recent spring day I got to pester her over the phone for a few minutes and get all the juicy gossip.

SLUG:  You started Throwing Muses as a teenager in Rhode Island in the 80s.  What inspired you to make music and to make it in such an unconventional way?
Kristin Hersh:  Oh man, that’s actually a hard question.   I have no idea why a little kid would start a band so I’m thinking … boredom.  After having played guitar since I was a really little kid and then taking classical guitar for many years, I realized that in order to play with the voice you would have if you grew up on a desert island without a radio you need to forget rules––one by one if necessary––but it’s very important to forget rules.  Otherwise, you don’t have a lump of clay in front of you when you begin.  Imitators are guilty of not forgetting rules and I didn’t want to be an imitator.  It really shouldn’t take a lot of work to find your voice but in my case it did because I had learned so much about guitar and music theory that my lump of clay was distorted.  You can’t be ashamed of your idiosyncrasies.  We’re all idiosyncratic.  Most of us keep it to ourselves, but a band plays their unusual qualities out loud. That can be embarrassing.

SLUG:  From your journal entries of the period [to be published as Paradoxical Undressing in the UK and as Rat Girl stateside], it sounds like the early years of Throwing Muses were quite an adventure.  You were homeless and squatting in an empty and purportedly haunted apartment, taking college courses with Hollywood actress Betty Hutton, and becoming a mother.  Could you tell me a bit about that time?
KH:  It’s actually the only year I kept a diary and the book is about that time.  I don’t think it’s any more striking than anybody else’s life, particularly since it was a year where nothing really happened.  A lot of things began.  It was a year that I tried very hard to forget and yet this diary wouldn’t let me forget it.  I kept it as a bad luck charm hoping that history wouldn’t repeat itself if I was familiar enough with it. I found that I was not to blame ultimately, that I wasn’t a hateful person, it’s just some hateful things happened to me, that’s all. It was very funny because the Muses were very funny and that was important to us.  I found this old diary charming because it was 20 years old and it wasn’t me anymore.  I expanded on it and turned it into a book.  I worked on it for three years and it was nice. I actually got to remember some people that had died.  Betty died while I was writing the book and my friend Mark died while I was writing it.  It was very easy to hear people’s voices and for memories to play out.  I suppose that’s what catharsis is all about.  It was just a far more gentle catharsis than 50 Foot Wave or Throwing Muses ever was.

SLUG:  I’m glad you kept it.  Reading it reminds you that life is really funny and it’s all just perspective.
KH:  Life is really funny! People are crazy.  It’s hilarious and life is goofy. That’s really important to me.  I think goofiness is underrated.

SLUG:  I noticed with Throwing Muses everybody seemed to focus on the supposed non-stop trauma, though my friends and I always thought of it as joyful and funny.
KH:  That’s so good to hear!  So did we.  We thought it was celebratory.  It was a big party­­––it was intense, but anything meaningful is intense.  People thought we were so dark.  I just never heard us that way, and now 50 Foot Wave is thought to be such an angry noise rock band.  I didn’t see that coming.  You make every musical decision for beauty, so every measure is supposed to be intriguing and beautiful.  If it’s not intense, how beautiful can it be?  We were so confused when we’d meet our fans. People hated us when they met us because we were just little blonde goof balls who never stopped laughing and dressed really badly. They always seemed so disappointed when they met us.

SLUG:  In the 90s you started releasing solo material including an album of Appalachian songs.  You tour extensively as a solo artist, sometimes even playing shows in people’s living rooms.  How do the solo aspects of your work compare to the experience of working in Throwing Muses or 50ft Wave?
KH:  Music is just music.  It doesn’t feel different to me stylistically.  I know that there are differences in the production of those three approaches and that’s why there are three different approaches, yet when you’re playing you’re just right there moving along with the song and you believe it so you take its trip.  I don’t really hear the sonic vocabulary of it until I’m wearing the producer hat and I have to respond and make decisions.  The songs do seem to want to sound one way or another.  I need Throwing Muses to play the tangled intricate poetic pieces that are written on my strat or my tele and I need 50 Foot Wave to play the power rock. There are intricacies to 50 Foot Wave that are harder to hear.  It’s a solid noisy approach and a lot of songs I write respond well to that sonic vocabulary so 50 Foot Wave needs to exist.  Then there are those that respond better to the acoustic pencil sketch treatment than to the bright, loud color-splash of the rock band so I have to be a solo artist sometimes too.

SLUG:  I discovered you were doing 50 Foot Wave by freaky chance. I happened to pick up a scrap of newspaper which described this new band of yours and that it was playing the next night at Kilby Court.  I frantically called around the grapevine to rally the troops.  I thought the place would be packed but only about 10 people showed up.  Your whole family was with you and you walked onto the stage looking like you could be a nice Mormon mom in pastel flip flops.  Then the flip flop slammed down on the guitar pedal and you guys let loose with one of the most powerful shows I’ve ever experienced.
KH:  I remember it well.  That was great.  It was in such an intriguing venue­––we’d never played in anything like that and we thought “this is the future of music”.  It makes more sense than the old fashioned rock clubs where people just go to get drunk.

SLUG:  You’ve worked through indie labels, major labels and have experimented in getting music directly to the fans, pioneering the pay-what-you-will idea that was later tried by Radiohead and others.  Where are you now with CASH Music and the virtual tip jar?
KH:  We had the tip jar before CASH started.  CASH is more subscription based donations for me on my page.  The other artists don’t necessarily use CASH tools in the same way I do.  All my recording costs are paid for by fans now in what is essentially an NPR model.  That means I don’t have to create radio songs, I don’t have to dumb anything down, I can be experimental and that’s pretty celebratory.  It’s going back to the beginning for me trying to unlearn rules and find my voice again.  It’s been really moving.  I put up a song a month for nothing and so many people subscribe to CASH that I can afford to continue.  It’s a great way to work and it means that people really listen.  I get a lot of feedback.  I put up my stems for remixes, people make films with the songs and they send them in.  They share their work with us making it even more of a community.  Yet even with people sending in their paintings and their films and their remixes, I get more of a sense that I’m working in a vacuum––which is perfect for me.  I always had to fool myself into thinking that nobody would ever hear what I did so that I could be honest with it.  Now I think  it’s because I feel more like a scientist than an entertainer so I go into the lab and I do my work, but  if your sponsor is attached to the outcome being marketable in some way, if it doesn’t  alter your results, it’s gonna fuck with your head.  It’s gonna do something lousy to affect the work.  Now my sponsors are only attached to the truth of the outcome.  They just want it to be truthful and honest.  Quality is of course inherent in those two things.

SLUG:  You’ve written a children’s book [Toby Snax], the memoir [Rat Girl], you’ve reformed Throwing Muses for a series of shows. You play many solo shows and you have 50 Foot Wave.  What magic power drives you? Or is it something dragging you along?
KH:  I hear the songs I write and just copy them down.  I don’t sit down and write songs on purpose with the idea of selling them in any way.  I just happen to have songs in my life and I’m obsessed with music so I play it.  The books are different.  The books came about through trickery on the part of others (laughs) fooling me into doing them.  The children’s book I just wrote for my son, and my literary agent said “give me that bunny book and I’ll sell that.”  Now I go to meetings about ‘The Bunny Book.’

50 Foot Wave’s new EP is titled Power and Light. To celebrate its release, all of 50 Foot Wave’s recordings are available FREE for download.  Go to 50footwave.cashmusic.org and click the FREEMUSIC button.  Have a look at kristinhersh.com, and browse the youtubes and myspaces.  You too may get harpooned.