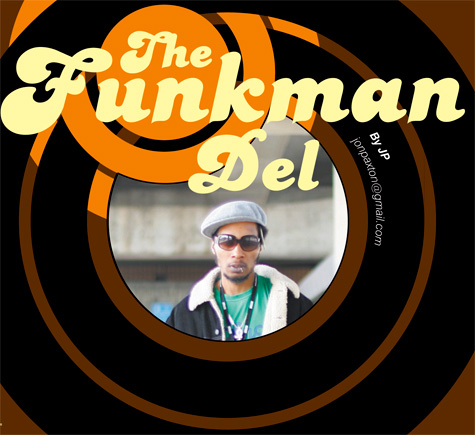 The Re-Emergence of the Funkiest Thing Since P-Funk: The Funkman Del

Del, Deltron, The Funky (or Funkee) Homosapien. Maybe too many names for one man, but he wears them all with panache. If you ask Del the Funky Homosapien if an honorific like “Mr” needs to be put in front of those monikers, though, he’ll just laugh and say, “You can just call me Del, man.”

An almost two-decade long career in the rap/hip hop world is almost unheard of, but Del is still in “the game” after all the fads––and the current, shitty state of affairs in the rap world­––have proceeded to new depths. “People don’t expect anything from rap music at this point, because the expectation level is so low. Now I feel it’s just a vehicle for people to make money,” Del says. “After years of people buying these whips and ships and trips it’s ridiculous.”

Del even takes his streak as an independent entity one step further: he does his own production on almost all of his work and it is still damn good. But Del still keeps it in proper perspective. “I feel like I’m just starting. It can take a real artist, a musical artist, 20 years to get into their groove,” he says. “Before, I was a kid making sounds on a drum machine. I’ve studied music theory for about 10 years now and I actually know what I’m doing. I’m in a different place.” And thankfully that place is far away from wherever the fuck the other pretenda-artists in the industry currently reside, either being scammed by their labels or busy scamming their fans with sub-par music. Del has eschewed both routes by deciding to release his latest album for free at: delthefunkyhomosapien.bandcamp.com.

Unfortunately, people drinking “hate juice” put Del in a soul-searching mind frame before he released his seventh solo album for free. “I was kinda scared because people are so jaded nowadays. I felt people would say ‘Oh you’re trying something,’ yaknowhatI’msayin?” he says. “But I’m not trying nothing­­––you’re not gonna buy it. I might as well put it out if people aren’t gonna buy it. I’m not stupid – I’ve seen the download game. But people have come up to me and said good things about it so far.” As they should. Funk Man is classic Del down to the sixth track, “I’m Smelling Myself.”

There isn’t any sort of donation scheme or deluxe edition to entice fans into buying the album later. The business model Del is going for is the worst kind of business model: the kind that doesn’t generate any money. He is the kind of artist that genuinely needs to make the art. “I make a lot of music. I make music every day––that’s my release,” he says,  “I put it out there for free because ultimately an artist wants people to hear it. I make so much of it. I’ve got like albums stacked up now.”

And Del is bringing all of that decades-plus music to the Urban Lounge on May 18. Touring and merch may be the only way for this guy to break even with the album not being on sale. Del may not be that happy about the tour grind. Some musicians like to inflate touring as a glorious event full of debauchery but Del shares an honest sentiment about it, saying, “It takes a lot out of me. The traveling, eating the bad food. There’s worse things I could be doing for a living. It ain’t that bad, but it takes a toll on my body. It’s a lot of work for me.”

Del seems like the kind of producer/emcee who can just get lost fucking a beat for hours and just live in the studio. But in case you think he won’t put on a good show, be advised against that line of reasoning, because Del always delivers. He brings the unwary a great experience with, what he says will be, “Some of my classics if you can call ‘em that. Stuff from Deltron 3030, stuff from Gorillaz, stuff from all my albums. There’s spots where we improvise in the show. I do my own thing every night, you really don’t know what I might do,” Del says.

If you’re really questioning Del’s dedication to his job and his message, don’t stress. His last words to SLUG: “’Do you love music, do you love doing it?’ I think that is the one question that nobody asks. And the answer is ‘yes.’ I would do it if I get paid or not. Getting paid for it is a nice benefit but that’s not why I do it.”

Check out Del on May 18 at The Urban Lounge with A-Plus, Bukue One and Mike Relm 9 p.m.