Ghost emerged in 2008, playing live shows clad in cloaks with their faces covered, their frontman adorned in a demonic pope outfit and skull-painted face. Speculation immediately came from fans and cynics: Are Ghost a gimmick, or something more sinister? In an interview with one of Ghost’s Nameless Ghouls, I attempted to unravel the mystery behind the band. 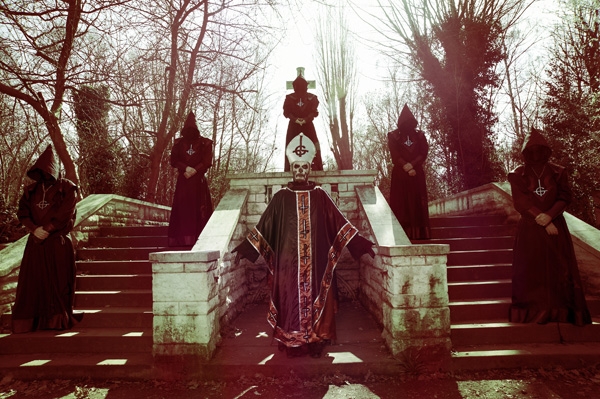 “Our conjuration sings infernal psalms and smear the smudge in bleeding palms.” These words come soothing and rumbling from “Con Clavi Con Dio,” the second track from Ghost’s Opus Eponymous. The entire debut album from Sweden’s band of nameless ghouls plays out like a black mass deceptively delivered as a pop-inspired rock n’ roll entity.

Ghost emerged in 2008, playing live shows clad in cloaks with their faces covered, their frontman adorned in a demonic pope outfit and skull-painted face. Speculation immediately came from fans and cynics: Are Ghost a gimmick, or something more sinister? Gimmick or not, Ghost have an album of solid rock tunes influenced heavily by ’70s rock, pushed by catchy riffs and rhythms, wrapped up with an eerie but fun vocal style. The album and Ghost’s live shows have been turning heads since Darkthrone’s Fenriz gave the band a nod as one of his favorite bands in a 2010 interview and since more popular metal culprits such as James Hetfield have been seen wearing Ghost T-shirts—it always helps to have friends in high and evil places. In an interview with one of Ghost’s Nameless Ghouls, I attempted to unravel the mystery behind the band.

SLUG: On the upcoming tour, Ghost will be performing in Salt Lake City—the home turf of the LDS Church. Did you see this as a challenge to Ghost’s satanic message?
Nameless Ghoul: Obviously we are a band with ambition. We believe in spreading our message and our concept and our show on a worldwide basis—there are very few cities and regions that you wish to exclude. Albeit that Utah and Salt Lake City are known worldwide for having such a Christian stronghold, isn’t it true that you have a quite strong and large hardcore and metal following there?

SLUG: We do.
Ghoul: Obviously everything goes according to a plan, whether it be a sort of philosophical one or just a geographical one. We would never exclude a city just because it’s a Christian stronghold, especially in a civilized part of the world. I mean it’s one thing playing in Jordan or Syria—then we’re talking about something different. It’s just according to the plan to bring our gospels to America and manifest what Ghost does for the first time.

SLUG: Many bands use theatrics as part of their live show, but the music should stand evenly with the visual elements—a lot of bands fail on one level or the other. What makes Ghost’s live ritual unique?
Ghoul: We’re trying to build a very theatrical bubble around everything that we do. It’s supposed to be something that you walk into and there is supposed to be stimulation for your eyes, ears and nose. I think that is probably where we differ from a lot of other bands, because we’re approaching what we do with a very theatrical and almost cinematic way, albeit as a rock n’ roll show. We want to tickle the same nerve that a filmmaker tries to tickle when they create a film like The Omen or The Exorcist or any kind of occult type film. We’re doing music first and foremost—had we not had the songs, it would be a bit harder to pull off just by dressing up in Halloween costumes. It’s supposed to be something grandiose and extreme and something different—not better or worse, higher or lower, just different.

SLUG: It’s been said that one of the missions of Ghost is to corrupt the righteous with your rock music, but your fan base might mostly already be terribly corrupted. Does Ghost have any further plans to corrupt the supposed incorruptible?
Ghoul: I guess that goes along with being successful sort of above the smallest, most underground and devoted groups out there. Once you’ve gone beyond them, that usually means the people aren’t necessarily subjected to Satanic music on a day-to-day basis. Speaking from someone that has actually seen the crowd, I’d say there are a lot of people that have been exposed to this who are not usually associated with bands that are very devil-embraced. However, rock n’ roll is devil-embraced—one of the first bringers of the Satanic message was probably Elvis Presley.

SLUG: Satanism is viewed in massively different ways by different cultures. What is the main purpose behind your Satanic message? Do you believe in Satan as he is described by Christianity, or in a different way?
Ghoul: The most important thing for us is basically that Satan believes in us.

Join Ghost and their musical black mass as their first North American headlining tour rolls into town on Jan. 28 at The Complex with the brilliant doom and gloom coming from the stellar support acts Blood Ceremony and Ancient VVisdom.