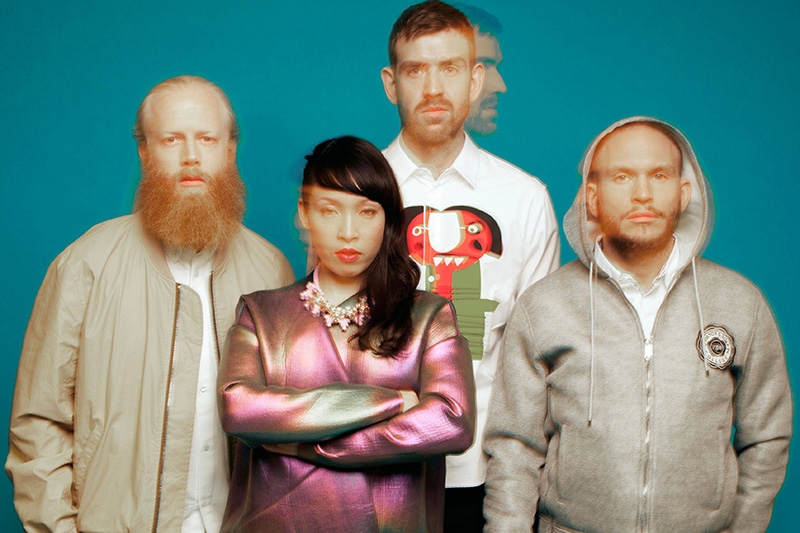 Little Dragon is a band from Sweden that features plenty of electro beats and the soulful singing of Yukimi Nagano. In preparation for their Salt Lake show, I had the chance to trade emails with Fredrik Wallin, Little Dragon’s keyboardist. The bandmates met in high school, they are pretty much a family. They lived in the same dwelling for a number of years, which has now been turned into their Gothenburg studio. Wallin gave me some insight into the process of the new album and some very creative answers.

SLUG: Your new album is available to listen to for free on Little Dragon’s YouTube channel. What made you decide to do this?
Little Dragon: Well, we knew that people would put it up there anyway, so why not be nice & put it out there in good quality. Most people tend to stream music these days. Hopefully, listening to it will make them want to buy our album and come out to one of our shows.

SLUG:Nabuma Rubberband is your fourth studio album, how long did it take to record compared to your other LPs?
Little Dragon: Since we record & produce as we write it’s hard to boil down the amount of time. Between early 2012 and late 2014 we made at least 50 different beats, songs and sketches. 12 of them made it to the album. Ten of the other songs couldn’t be agreed on and the rest was destroyed coz they were basically too funky for ya body.

SLUG: Was the whole album recorded at the Gothenburg Studio?
Little Dragon: No. Some of it was recorded in Fred’s super cool Berlin studio. But mostly in Gbg, yes.

SLUG: If your studio became a historical museum, like Abe Lincoln’s log cabin, what would tourists stop and take a look at for the longest? And what would the plaque say to describe it?
Little Dragon: The homemade bass-trap with mini plastic soldiers glued on & a pink peace sign sprayed on top. Plaque would say, “Now that’s a bass-trap.” Fyi: Bass trap is used to treat acoustics in a room for maximum BOOOM later on.

SLUG: If I ever want to go to a concert or have some fun, where are some places in Sweden that I need to check out?
Little Dragon: Concerts can be fun too sometimes. Our hometown Gothenburg is a good spot for sure. People tend to be friendly & curious. Underground party scene is popping right now. The other cities are not even trying.

SLUG: Any similarities between Salt Lake and your home town?
Little Dragon: Yes, similar in size & we also have a pretty good film festival. There are large bodies of salt water. Not as salty as yours though.

SLUG: I know that Little Dragon is a fan of hip-hop and have even collaborated with Big Boi on one of his tracks. Which is your favorite Outkast album?
Little Dragon: Stankonia or Speakerboxxx/The love below

SLUG: Is bad art inspiring?
Little Dragon: It can be, if it inspires you to create or if it makes you laugh. SLUG: Håkan equipment rundown? Warrin: Synths, effects & beard.

SLUG: Will there be an accordion onstage at the Salt Lake show?
Little Dragon: If someone puts it there…yes. Will we play a version of “Tico-tico” on it? Come and find out!

SLUG: How did you meet your manager, Guy Trezise?
Little Dragon: Never met him. He communicates through a carrier pigeon. No but seriously, he appeared out of nowhere during a night’s stay at an eerie castle in Scotland. The cape was a bit intimidating at first but we don’t really talk about it anymore.

SLUG: Any thoughts on Moog?
Little Dragon: Yes, should we perhaps get some more of them? Probably.

SLUG: Who has the best hair?
Little Dragon: There is hair for every flava. Little Dragon has blond, dark, stylish & slightly barren. Not to forget, facial!

SLUG: Have you guys ever found yourselves being too aggressive when creating a song and had to tone it down?
Little Dragon: Yes, once before first album. It was like, ‘Whoa!’

SLUG: Yukimi, you seem very fashion-oriented given your affection towards Kumiko Watari, Christopher Kane, Opening Ceremony and others. Would a clothing brand be a possible creative outlet for you after Little Dragon?
Little Dragon: Yukimi is out at the moment but I’m (Fred) actually working on a stylish new pajama collection. I’m gonna collaborate with other artists on it, first out is PJ Harvey. Pharrell has been pushing to get onboard but I’m like “come on man, chill”

SLUG: You said in an interview with Studio Q a couple years ago that there is no scene where you are from and that Yukimi had no idea that death metal is huge in Gothenburg. Do you feel that Swedes keep to themselves more than other cultures, and if so, why?
Little Dragon: Yes, we only communicate with strangers when we’re drunk. And if we meet other swedes abroad, look away & keep walking. This is my spot damn it!

SLUG: Your song “Precious” is one of my favorite songs. It has a certain dub ambiance that I enjoy. Could you explain the creative process on that particular song?
Little Dragon: Thank you! That song is one of my favs as well. Master Bodin laying down a fat beat then all of a sudden things went berserk.

SLUG: What are you excited about for the new album?
Little Dragon: Making it & banging it out loud!

SLUG: What should the Salt Lake crowd expect from a Little Dragon show?
Little Dragon: The show will have everything you need, a medley of really nice hair & homemade songs from our catalog. Aka a Popping fun time!

If you want to see some of the best hair on the biz, Little Dragon will be at The Complex on Oct. 22.