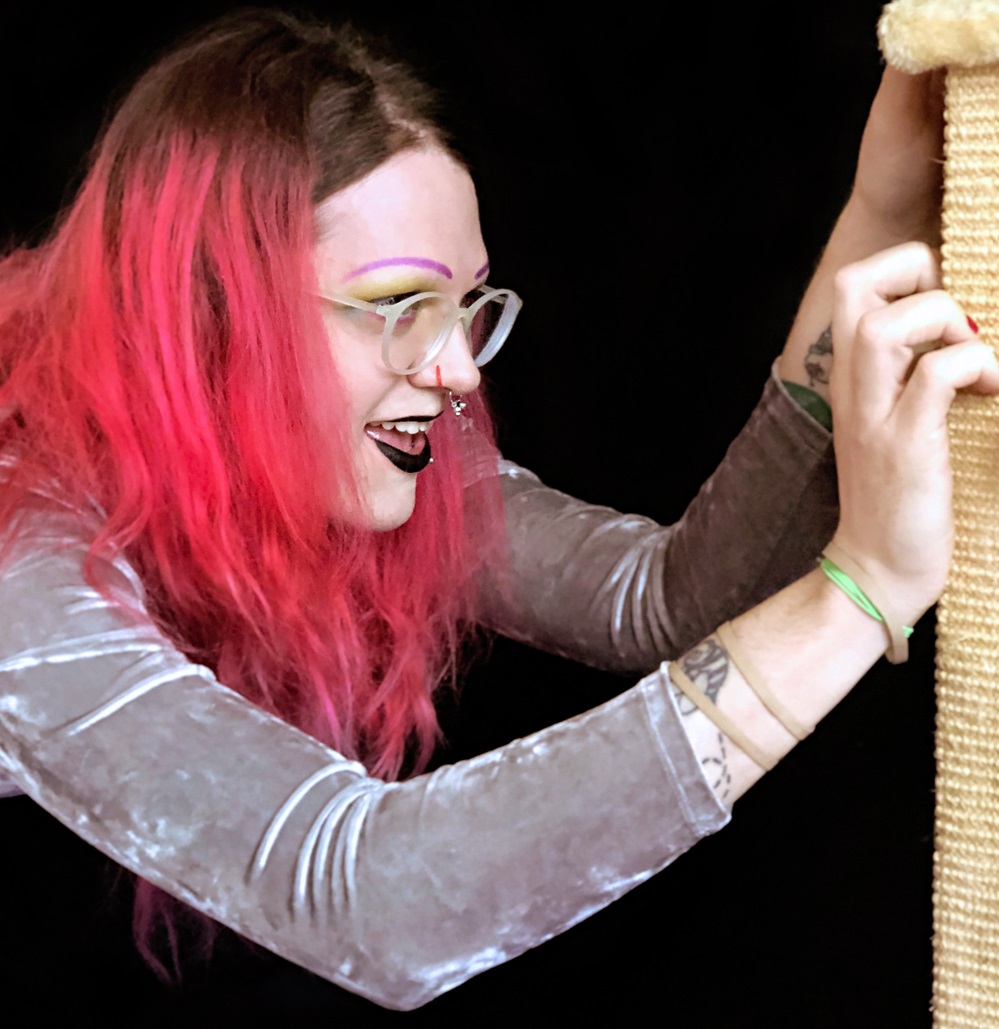 Infinity and “I”: An interview with Fire-Toolz

Sometimes you encounter music that opens your ears to new possibilities in such a way that your subconscious burns the moment of impact into your memory. For me, the most potent of these include an early adolescent exposure to the cyclic, minimalist bliss of Miles Davis’ In a Silent Way as in-between-set music at a neighborhood basement show, doubling over laughing with my sister on our drive to school at the vocal-sourced percussion of Björk’s “Where is the Line?”, and having my 19-year-old shit permanently rocked amid my (still) daily breakfast of eggs and oatmeal by the opening few tracks of Fire-Toolz’ Drip Mental.

At least to my ears at that time, the breakneck transitions between Mego-style avant-pop glitches, digitized metal skree, snapshots of vapor memories and scream-led dance pop offered up a vision of shape-shifting music that felt wholly new, almost sacred in its profane blend of styles and sound. “To me, that constantly shifting atmosphere and mood is the ebb and flow you perceive,” says Angel Marcloid, the face behind the Fire-Toolz moniker. “Lots of waves and conditions to pass through, but they all make sense to me … Ideas flow out of me with absolutely no effort made, my body records as many of them as it can and the song gets built in little bits at a time.” The idea of musical “sense” might seem at-odds with the free-wheeling, genre-agnostic sounds of a Fire-Toolz album, but sustained exposure breeds familiarity: By the time I rolled around to my third or fourth listen through Drip Mental, the chaos began to cohere into a logical world of its own.

If my ears grown more accustomed to the utter uniqueness of Marcloid’s art, so too does it seem that “Fire-Toolz” is becoming a musical language of its own. Every new release brings the euphoria of Marcloid’s music toward higher and more mind-bending plans, and nowhere is this more true than on Rainbow Bridge, Marcloid’s new album for Hausu Mountain. The music is distinctly Marcloid, taking the same hallmarks I found on Drip Mental and refining them into sharp gems. A monophonic hymn drives “⌈Mego⌉ ≜ Maitrī,” making for one of the most patient and profound Fire-Toolz composition to date. At the other end, “Rainbow ∞ Bridge” hurls in with synthesized black metal fervor before it combusts into a grooving, tuneful section of electronics. A soaring electronic guitar solo dominates the middle third, and the track eventually loops around on itself into the ear-splitting pulses and crashes of the opening. “It’s less stitching sounds together, and more like inventing gigantic puzzles made of both large and tiny pieces dancing around and overlapping each other, interacting with each other,” Marcloid says of this segmented composition process.

A standout sonic quality of Fire-Toolz’ music—on Rainbow Bridge and all its older siblings—is its embrace of the sounds, chord structures of new age, jazz fusion, prog and a host of other styles based around extreme musicianship, and exacting production. Born in 1984, Marcloid finds that many of these sounds are inseparable from the nostalgia of her childhood. “I wasn’t raised on jazz or electro-pop or adult contemporary or electronic music, but in the distance, there it all was—in waiting rooms, in the background of movies, at the mall, in TV shows, in educational films, in video games, in my friends’ parents’ vans,” she says. These musical encounters all share a sense of accidents. From muzak to soundtracks to chance encounters, Marcloid never supposed to take this stuff in.

“Lots of waves and conditions to pass through, but they all make sense to me.”

Though that’s precisely the path she took, and Fire-Toolz takes a magnifying glass to these background sounds and exposes their inherent beauty and strangeness. “Because of the internet, and having the privilege of being able to access those sounds and use them creatively, I am living out my second childhood in a heartfelt, authentic way,” she says. This “second childhood” is an apt analogy for the giddiness that Fire-Toolz music exudes. These sounds and harmonies are familiar—some would argue overused and tired—but Marcloid approaches them with a renewed sense of optimism. At their core, these styles hunt for religious ecstasy and otherworldly piece, cosmic qualities that Marcloid’s art exudes with boundless glee.

These ideals of grandiosity that run rampant through Marcloid’s music also appear in the conceptual and philisophical framework surrounding the Fire-Toolz project. The track titles alone convey this sense of out-of-body msyticism. Through a combination of between cheeky, internet-based puns, dense transcendental philosophy and creative linguistic construction through the use of atypical spellings, punctuation and word structuring, Marcloid constructs a verbal world inside which her singular music lives. “Infinity and wholeness is a constant theme, but it is by default. It is a framework from which I operate,” she says. “I’m on a journey; steadily growing every day, until my body no longer works. I’m not even saying I’m getting better and better, but I’m always changing. I’m constantly falling, and there is no ground.”

Stand out examples of these constructions from the past include the warm, nostalgic hum of Skinless X-1‘s “In The Computer Room @ Dusk ☕” or the scattered sonic metamorphosis of “Fluids Come Together & The ‘I Am’ Appears.” On Rainbow Bridge, one of the most stunning realizations comes on “dEcRePiT φ PhOeNiX,” a track which Marcloid says  “is a direct reference to myself and evolution. A decrepit phoenix is kind of how I see my body-mind and personality. Always escaping from the ashes, sore and tired … But, a phoenix nonetheless.” With its wobbling chromatic synthesizer melodies and arena-ready drum slaps, the music presents a colorful foundation atop which Marcloid’s screamed vocals delve head first into this beautiful crisis of change: “Melted and melded and molding crashes / Illusion of self reduced to ashes,” she sings, highlighting the twin agents of destruction and rebirth that accompany any process of change.

While these ideas might traverse the breadth of Fire-Toolz’ discography, the new album places the themes in a more specific context. “For Rainbow Bridge, I felt like I had an enormous amount I needed to say and express; so many questions to ask, and expressions of energy I needed to release. I just make music with that in mind,” says Marcloid. Specifically, “the title references the pathway that our pets take when they leave us. My cat Breakfast, who passed away in December of 2018, is the talking point of the album. A lot of it is about her, or speaking to her.” Breakfast also appears on the album (as she has on a number of previous Fire-Toolz releases), creating a sort of living/lasting artistic tribute to the lost friend. In this light, the epic constructions feel even more special, as if the explosions of colorful sounds on Rainbow Bridge are paeans to Breakfast. The songs build towers that stretch toward the bridge in search of communication.

“Infinity and wholeness is a constant theme, but it is by default. It is a framework from which I operate.”

“Fire-Toolz has always been sincere,” Marcloid says. “Melodramatically sincere.” It’s this sincerity that’s kept me coming back time and time again after that fateful February morning encounter. Especially at its most bombastic and indulgent (see: the sing-along chorus of Rainbow Bridge‘s “It’s Now Safe to Turn Off Your Computer,” the neon, fusion-drenched guitar outro “Clear Light” off 2019’s Field Whispers (Into the Crystal Palace)), Marcloid’s music teethes with a sense of purpose and meaning. What might illicit chuckles of disbelief upon first encounter transforms into a beautiful sonic odyssey that offers more intruige and magic over time.

Like each and every Fire-Toolz album, Rainbow Bridge is a mind-bending excursion that blows up music into a cosmic, surreal land, and it’s only the tip of the iceberg: In the last year or so alone, Marcloid has put out equally incredible music through her MindSpring Memories, Angelwings Marmalade, Nonlocal Forecast and Path to Lobster Believers projects, as well as a host of  mastering jobs (some personal favorites include The Car? and w i n t e r q u i l t 愛が止ま). A number of these projects (including Fire-Toolz) have future releases already in progress, and there’s a high chance I’ve even left of a name or two in this list. If this seems like this stretches the limits of what one entity can perform and produce, Marcloid suggests that there’s other energy at play: “Something tells me it’s not me doing it. ‘Me’ in the individuated sense,” she says. “It feels more like something I am a part of is doing it through me.” What form this ancillary force might take is unbeknownst to anyone save Marcloid, but let’s hope their fruitful collaborations continue for years into the future. We’ll always need more rapturous shock; we’ll always need more Fire-Toolz, ad infinitum.