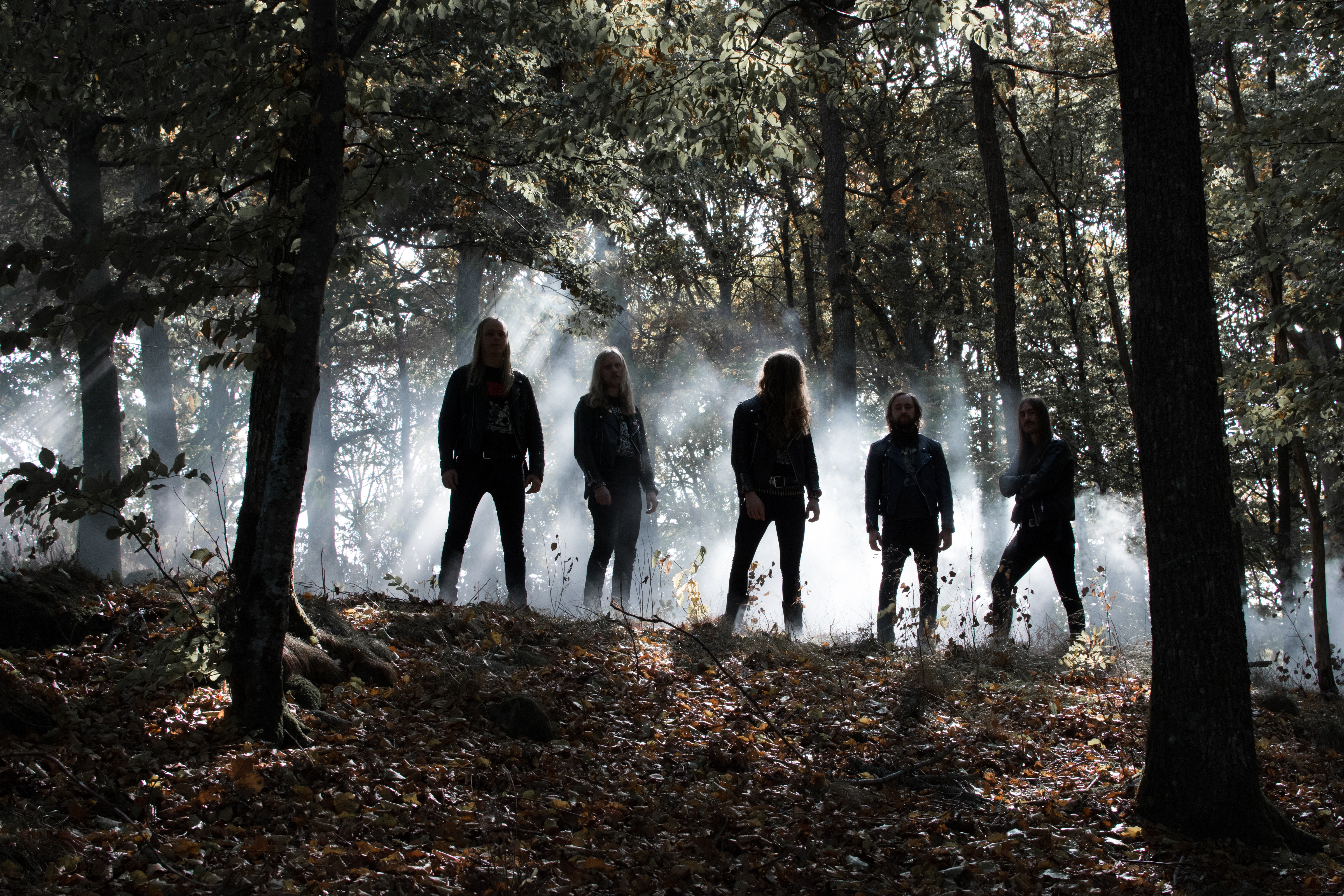 It feels like a privilege to get some questions answered by the not-so-self-promoting Swedish thrash attack that is Antichrist. It’s a rare insight into a band that largely keeps internet information sparse other than when they are playing shows—in an age where most bands use every nugget of cyberspace to talk about their band. They’ve got a show coming up at the Urban Lounge on July 10 with Visigoth, Goat Disciple and Envenom. This is one of those shows that reminds folks how alive the underground is, and word of mouth is a more powerful tool than any major label or sponsor backing. Antichrist have a new album Sinful Birth full of ugly speedy-thrash disdain drenched in a foggy guitar reverb. The power of the word of mouth, for Antichrist, manifests in the fact that their music is so strong that it promotes itself. The quintet dishes out an old-school thrash style that doesn’t rehash the old gods of thrash. Also, lyrics heavily revolve around cult horror films. Guitarist Gabriel Forslund offers insight into the thrash mystique of Antichrist.

SLUG: Your first demo came out eight years ago. How have things been for the band since you first released that demo up till now with two full-length albums?
Antichrist: It’s been alright, I guess. The only thing that sucks is that we’re all spread out in different cities across Sweden. That results in a very limited amount of time to work on new material together, as you might understand.

SLUG: This whole media-coined term “thrash revivalism” has been around for a long time now. The only reason I feel that the term or variations of it exists is because so many bands, for over a decade now, commit themselves to sounding similar to classic bands. When you started, what was your motivation to sound how you sound?
Antichrist: Our motivation was just our own ideas, I would say. We’ve never been a band that wants to be like another band from the past. Of course, we’ve been inspired by a lot of bands from the ’80s and even further back in time. I guess we were tired of all the lame new thrash that just uses the same boring riffs and sing about eating pizza and smoking weed. Fuck that.

SLUG: Sinful Birth has just been released. From what I have listened to and compared to your first full-length, there is just a big difference in production. It’s a bit cleaner and has a bit more bulk to its sound than Forbidden World. What did you do differently for the new album that you may have wanted to and couldn’t for the last album?
Antichrist: We worked with a great guy who really gave us a lot of freedom in the studio. Then we also used some great amplifiers this time. On Forbidden World, we had a million problems in the studio with the amplifiers. Also, back then, we worked with people that really didn’t understand or share our vision of how the album was meant to be.

SLUG: I’m asking even though it feels obvious: The last record, Forbidden World, it’s named after the film, right? I assume because in the interviews I found online—with Iron Fist Zine—you mentioned a love of horror films. How does that love find its way into your music?
Antichrist: It affects not the creation of single riffs but more the overall sound and feeling of one song. It also has its way to inspire us when it comes to write lyrics. A lot of our lyrics are inspired by films— not mainly a whole film, but more the ingredients of one.

SLUG: Is this U.S. tour you’re doing the first tour you have done in the States? If you have toured here before, how has the response been here compared to in Europe?
Antichrist: No, it’s our second tour over here. In general it’s been really good. People over here seem to be much hungrier for and more enthusiastic about our sound. I guess the crowd here is a bit more open minded, and also they’re probably not used to the way we do things, so for them it’s something “fresh.”

SLUG: Another nugget I found in the interviews I dug up: Iron Fist Zine and Noisey both mentioned this whole Fenriz “band of the week” thing as a big launching point for the band—those interviews seemed hugely to emphasize that as a launching point for your early years. Was that really a big deal for the band?
Antichrist: I don’t really know, but of course, it was a great way to reach out to new listeners in the underground. He’s a wise man with a good taste and a lot of followers, so yeah.

SLUG: One of my biggest admirations of your music is, I’d call it, fuzziness or a haze of reverb, I’d say, which seems to cover all of your songs. So many artists emphasize clear production sounds these days. In the early days of thrash metal, everything was analog, so it had that fuzz to it, which, for me, imparts that great live quality to the music. Question is: What is the main sonic quality you strive to achieve, recording and live?
Antichrist: Atmosphere and danger— the feeling of not being safe at all.

SLUG: You have an impressive, over-10-minutes-long instrumental track, “Chernobyl 1986,” on the new album. What was the inspiration behind the track, and does it/do you think it will ever make you live shows?
Antichrist: The inspiration was Eastern Block misery and pain. I guess there’ll come a time when we will play it live.

SLUG: I looked into Antichrist is because you’re playing a show in Salt Lake City, Utah. I found some older interviews you had done for some background, but your online presence is small. Is there any large or small reason that your online information presence is small—where so many bands these days use it as a huge promotion tool?
Antichrist: We’re not an internet band. We usually post when we’re about to play. I think promotion is great, but being used in a somewhat lame way in some cases. Like for example: Bands that never even rehearsed a song bragging about their new band on social media platforms. I hate that. Let the live shows and records do the talking.

SLUG: I fully believe that if a larger label had picked you up and there was widely dispersed press about the band, you would probably have a bigger following than you may have now. That said, the lack of information that exists about Antichrist is admirable. It’s a testament to the underground and the old-school style of simple word of mouth, where fans have to dig hard to find the great bands hiding in the underground. That said, would you ever consider a larger-label offer?
Antichrist: I don’t know. Usually, bigger labels are shit, in my opinion. It’s a real nasty business were a lot of smaller bands get fucked and run over by greedy people. There are some bigger labels that have been trying to convince us, but we’ve never got a real good deal from any of them. It’s more nice and a lot better to work with friends who run smaller labels

SLUG: What would you say your live show is like? Is there anything aside from your music and stage presence that makes seeing an Antichrist show something special?
Antichrist: Unpolished intensity. We’re not a professional band and everything can happen.

SLUG: What if anything would you describe as an ultimate success for the band?
Antichrist: Money, women, fast cars and huge mansions.

There is only one thing to do when Antichrist come to town, July 10 with Visigoth, Goat Disciple and Envenom at the Urban Lounge: Get your skull completely crushed. Just give “Savage Mutilations” a listen— everything is pummeling, riffs, drums, leads and vocals. It’s definitely a new mutilation of thrash/speed metal.