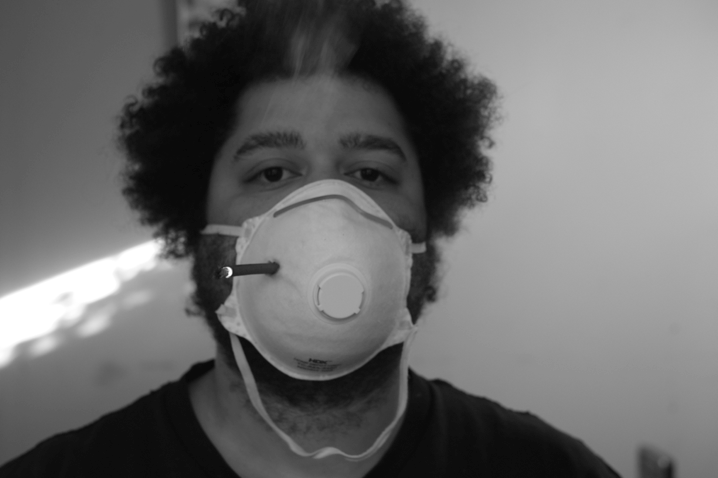 Photo courtesy of Kofi the Spiderman

SLUG is delighted to premiere February 21, the new album from experimental hip-hop artist Kofi the Spiderman. Listen to the album below, and check out our interview feature with the artist below.

In the three-and-a-half years since the dawn of their project, Kofi the Spiderman (the moniker of Lowell, Massachusetts–based musician Kofi Edzie) has amassed a hefty catalog bursting with divergent threads of avant-hip-hop experimentation. Started after the dissolution of their noise trio, Arty Slang, Edzie’s Kofi the Spiderman project showcases the artist’s glitching, disorienting production techniques alongside expressive vocal delivery. As comfortable with rhythmically free abstraction in the school of Ka or MIKE as they are barraging the listener with autotuned wails, Edzie’s releases to date assert their affinity for exploration and deviation.

Edzie has long long been an active member of the small music and arts scene in Lowell. Given its tight-knit nature, the communities surrounding noise, hip-hop, punk and other genres of music inevitably overlap with one another, a quality Edzie finds important in the formulation of their own musical voice. “You have a hip-hop show that was also a noise show that got opened by a hardcore band and then gets closed out by death metal or something,” they say, noting that the absence of strict lines leads their own taste to spread a similar gamut.

The genre-fluid scenery surrounding Edzie in turn informs their work as a solo artist, where they approach distanced and potentially conflicting sounds as mutual benefactors in their compositional toolkit. “I’ll be like, I want it to sound poppy here and I want it to quote hip-hop here; I want it to bring in these folk elements because I just happen to have an acoustic guitar and a banjo,” they say. On their self-produced 2020 release HomeSick, Edzie’s beats range from chilly IDM fare (opener “8 AM,” the crowd-chant-and-angelic-pad duet on “Skeleton Key”) to golden-age hip-hop wonkiness (the minor-key loops of “Brutus”), each element widening Edzie’s musical lens and deepening their bag of tricks.

Despite this determined lack of boundaries, Edzie still seeks cohesion in their music. “Part of the challenge is, how do you draw from so many influences but still have something that sounds cohesive?” they say. “I always just try to take from those influences but keep everything in balance.” In collecting and collating their range of musical desires, Edzie looks for sustained principles to guide the tenor of each release. “The first thing I try to do is look for [and] pick out an aesthetic [or] a theme,” they say, with these core foci ranging from a lingering, lo-fi haze over all of a project’s beats to a menagerie of distorted vocal effects (an increasingly common characteristic in Edzie’s music of late).

For their new release, the February 21 EP, Edzie chose a focus unlike any previous Kofi the Spiderman project: Where the musician self-produced all their previous efforts, the new EP brings on their friend and collaborator Sawtooth (Lillian Edith Martin) as the producer. “I didn’t wanna take over a project or feel like someone was working for me,” Edzie says of the mindset the pair adopted. “I wanted to be in a collaborative space where I was bouncing ideas off of someone else’s ideas.” The resultant process spanned several back-and-forths, each musician adding a layer to the base of Martin’s beats in turns. The producer brings a space-age quality to Edzie’s raps, notably more direct and hooky than previous Kofi the Spiderman projects. Edzie meets her in this clunking, cosmic realm, matching the icicle synthesizer stabs of “Piñata” with a driving menace in their flow and the drunk tumble of “Double Double” with a collective feeling reminiscent of ILOVEMAKONNEN’s breakout EP.

“I wanted to be in a collaborative space where I was bouncing ideas off of someone else’s ideas.”

While Edzie’s music and lyrics often touch on darkness, the artist ultimately views their art as a vehicle for perseverance and hope. “Sometimes your whole world can fall apart, but you can have one thing to hold on to that can carry you through the chaos and the destruction of what you’re experiencing,” they say, noting that their music-making has long held this position in their life. “Even though it can be dark and it can be disillusioned, I think just by existing and representing my self in songs I’m saying like, ‘Look, here I am. I exist and I’m still going.’ Maybe other people can take from that.”

February 21 is out now on Grimalkin Records. Find more of Edzie’s music at ktsm.bandcamp.com, and keep up with them on Instagram @kofithespiderman.