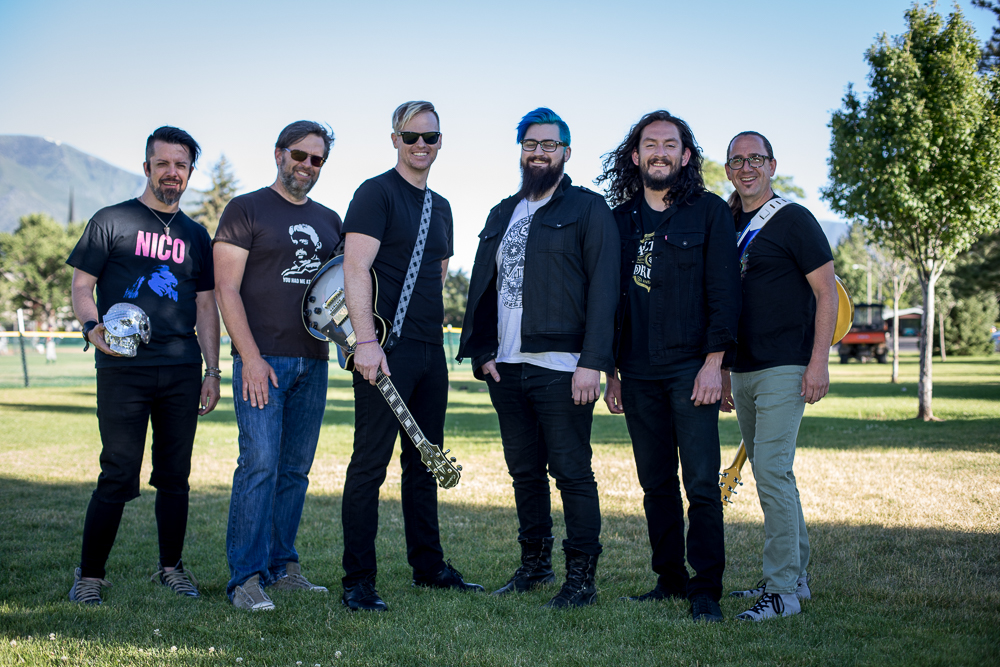 Intra-Venus & the Cosmonauts are Scott M. Stringham (vocalist and guitarist), Barret Ogden (bass), Peter Jones (keyboard), Felix Desposorio (drums) and Kevin Maynard (guitar), who replaced the original guitarist, Josh Ogzewalla, in 2015. Most of the members had been friends and involved in numerous musical projects together since junior high school. They all share a similar taste in music, and it’s apparent in their material. Influences such as Joy Division, Bauhaus or Bowie mix in with the styles of Kraftwerk or The Velvet Underground. Intra- Venus & the Cosmonauts also show off little twists with nods to Black Sabbath or The Cure with some Black Flag–styled hardcore—quite the unique concoction. In 2014, Intra-Venus & the Cosmonauts released Forgotten Stars, which was produced by David J of Bauhaus and Love and Rockets. They say, “An opportunity presented itself to us wherein we could engage David to play at a house party. We hired him, and he showed up and played a show with us in Scott’s living room. We were officially freaking out.” The next day, they asked J if he’d be willing to produce Forgotten Stars. Without any hesitation, J agreed. After sending J some demos and getting feedback, Intra-Venus & the Cosmonauts convened at Red Light Studios in SLC. The recording process lasted three weeks, resulting in an album and a lasting friendship with J.

After Forgotten Stars came out on Dec. 9, 2014, Intra-Venus & the Cosmonauts released the single “Sea of Dreams.” This single was a tribute to Ogzewalla who, sadly, passed away from cancer in April 2015. Since then, Maynard joined the group, and they have been working on new material for a followup LP. While waiting for that album to drop, be sure to check them out at the Craft Lake City DIY Festival at 5 p.m. on the SLUG Mag Stage. With regard to their performance, they say, “We are going to cram all the energy and experience of our 90-minute headline show into a shorter festival set.” –Nick Kuzmack