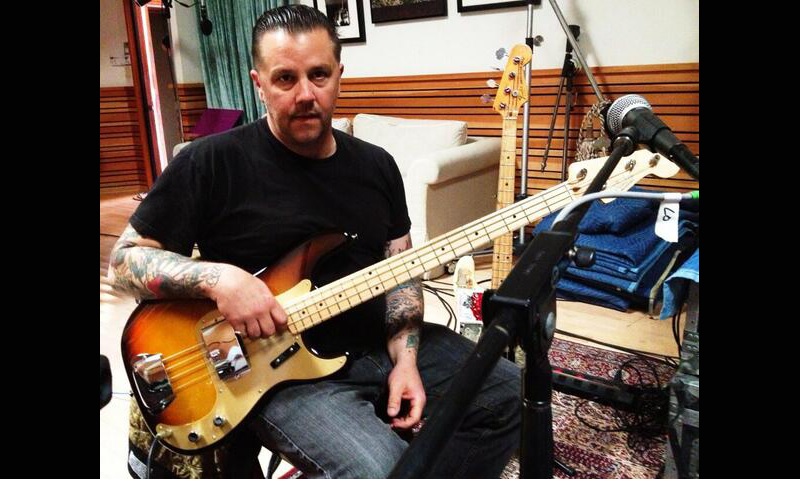 Just Another Fan on Stage: An Interview with Matt Freeman

Matt Freeman is the best bass player out there, and he’s been proving it for years in Rancid and, before that, in Operation Ivy. When longtime Social Distortion bassist John Maher quit in order to spend more time with his family, Social D went looking for a new bass player. Mike Ness went straight to the top and got the best: Enter Freeman.

[Matt Freeman]Being a punk rock aficionado (read: geek), I couldn’t let such an event go unmentioned. Matt Freeman joining Social Distortion and being able to talk to him about it was something fan boys like me thought they could only dream about. When news got around the office about my impending interview with Freeman, the envy from my fellow SLUG staffers (ha ha, Katie and Nate) was proof that I wasn’t alone in my thinking. So before I knew it, I found myself hiding in the photo-lab darkroom at SLUG HQ, sitting in a wheel chair (the only chair that would fit in the tiny space), interviewing Matt Freeman. Man.

SLUG: How is it touring without any of the Rancid guys for the first time in 14 years?

Matt: It was a little strange; the first day when I woke up, I was about ready to call Tim [Armstrong] and then it came to me; oh yeah, he’s not on this tour. But these are a good bunch of guys, and I feel really comfortable here. I mean, Rancid, those guys know me better than anybody, and like you said, we’ve been touring for 14 years, and me and Tim even longer than that, before when Rancid was Operation Ivy. Tim and I have known each other since we were little kids. But I feel really comfortable here. I never thought I’d do something like this, but it’s Social Distortion; I feel real honored to play bass for them, and I was just lucky enough to where Rancid was taking a little bit of a break. I mean, I love Social Distortion, dude. It’s a big thrill; I find myself singing along sometimes just like another fan.

SLUG: How did the guys in Rancid react when you told them you’d be playing in Social Distortion?

Matt: They were really stoked. Tim said, “You got to do that, man,” and Brett [Reed] was really stoked, and Lars was actually on tour, and Lars is a huge Social Distortion fan, and I played this joke on him. I hadn’t talked to him for a day or so and Lars calls me up and he’s just like, “Hey, what’s going on? So what’ve you been up to?” and I just say, “Social Distortion called me and wanted me to play bass for them, but I told them no.” There was just silence on the other end, and he says “Are you serious?” and I was just like, “Yeah, dude, I don’t want to do that” and anyway, he yells at me, “Are you fucking crazy? You call them back!” So then I told him I had said yes. So Lars was really stoked, and he came to some shows in Sacramento and he was like a little kid; he had a ball. It was really good.

SLUG: So are you a full-fledged member of Social Distortion?ok

Matt: They just came out with this record and I didn’t play on it. I’ve only done practices and now I’m on tour with them, and I’m going to play with them until it becomes a conflict with Rancid. I want to do it as long as I can.

SLUG: How well did you know Mike Ness and the band before you joined?

Matt: We’d met. Mike was in New York in ’96 and we were there touring with Rancid and we played “Telling Them,” and he came on stage and sang and played guitar, and I knew him from around. The guitarist Johnny “2 Bags” used to be in a really amazing southern California band called the Cadillac Tramps; then he was in the U.S Bombs, so I knew him, too. It’s really cool; we all get along.

SLUG: What’s it like being the new guy for once?

SLUG: For years I’ve heard so many different stories about the night you got your nose broken here in Salt Lake. Could you tell me what really happened?

Matt: I’ll tell you exactly what happened. We were playing the Hatehouse and the gig was on the floor. It’s punk rock and the mics were old, the clip on the stand was metal, now they’re plastic, and I went up to sing the first song, “Rejected.” There was a pit and no stage or anything, and just by my forward body movement and some guy dancing, he hit my microphone just at the exact right time and it just cracked the bridge of my nose and I fell down and hit my head on the amp. I was out of it, and I’m a bleeder, so I was covered in blood. So Tim takes off his shirt and puts it under my nose and was leading me around trying to find a bathroom. Yeah, punk rock’s a dangerous job. So they took me to the hospital and told me it was broken, and now I can’t smell because this was the second time I had broken my nose. The second time’s the charm. Now it’s all flat, but the worst part was, the next day we were opening for Bad Religion and I show up with two black eyes, and my nose was all swollen. But I played that show and what was really bad was I used to have this habit of rubbing my eyes. A broken nose will cure you of that quick, and every time I’d do it, it hurt so bad I’d tear up and it would start bleeding again. That’s the story about me breaking my nose in Salt Lake City.

SLUG: You played mandolin on the second Lars Fredrickson and Bastards record. Why did you learn to play the mandolin, and how did the guest spot come about?

Matt: I love to play all kinds of instruments. I really started taking [the mandolin] seriously last year because I quit smoking. I had smoked for 20 years, and no bullshit, dude, I smoked two packs a day. Finally, after the Warped Tour last year, I just said, fuck it. The problem was that on tours you have nothing to do but sit around, smoke and drink coffee, right? So I took a mandolin because it’s small and I had something to do with my hands, and I just fucked around with it a lot. So then Lars said, come play on the record, and I did it.

SLUG: Are there any instruments other than mandolin and bass that you play?

Matt: I used to play trumpet a lot I started out with trumpet when I was a little kid. I moved on to baritone horn, and I played trombone for a year, and played in jazz band. I keep thinking about getting a horn just because I haven’t had one in a really long time, but I like guitars, and electric bass is really my thing. That’s what I play the most, and I’ve been playing upright bass a lot lately.

SLUG: What’s been going on with your psychobilly band, Devil’s Brigade?

Matt: Not a lot right now. We recorded some songs and they’re coming out here and there, but I’m doing the Social D thing now. But I’ll eventually get something together with that.

SLUG: I heard Geoff ex-bassist for Tiger Army helped you to learn stand-up?

Matt: Yeah, he truly did; he’s really good. I don’t know a lot about the mechanics of the whole thing, so I’d call him up and ask him, so how do you do this? and I watched him a lot last year. He’s was a real generous guy when it came to showing me stuff.

SLUG: I’ve heard the late John Entwhisle (The Who) was a big influence on your bass-playing. What other bass players have influenced you?

Matt: John Doe from X, and I’ve been saying this for years, that someone should do an in-depth study on him. If you listen to that stuff, he’s really buried, but the little notes he plays, he’s just amazing . Horace Panter from The Specials was a big influence; the guy who played on Joe Jackson’s records, I can’t remember his name off the top of my head, big Influence. I could go on forever.

SLUG: Social Distortion has been through several different lineup changes. You’re touring with Tiger Army and they’re out with a new lineup. How has Rancid been able to keep the original lineup together for so long?

Matt: I can’t comment on how other bands work, but I tell you, Rancid has always put friendship above anything else. We’re sort of each other’s best friends. We talk all the time. A lot of crazy shit has happened around us and it’s just brought us closer together.

SLUG: Was Social Distortion a big influence on Rancid?

Matt: Definitely. If you’re from California and in a punk rock band, Social Distortion is an influence on you.

SLUG: I know you didn’t play on the new Social Distortion record, but what’s your favorite new song to play live?

Matt: I like all of them. That record is great. I really like that song, “Highway 101.” The way [Mike Ness] sings that is amazing.

SLUG: Is there any of the old Social Distortion songs you really get excited to play?

Matt then told me he had to run and before I could thank him, he sincerely thanked me for taking the time to do the interview. After it was over, I really felt that it wasn’t so much an interview as it was two punk rock fan boys just talking about the music we love. Matt Freeman talks about John Doe like I talk about Matt Freeman, that’s amazing.

Join Matt, me, and all the other Social Distortion fan boys and girls when Social D plays with Tiger Army and The Explosion Nov. 6 at In the Venue. Pick up the new Matt Freeman-endorsed Social Distortion record, Love Sex and Rock n’ Roll; he didn’t play on it, but he’s a big fan.