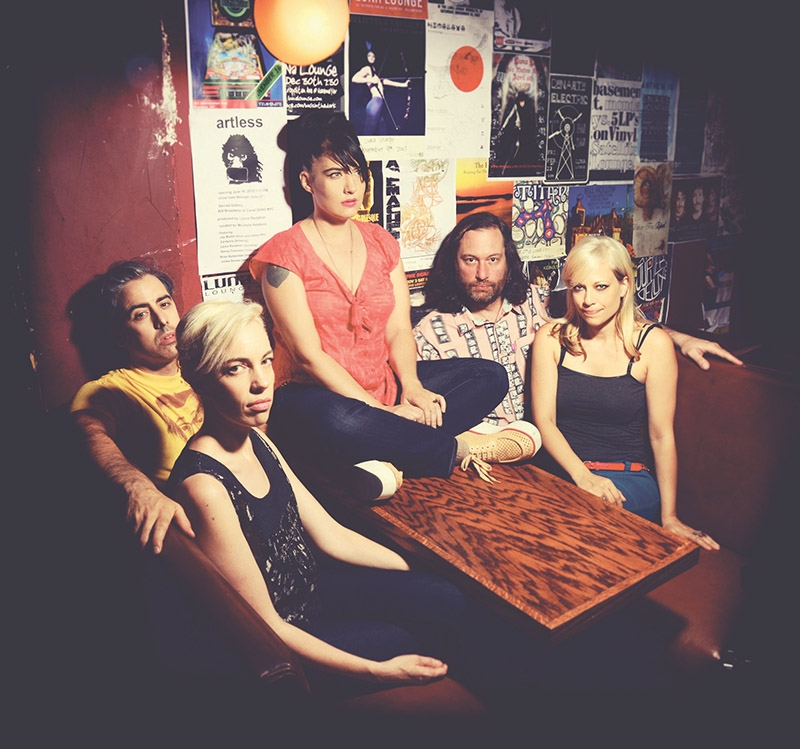 Kathleen Hanna Just Wants To Be In a Band

“I don’t want to be an icon, I just want to be in a band!” says Kathleen Hanna of her latest musical project, The Julie Ruin. It’s been over a decade since Hanna and her band, Bikini Kill, arguably pioneered the riot grrrl feminist punk rock movement of the ‘90s, and over six years since Le Tigre, Hanna’s notable electropunk band, went on an indefinite hiatus in 2007, but in no way has her life slowed down. From teaching at NYU and curating art shows, to this year’s SXSW premiere of The Punk Singer, a documentary following her iconic history and her three-year struggle with debilitating illness, Hanna has grown out of her punk rock 20s—and it’s not so bad.

At first listen, The Julie Ruin’s album, Run Fast, out Sept. 3 via TJR Records, doesn’t stray far from Hanna’s signature ‘90s riot grrrl sound. Hanna’s voice is distinct—sing-song shrieks abound on opener “Oh Come On,” reminiscent of Bikini Kill’s Pussy Whipped—and the keyboard opener on “Ha Ha Ha” brings Le Tigre’s This Island to mind. On repeat, though, Run Fast proves to be a new experience for fans of Hanna’s projects with polished, contemporary garage rock riffs, melodic vocal segments and even some jazz piano—but this isn’t about us anymore.

Admittedly, I pick up the phone with a list of questions that prompt discussions on feminist theories of revolution, littered with her own quotes from a 1998 interview with Punk Planet, a year after Bikini Kill disbanded and Julie Ruin, her solo album, was released. “As Bikini Kill was disintegrating, there was this question of, ‘I’m not the girl in Bikini Kill anymore—who am I?’” she says in our interview, echoing her own words from 1998. Over the past three years, Hanna spent a lot of time in doctor’s offices as they tried to diagnose her ailments, which included everything from sinus infections to difficulty walking, until they finally began successful treatment for Lyme disease. Needless to say, it wasn’t much fun, and Hanna says her biggest fear at the time, career-wise, was whether or not she’d ever record or perform again. “I think the illness was similar [to the Bikini Kill breakup] in that I was like, ‘What do I do now? I’m this sick person. I’m not well Kathleen anymore. So … who is sick Kathleen, and can sick Kathleen make a record?’”

In her Punk Planet interview from ‘98, Hanna describes calling on Julie Ruin to deal with the pain and exude the confidence she was lacking. She says in that interview, “When the world only treats you like a dot on a marketing scheme, you can learn to treat yourself and other people like that … But Julie Ruin is just like, ‘Whatever. You have to do what is fascinating to you.’” Fifteen years later, Julie Ruin has been called upon again, in a sense. “Being extremely ill … I started to feel like my whole life is my illness,’” says Hanna. “[Run Fast] was a way for me to remember who I am away from the illness … In making the record, I got in touch with well Kathleen.”

Hanna picked The Julie Ruin dream team based on two criteria: “One, that I like how they played music, and two, that they were fun people to be around,” she says. The band is made up of Sara Landeau on guitar, fellow instructor at the Willie Mae Rock Camp for Girls; former Bikini Kill bandmate Kathi Wilcox on bass; Carmine Covelli, fill-in drummer for Le Tigre; and Kenny Mellman on keys, a friend and part of drag cabaret duo Kiki and Herb. Once the members were in place, Hanna brought in vocal melodies for the others to work around until it became a full-on collaboration. “That was really the greatest,“ says Hanna. “It just felt like a gift I gave myself. They’re just such great musicians and they’re so fun to work with.” Their chemistry is evident in the music, along with each member’s eclectic backgrounds and influences—this isn’t a band of 20-somethings—but Hanna’s renewed energy and sense of self breathe life into Run Fast, and give over a decade of discographies a much-needed sigh of relief. “As a person who’s always said, ‘This is a feminist band,’ I’ve always been extremely curious as to what it is like to just be in a band and go on tour,” says Hanna. “I’m still a feminist in a band no matter what, but … the expectation to write a feminist anthem every day, I can’t have that on myself. I just have to write about whatever I want.”

The lyrical content of Run Fast proves just that. From personal diatribes on aging, to a track dedicated to cookies, all of us millennial feminists seeking out a radical album to blast in our Subarus while our bisexual boyfriends fist-pump in the back will be sorely disappointed. As Hanna and I speak, I realize that, her refusals to be a feminist icon aside, she’s made a step forward in her life that all of humanity can be inspired by: “I think I want to represent that you don’t have to stay the same. You can change and evolve over time and that’s OK,” says Hanna. “You don’t have to stay 20 forever.” If that’s not radically feminist, I don’t know what is.

Pick up Run Fast by The Julie Ruin now at thejulieruinband.com and cross your fingers they come to a city near you. Watch for The Punk Singer on DVD this fall.