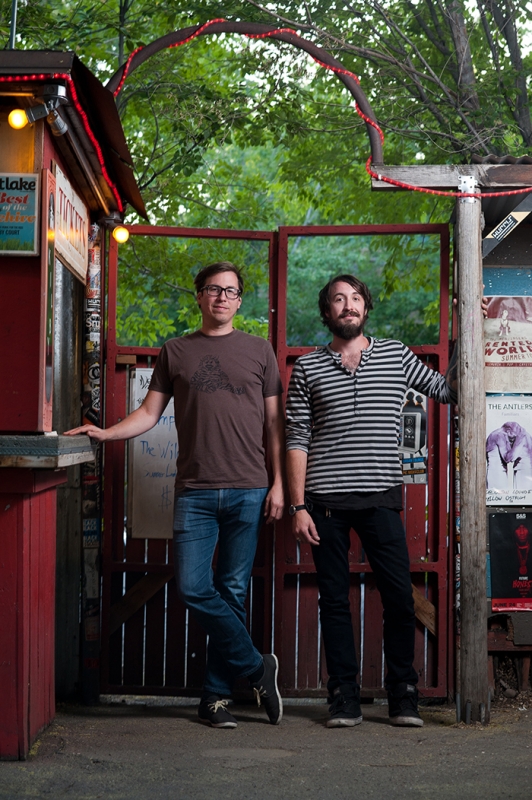 The hidden gem of a venue that is Kilby Court has long been hailed as the heart of Salt Lake music culture. Most of us can remember our first expedition there: the sharpness of Salt Lake’s Granary District, all industrial gray and rusted, the expansive asphalt of 700 South flanked by long-abandoned businesses—unused train tracks ripping up 400 West, ragged plants the only signs of existence. What awaits music devotees at the end of Kilby Ct. is one the longest-running independent all ages venue in the U.S. July 18 marks a celebration of the 15th anniversary of the beloved venue.

The story of Kilby Court begins with South Jordan native Phil Sherburne, a carpenter by trade, who was living and working out of a building on the dead end of Kilby Ct. (741 S. 330 W.). In the late ’90s, Sherburne would occasionally use the space for art shows and private parties. When the tenants across the alley abandoned their garage under mysterious circumstances, Sherburne snatched it, thinking that it would make a perfect base for Borrowed Walls, the nomadic art collective he participated in, as well as a venue for concerts. “Bands and booking agents really wanted an all-ages place,” says Sherburne. In the summer of ’99, Gentry Densley, member of local avant-hardcore band Iceburn and a sonic contributor to the collective, organized the first show in the garage and gave it a name that stuck—Kilby Court.

During his first year running the DIY venue, Sherburne was plagued with visits from cops, who, on several occasions, threatened to shut the place down. “We were in the middle of a way oversold show … The police told me, ‘You’ve got to shut it down’—if people aren’t out of here in five minutes, that I was going to go to jail.” Sherburne was cited with various offenses, but with the help of Salt City CDs owner Rick Zeigler, the venue became licensed and was making a name for itself, both locally and nationally.

Sherburne amended the space to accommodate show-goers and, also with Zeigler’s help, got Kilby Court a working sound system. “I had 2’x6’s, so that’s what the stage became,” Sherburne says. He also added Christmas lights and a fire pit, to give the place an inviting atmosphere. From his workshop, Sherburne and frequent show-goer Leia Bell would screenprint fliers to plaster across Salt Lake. Bell’s distinctive artwork, characterized by colorful, cartoon-like portraiture, adorned promotions for the venue and gained recognition on gigposters.com, becoming synonymous with Kilby Court’s DIY spirit.

“It put a lot of bands off at the beginning,” Sherburne explains. “In those days, there were no trees down there—it was just desolate and really ugly. … They’d be like, ‘What the hell is this?’ That same band, at the end of the night, would be like, ‘This was the best show ever!’”

Bell adds, “Bands really enjoy that feeling. The stage is not raised up—they’re not up above the audience. They’re in the room together, hanging out as a group.”

Kilby Court quickly became a home for “indie” darlings in Salt Lake, drawing then emerging acts such as Death Cab For Cutie, Modest Mouse, Rilo Kiley and Bright Eyes. Because of the venue’s communal atmosphere, Kilby Court became a place where local artists could hang out with celebrated musicians, without the pretense of barricades or bouncers. Local musician Will Sartain attended his first show in 2001 while in high school, and fell in love with Kilby Court’s independent ethos.

“I just wanted to go to as many shows as I could,” Sartain says. “I would go to three shows a week, probably, and just hang out. The first time I met [Sherburne], I told him that I wanted to volunteer at Kilby, ’cause I was there all the time.” By 2003, Sartain was working sound and door, and was also playing there regularly with his band, Redd Tape, who once opened for The Shins. Sartain was such a devoted employee that he started booking shows for the venue alongside Sherburne.

In January of 2007, Sartain started S&S Presents, a Salt Lake–based talent buying company, with his friend Lance Saunders. Sartain had owned his own company since 2005, but his vision for Salt Lake required another like-minded visionary. “I realized right away that I had this little business going,” he says. “I wanted to have another person involved who was equally invested.” Saunders, who caught Sartain’s attention promoting his own band, was the perfect partner. “Everything we did was fluid,” says Saunders. In addition to Sartain’s work at Kilby, the two were booking shows out of another home base, The Urban Lounge.

Meanwhile, Sherburne and Bell had started a family together—when Bell became pregnant with her third child, the couple decided to move off Kilby Ct. and pass the venue torch. Sherburne offered the venue to Sartain, who was already playing a huge role in Kilby’s daily operations: “He’s the only person I would’ve wanted to sell it to,” Sherburne says. In January of 2008, Sartain and Saunders assumed ownership of Kilby Court. A year later, the owner of Urban Lounge, Jared Gill, made a similar proposition to them: “’I’m selling [Urban Lounge]—you guys have 30 days to learn how to run a bar,’” he told Saunders, who bought the venue with Sartain and longtime Urban sound engineer Chris Wright.

In addition to owning two venues, the S&S partnership now books shows all around the city, from Kilby Court’s 200-capacity space to larger venues like The Depot and In The Venue. Balancing acts between 21+ venues like Urban Lounge and the all-ages Kilby Court can sometimes prove frustrating for young kids wanting to see their favorite bands, but S&S’s promotional strategies have procured the income for necessary improvements to Kilby.

Sartain and Saunders have made a few cosmetic improvements to Kilby Court, and other S&S upgrades to the venue—a new sound system, monitors and soundboard—have been geared toward the music. “Everything’s just so DIY and thrown together, but that’s what adds to the charm,” Saunders says. “The paint’s chipping—so what? There’s staples all over one of the walls—it’s OK. It’s a special, little place. It’s more about the music than anything else.” A green room was also built directly behind the stage end of the garage to accommodate touring bands, who previously would have had to scramble between their vehicles and the garage, or Sherburne’s house when he lived on the street.

As a part of the initial change in ownership, the duo also started a label, Kilby Records, a way to pass on the success of S&S to local bands in the process of recording and releasing their albums. The idea never really took off, explains Sartain, and now the label remains as a brand opportunity for involved bands.

For years, the S&S team ran Kilby with volunteers working the door and sound during shows—now they are paid positions, and SLUG Marketing Coordinator Robin Sessions helps the venue with local booking. Sammi Branch, S&S Presents’ Marketing and Administrative Assistant, “does a lot of admin stuff, a lot of marketing stuff, a lot of errands if we need it—she’s just the best,” says Sartain. “The challenge [of managing Kilby] is learning how to let go and allow other people to do the jobs that need to get done.”

Sartain and Saunders also lifted a Sherburne/Bell–era ban on heavier punk and metal shows at Kilby Court, which occasionally used to erupt in violence. “We are OK with any music as long as it is not violent,” Sartain says. More raucous bands like Deafheaven, Perfect Pussy and Touché Amoré have graced the garage of late, as well as wildly diverse indie-label acts such as Angel Olsen, Merchandise and SpaceGhostPurrp.

Such improvements are part of the S&S-era agenda to keep Kilby Court running as smoothly as possible for touring musicians, as well as young, local bands. “The older I get, the less particular I am about who’s playing, [and] the more I get concerned with providing a space for people to make music,” Sartain says—“as long as you can bring a few people, [and] as long as we can pay our staff and make a little bit of money to pay our rent,” he adds. Sartain’s commitment to all-ages shows runs deep. “It helps people see who they are, to go to concerts when they’re young,” he says. “I definitely wouldn’t be who I am today without going to shows as a kid.”

The independent spirit is so engrained in Kilby Court, that it continues to be a magnet for young people dipping their toes into an alternative scene for the first time. For many Salt Lake Valley residents, it’s their first experience with live music. First impressions of Kilby Court are always memorable: “I was in high school, and I remember going down there,” says Saunders. “It was freezing cold. I kept stepping in puddles, and I had no idea where I was going. Once I walked through the doors, I was bombarded by all the Christmas lights and the fire pit. I was amazed that it was that intimate.”

Perhaps the biggest change to Kilby Court has been to the neighborhood that it’s at the heart of—the Granary District. Coffee shops, restaurants and urban renewal projects have sprouted up in recent years, turning the often-overlooked industrial zone into a small but vibrant cultural neighborhood. Recently, screen printers Spilt Ink have moved into Sherburne’s old workshop—“the best symbiotic relationship ever,” says Sartain.

Under the leadership of Sartain and Saunders, Kilby Court’s future is to continue to draw amazing acts from across the planet and to foster Salt Lake’s independent music culture. Be sure to catch Kilby Court’s 15th-anniversary show, featuring local bands SubRosa, L’Anarchiste, Atheist, Westward The Tide and Great Interstate on July 18 at 7 p.m. for a mere $7.