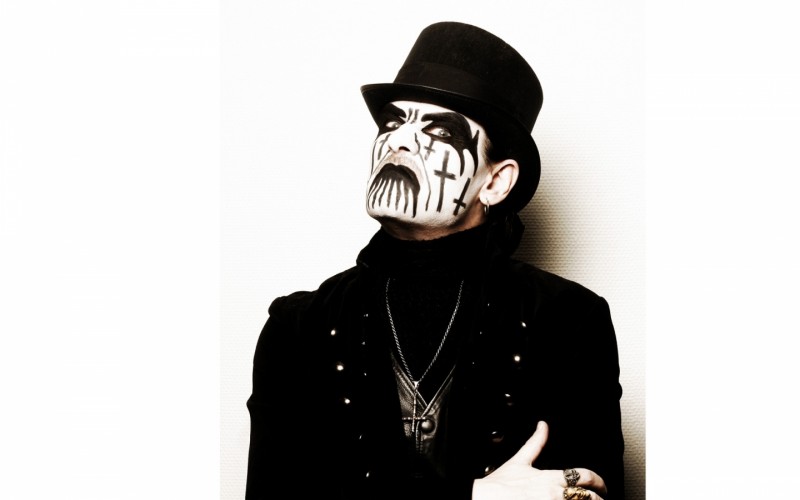 King Diamond: A Visit From The Dead

When I talked to King Diamond, it was impossible to avoid getting swept up in his charisma and enthusiasm for his work. After almost an hour of discussing his incredible life experiences and plans for the future, I was struck by how friendly and down-to-earth he was and by the way that he answered my questions so attentively. King is the kind of guy who has heavy metal in his soul—in a way that goes far beyond the theatrics and posturing that dominate the scene today. When I asked him about the biggest changes he had seen in the heavy metal scene over his long career, his answer was simple but thoughtful. “It hasn’t changed that much,” he says, “but you keep learning more and more all the time.”

The last few years have been difficult for King personally, but he’s taken the opportunity to truly return to his roots and gain a clearer focus on his original artistic vision. Even at 58 years old—only four years after he had triple bypass heart surgery, during which he was essentially dead for several hours—he feels like he’s in the prime of his career. “After [the surgery], we were out doing shows, sounding better than we ever did. My voice sounds better than I have ever had it in my entire career,” he says. “Normally, if you sing falsetto and you reach a certain age, it’s only gonna go downhill. Usually, the band will end up having to de-tune a little to keep up, but that’s not been a problem at all. My voice has only gotten better.”

He says that there’s a good reason for the change. “I’ve quit smoking since I had that procedure—completely,” King says. He also started eating healthier and staying active, and he says he can feel his instrument is more than simply healing. “It has changed a lot for the voice—big time, man. The breathing has changed completely.” Though he’s had to make sacrifices along the way, he says it’s all been worth it. “For me, it was a choice. Either you give some things up, or you can go die,” he says. “I felt I had a lot more to give.”

As King continues his regimen of healthy living, the members of King Diamond are preparing for their first North American tour since ‘04. They spent the summer playing European festivals and were even invited to be the headliners for the “Black Stage” at this year’s Wacken Open Air Festival. “There were 92,000 [fans] there,” he says. “[Wacken] was the biggest [show] we’ve done so far. It was not a spot in the afternoon or something—we were the last band to play on the stage that night, and it went perfect.” Coming from him, that is no small statement. He feels that King Diamond’s live show has reached the point where the band can finally express their ideas fully. “We have a production now that is probably as big as Iron Maiden’s,” he says. “It’s a show you will never forget.”

However, the virtually unmatched staging of King Diamond’s performance isn’t just limited to the annual Wacken Festival, which every metalhead dreams of attending. “That show from Wacken? That’s what you’re going to see in Salt Lake,” he says. “The show is so much bigger now than it ever was, but even when it was reasonably big in the past, at least half the time we’d play, half the stuff was in the truck. It’s not [as] fun, you know?” The band is taking a two-story stage and their own lighting rig so that they can accurately replicate the experience at each stop in their North American tour and not have to leave anything out.

He also mentions that Utah’s show will feature one of our city’s up-and-coming local metal bands. “Salt Lake City is the only show on the tour where there will be a third supporting act,” he says. “A local band of yours, called Visigoth. It’s by special request that they have been added to the bill.”

For now, he’s focusing on preparing for the tour, but King has also purchased new home-studio equipment to help him start writing material for the next King Diamond album. “I will be able to record vocals so much better than I’ve ever done them before. I’ll never have to compromise because of time. I can do it all,” he says. “I can go in and work on 40-voice choirs if I want to sound like Queen, without thinking, ‘Oh, we don’t have time for that.’” He likes the idea of being able to start with the vocals and then write music to fit them. “I could never do that before—that would never be allowed by everyone. Like, ‘Hey, I’m going to spend the next three days fucking around with vocals, OK?’”

Give your soul to King Diamond, Jess and the Ancient Ones and Visigoth on Oct. 26. They’ll be lurking in the dark of The Complex, and you only have to pay $30 to have one hell of a sleepless night. Join the ritual, or you must rest in shame!