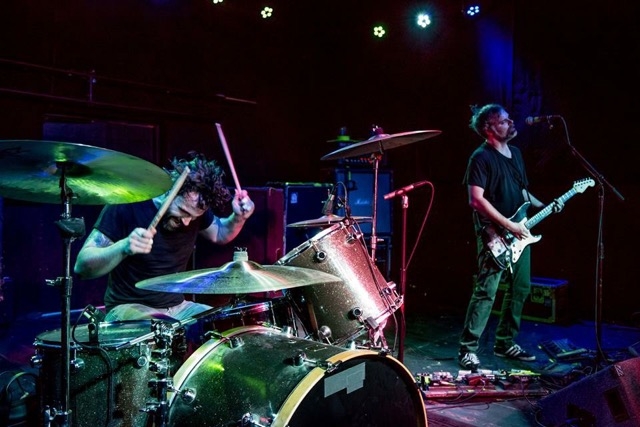 Scott Lucas of Local H thumped the music scene on the head in the mid-’90s with raw, catchy tunes that rocked your world and perhaps made you rethink your selfish, bitch-ass attitude. Now he’s coming to Utah at the Urban Lounge on May 18 to remind listeners that Mondays can still be a hell of a time.
SLUG: So what’s going on right now, where you guys at?
Local H: Well, I’m outside in Chicago and it’s nice.
SLUG: So your new album came out (Hey Killer) and you’re getting ready to go on tour. With so many bands either reinventing themselves to connect with each generation or to stay relevant, what have you guys done over the years to stay connected to the people you originally connected with while bringing in the next generation?
Local H: I really don’t know if we have. I don’t know what the perception of us is or if that would even matter. It’s beyond me.
SLUG: You mentioned in an interview recently that music wasn’t enough as far as connecting with your audience. What did you mean by that?
Local H: Well the music was always enough for our audience and for me. What I meant was that music wasn’t enough for the press and their need for a hook to follow or cover us.
SLUG: Do you stay up on modern music?
Local H: I did for a while. A lot of new indie stuff was really great in the ’00s to 2010—tons of great bands and I listened to a lot of them. Most of the bands now that I hear are just not for me. There’s something too precious and whimsical about it. Most of the stuff I hear is really kinda disappointing, and that’s with indie rock. Now I think what’s happening with metal and psych rock is really exciting.
SLUG: Of all the new bands to come out, you recently choose Lorde’s song “Team” to do a cover of. Any reason behind that?
Local H: Yeah, a friend at a bar told me I should check her out because he knew I was into pop, so I went on YouTube and kinda fell down the rabbit hole. The song “Team” really jumped out at me. I loved the melody but I really connected with the lyrics.
SLUG: Well, you both sit on the darker end of pop so it makes sense. Was it the same when you covered Britney Spears’ song “Toxic?”
Local H: Honestly, we were driving down the road in the van and that song came on the radio. I was like, “This is a really good song. We should cover it,” and that was the end of it. You find songs like this or like with the Lorde song and you connect with it and the next step is making it your own—adjusting your voice and trying different chords so you don’t sound like an idiot. With “Toxic” I thought, “These are really good lyrics.”
SLUG: So, speaking of connecting with your audience, how did you guys come up with the case of beer, show up at your house with a record ploy?
Local H: Kinda like what we were talking about earlier—just trying to find a hook to get people to talk about us and share our new record. I was like, “Well, maybe we should have a listening party,” and then I was like, “What if that listening party went on tour and just went to people’s houses?” It was like that scene in Almost Famous, except it wasn’t really like that. I mean, nobody jumped off a roof.
SLUG: You mentioned once that you’ve stayed real or remained an actual person throughout your career, so for those of us who will always be normal, what have you witnessed that causes the disconnect from the everyday into the surreal world of celebrity and how did you avoid it?
Local H: You have to put your foot down or you’ll get it taken away from you. It says a lot about a person in how they act with the fame and what they do when it’s gone. I think the main thing is, you gotta not hang around people who kiss your ass. I think that’s probably the biggest disconnect for people. No one is telling these people the truth.
SLUG: So speaking of fame and celebrities, what movies are you into now?
Local H: Well after I hang up with you I’m gonna see Tales of Hoffman at the Music Box here in Chicago so I’m excited about that. Never seen it before.
SLUG: So you’ve DJ’d and performed as a singer, is there any difference in gauging the audience?
Local H: Well, with singing, there’s a setlist and with DJ’ing you just gotta look around the room and figure out what the dirtbags wanna listen to.
SLUG: The songs you create have a bit of emotional grip to them. How much of that is you versus the story you’re trying to tell?
Local H: There’s really no difference. I don’t think I can separate the two.
SLUG: Watching your videos and public appearances, I noticed over the years this dry, almost cruel, sense of humor with people and the press—where did that come from?
Local H: I’m not a politician and I don’t like when people act like politicians, so that’s the way I respond when people get on my nerves. I have a dry sense of humor. I like stuff that’s not for everybody. I mean we’re not for everybody. Some people get the joke and some people really aren’t prepared.
SLUG: Well, we here at SLUG get the joke and appreciate your music. Thanks so much for taking the time to chat with us and good luck on the tour. See you soon!
Local H: Thanks, it was good talking. I’ll see ya later.
Photos: