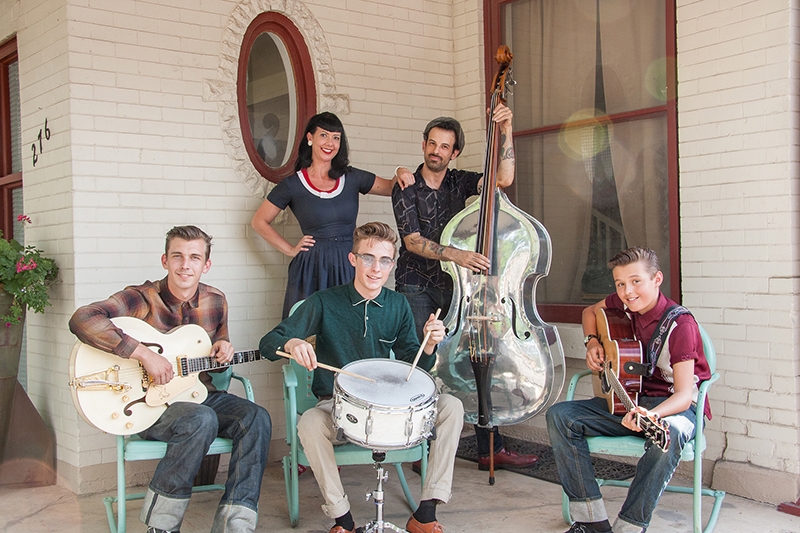 The Maxwells (L-R): Wyatt, Angela, Cole, Shane Kiel and Duke) continue in their passion for music as Mad Max & the Wild Ones.
Photo: John Barkiple

Mad Max & The Wild Ones: the New Normal

The standard order of things is that, when we find rock n’ roll, we use it to piss off our parents—not to start a family rockabilly band with Dad playing upright bass and Little Brother taking on lead vocals at the age of 4. But “standard” and “normal” are not words that anyone would use to describe the Maxwell family.

When Wyatt Maxwell turned 8, he asked for a guitar. His brother, Cole, followed soon after with drums, and the music began to pour right out of them. Looking to get in on the act, the youngest brother, 4-year-old Duke, took over lead vocals, gaining the position by learning a ton of Johnny Cash lyrics. Wanting to involve their dad, Donnie Maxwell, the boys gave him an upright bass for Christmas and began helping him learn to play it. “Dad was just cooler than us,” says Wyatt. “I went through a punk rock phase, and I’d bring home a Sex Pistols CD, thinking I was all rebellious, and he’d bust out some G.B.H. and Exploited CDs for me to check out, and I was like, ‘Who are you?’”
Under the watchful eye of Angela Maxwell, their mother, the boys began playing live. They started with a car show put on by family friend and hot rod legend Bo Huff, who was impressed by what he heard after visiting the family. Angela says, “They didn’t even have the name for the band yet, and Duke was only 5. We weren’t sure how he’d react to the crowd, but he just loved it, and after it was over, he told me that the more people there are, the better he plays.” The band began picking up gigs as Mad Max & the Wild Ones from then on.
Each one of the Maxwell boys has uncanny natural musical ability. Wyatt’s playing is so impressive, he became the youngest guitar player to ever be sponsored by Gretsch Guitars, who approached him after seeing a show. Cole seemed to be destined to sit behind a drum kit: “Cole was always thumping out rhythm on something,” says Angela. “He’s become an excellent songwriter.” Now 13 years old, Duke has picked up guitar and, recently, the harmonica. With help from local blues harp luminary Brad Wheeler, Duke has become quite adept with the instrument, just as he has always been with learning lyrics.
As Mad Max & the Wild Ones played more shows, the legend of this family band with rockin’ young kids spread throughout the rockabilly and roots music communities, making touring the U.S. possible, and even allowing them to travel to New Zealand to play shows. “The whole thing has been kind of an adventure that none of us expected,” says Angela. “We played that first show at Bo Huff’s, and people just started to contact us about playing different places all over the country.”
While the band gained popularity, Wyatt’s guitar playing grew in demand as well. He has toured with Wayne Hancock, and is often hired by rockabilly piano man Lance Lipinsky to record and tour. It was his relationship with Lipinsky that landed the young guitar slinger on The Late Show with David Letterman, backing up top Elvis tribute artists for an entire week’s run of shows this last February. “It was nuts,” says Wyatt, “hanging out with Paul Shaffer and Bones Malone from the Blues Brothers … I got to go down in the basement and explore all the tunnels, and I got to know the guy that does the sound effects who’s been there for, like, 35 years, and he told all sorts of crazy stories.”
Unfortunately, about a month after Wyatt was hitting the national television stage, on March 19, 2013, Donnie passed away due to complications from diabetes. “From the outside, it may have seemed weird for some people,” says Wyatt, “seeing us kids in a band with their dad, but it was always more cool than anything. I had a friend whose house reeked of macaroni and cheese all the time, and he thought that was normal. Playing this music and having fun at shows became normal for us.”
Even though family and band have suffered a massive blow, they have decided to keep the music flowing. “I know he would want them to keep playing,” says Angela. “It was Donnie’s favorite thing to spend time with his sons playing music, and that was what he passed down to them.” Shane Kiel, a longtime friend of the family, has filled the role of bass player, even spending time with Wyatt while they both were on tour with Hancock. “Shane’s a great fit,” says Angela. “We’ve known him for such a long time—it’s still like having a family band. He’s like a little brother to me, so to the boys, he’s like Uncle Shane. He might as well change his last name to Maxwell.”
The Maxwell family has been through the worst of it this year, but they are determined to come out on the other side maintaining the passion and energy Donnie had for making music with his family. Look for some vinyl 45s to be released soon, and a full-length record out sometime next year. Catch a live performance from Mad Max & the Wild Ones at the Craft Lake City DIY Festival on Friday, Aug. 9 at 8:30 p.m.
Photos: