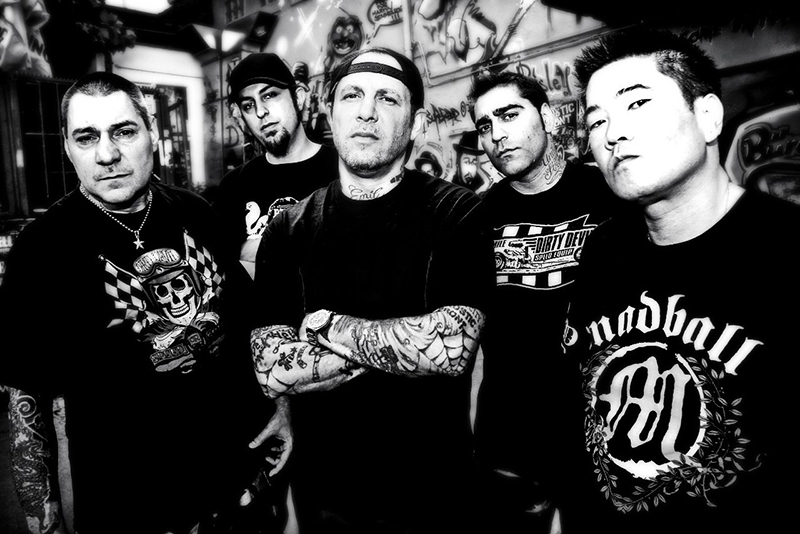 Making History From the Shadows: An Interview with Agnostic Front’s Roger Miret

The first time I heard anything hardcore was the first time I saw Agnostic Front live. Everything about them was so brutal. I couldn’t believe my ears—the way Vinny Stigma punished his guitar and the way Rodger Miret attacked the microphone with such magnetism; it was the most ferocious thing I’d ever seen.

Talking to Rodger was just like I expected it to be, full of energy and honesty. With a new label and new blood in the band, he and Agnostic Front hope to push the envelope of the genre they helped create by combining pieces of the band’s history and plunging forward with their new record, Another Voice.

“This isn’t anything Agnostic Front hasn’t done before,” says Rodger. “I think [Another Voice] is a perfect blend of One Voice meets Something’s Gotta Give. It’s a fantastic record, and whether you like it or not, when you put it on from beginning to end, you have to hear the truth and honesty behind it. You can just feel the honesty. That’s real New York hardcore. You can’t deny that.”

If anyone could get the credit for creating the New York hardcore sound, it would be Agnostic Front. It’s a style that has influenced countless hardcore and punk kids alike. Yet in the pages of history, Agnostic Front is unduly absent.

“I’ve been saying that for years,” says Rodger. “You pick up these books on hardcore and punk and they go from Black Flag to Rancid, which are two amazing bands, but what the hell happened to everything else? What about Agnostic Front? Think about this: All those bands that everybody raves about—they gave up on you. They quit; they grew up out of it, or whatever. We never gave up on nobody. This has been our life; this is our commitment, our honesty and our truth. This music made a change in my life and the fact that we are not mentioned is ridiculous. They’re trying to void us from history, but records like Another Voice and all the others will not leave us out.”

One reason Agnostic Front may be unmentioned is partly because of the brutal truth they have taken on in their songs. Simply stating the truth of what he saw around him has brought Rodger and Agnostic Front accusations of racism, among other things.

“One song in particular, ‘Public Assistance,’ brought us a lot of controversy,” Rodger explains. “I believe everyone should have public assistance that needs it; I have had public assistance myself, but where the song came from was when Vinny and me both tried to get public assistance to go to the doctor. I was given care because I was Hispanic and he was turned down just because he was white. I just thought that was wrong. So we wrote this song about how screwed up that was, and the people that didn’t get it called us racists for it.”

“Peace,” the new video single, is a standout song on this soon-to-be hardcore classic. In true Agnostic Front fashion, the song hits hard and discusses heavy topics like war and terrorism. When Roger screams, “Peace is not an option,” one has to wonder what is behind such a song.

“Basically,” he said,” the song calls for an end to terrorism worldwide. I was in Dublin and I saw someone had spray-painted on a wall, ‘Our freedom fighters are their terrorists, their heroes are our nemeses,’ and that just blew me away, so I wrote it down. I know war can sometimes be avoided, but with the tragedies here in New York, I just think we’ve got to the point with terrorism that peace is no longer an option.”

Agnostic Front has lived it. There’s nothing cushy about the music they play or the life they lead. Over the years, they’ve had to make sacrifices to keep things going.

“That’s something,” says Rodger, “that really worries me, because as we’re talking right now, I have no health insurance, I’ve got no retirement, and that’s a huge concern for me. I’ve got a daughter who’ll be going to college soon. I’ve got to be able to take care of things like that. If anything happens to me, I don’t know what would happen.”

Carrying all of this, Agnostic Front roll forward with their new record, Another Voice. The New York hardcore stalwarts recruited friend and fan Jamie Jasta (Hatebreed, Headbanger’s Ball) to produce their next record.

“Jamie should have gotten sixth band-member credit on the record,” says Rodger. “He really helped us out. This whole Another Voice record was really his idea. We were on tour with Hatebreed and one day we were drinking Jäger and listening to One Voice. Well, in our Jäger-fueled aggression, Jamie started shouting, ‘Let’s do Another Voice;’ that’s how all this really came about. So he said he’d take us into the studio and I didn’t believe him. I thought, ‘There’s no way,’ but a few weeks later, he called us to come up and start work on the record.”

They have never let up one bit. Agnostic Front doesn’t need a place in any book. Their place is in the hearts and minds of the people that know their importance. Another Voice hits the streets Jan. 25—do yourself a favor and listen.