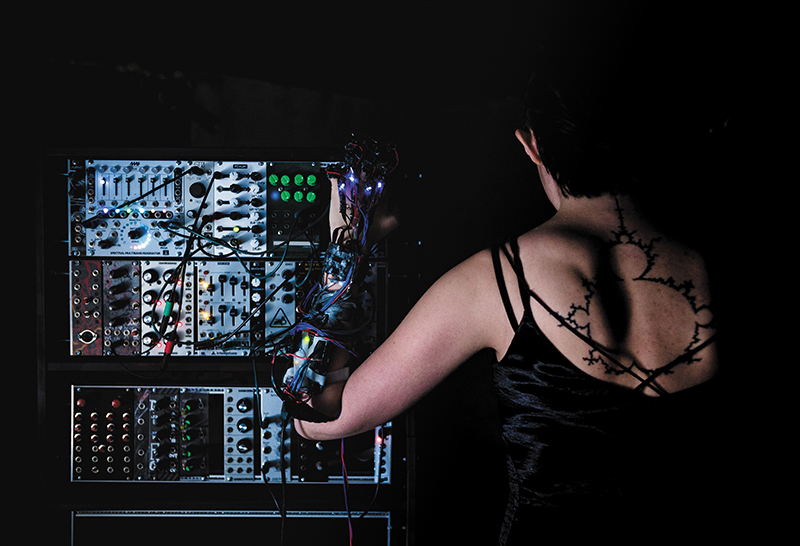 Mechanical Ghost: A Conversation with 80KV

80KV is the moniker of local musician Autumn Rogers and centers around the use of motion-controlled gloves that Rogers uses as instruments. After a long, formal musical background, including piano, the harp, the drums and a foray into punk music, Rogers is excited to explore territory more directly relevant to her interests. Whether it’s through live performances or visual album projects, 80KV is Rogers’ plan to combine technology and music in a haunting, spectral manner.

For Rogers, 80KV is a means of creating music that responds to the problems she sees with contemporary electronic music. “It was very frustrating for me to work on electronic music because it was very counter-intuitive to create,” says Rogers. “It’s abstract in the sense that it’s very disconnected from the physical process of making music. All of the creation of the sound is happening on the computer or in this synthesizer box, and it doesn’t really feel the same as playing the guitar.” Playing physical instruments is crucial to Rogers’ musical background, and guitar is her primary tool—she’s also a member of the live bands for local groups IMPXVIII and Selling the Ashes. The artist’s website showcases her using the gloves not as a stand-alone instrument but as an extension of the physical guitar. The music-making is anything but abstract and removed: rather, it reinforces how tangible making music can be in an overtly digital world.

Outside of simply making electronic music physical, 80KV is a way for Rogers to explore some of her other interests. The musician graduated from the U of U with her degree in computer science and is a self-proclaimed “probability nerd.” Her gloves show not only these technological interests but also an obsession in the inherently random and imperfect nature of computers. “I use a modular synthesizer, and with those, if you want to preserve something, you have to record it,” she says. “You will never get the exact same settings again, and I think that’s beautiful.” The constantly shifting nature of composition recalls aleatoric classical music, and Rogers sees non-permanence as her main mode. By embracing the unknown and uncontrollable, Rogers subverts her role as the sole creator and allows her instruments and tools to take part in the music-making.

This follows suit with how Rogers feels the gloves should be used. In many of her videos, Rogers uses her gloves to make grating noise music. Her guitar improvisations swell under rushes of static, but she claims that this is a preference rather than a necessity. “I can use the gloves to do basically anything I want with my synthesizer,” she says. “It was very noisy just because that’s something that I like, but I can use them to control a melody or to control reverb as opposed to distortion. It’s just a matter of what patch I create on my launch board.” Similar to her preference for improvisation over thorough composition, Rogers sees her use of the gloves as a small example of their full potential. These two attitudes combine to create a mystique around 80KV, where the end musical product becomes an almost completely uncertain idea.

Industrial music is key to Rogers’ project, and our conversation showed this. Outside of listing the group Author and Punisher’s live show as one of the main influences for her project, Rogers talks about industrial music at large as a driving force behind 80KV. “There’s a lot of really exciting stuff happening in that genre right now,” she says. “Modular synthesizers are really making a comeback there, and I want to build on those trends.” The music of this project is as obsessed with the idea of technology and machinery as is the basic concept of 80KV. Industrial music has always lauded how cold and battering music can be, and Rogers finds herself fitting nicely into this community.

On top of being simply musical, 80KV looks toward other mediums of art for expression. Rogers’ videos show her wearing a robot-style mask and performing her music in dark, black-and-white videos. Topics include the 2015 science fiction film Mad Max: Fury Road along with David Lynch and his musical collaborator Angelo Badalamenti. The idea of the surreal is highly prevalent through both of these visual works, and this shows up in 80KV. There’s something about the slow and eerie movements of Rogers that recall the subtle darkness of Twin Peaks, and the costume design in these videos is prime science fiction makeup. This makes the project a fully immersive experience rather than a simply aural one.

80KV barely went live in the last few months of 2016, and 2017 looks like it will be the year where everything comes into focus. On top of plans to put on a handful of soon-to-be-announced live shows, Rogers has a multi-media album in the works. “It’s kind of a weird concept album that I want to do, so I want to record that and almost do kind of a video album to go along with it,” she says, “recordings of me performing the tracks along with other music video stuff.” 80KV is a heavily involved and complicated way to look at music, and Rogers is approaching her craft with more ambition than many could hope to have.