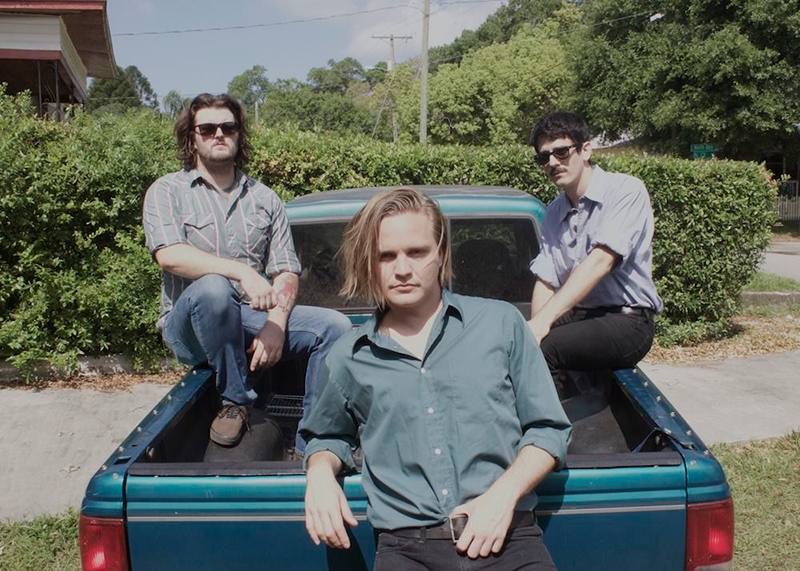 Merchandise will be playing the Urban Lounge on May 26.
Tampa, Florida’s Merchandise have spent the majority of their time together agitating all entrenched notions of punk, pop, noise and rock n’ roll. With albums Children of Desire and Totale Nite, the group developed a knack for writing sonically diverse, engrossing songs—songs on which Dave Vassalotti’s and Carson Cox’s songwriting dazzles like a Morrissey-fronted Jesus and Mary Chain covering The Replacements. On their first full-length with famed indie label 4AD, the group traded in their rough edges for their most polished effort yet.
“We learned a lot,” says Vassalotti, from making After the End, their third-full length, which was released last August. “It was definitely a process of making a record unlike any of the ones we made before. We spent so much time on it, building it every day at home, with months of recording and mixing—it was pretty overwhelming.”
After the End was recorded and produced over a period of six months in the Tampa house that, until recently, was shared by all but one member of the band. “We recorded it all in a glorified closet with a mold problem and carpeted floors—possibly the worst-sounding room to make a record in,” says Vassalotti. With total creative freedom and monetary support from 4AD, the band handled the digs just fine. “Carson, over the years, has recorded and produced so many records that he’s finally mastered how to make the most out of crappy situations,” he says.
The duo’s understanding of each other’s musicianship shines on After the End, their most pop-oriented offering yet as a group. It’s a record that, in some regards, hearkens back to the ’80s, when men in bands were less afraid to take risks in baring their emotions and insecurities. An instrumental track, “Corridor”—with airy acoustic guitars, strings and chimes—breezily opens the album, gently preparing listeners for the maximized pop that follows. Earlier tracks such as “Time” and “Become What You Are” showcase a penchant for lo-fi pop anthems with sickeningly bittersweet motifs, but After the End’s “Enemy,” “Telephone” and “Little Killer” indulge the band’s hook-verse-chorus-repeat mentality. But, missing from the record is the usual foundation of spontaneous noise and lengthy shoegaze jams.
In hindsight, Vassalotti thinks it might have ended up becoming too polished. “We went a little too far in one direction,” he says. “We ended up missing out on some of the organics and mistakes that made some of our past records a little more fun to listen to. This record is such a sad, sad beast to get through all the way. It’s emotionally draining, which I like, but I think, for the next record, we need to have a little more levity and variety going into it.”
Contributing to the veneer was British music producer Gareth Jones (John Foxx’s Metamatic, Depeche Mode’s Berlin trilogy, Einstürzende Neubauten, Erasure), who mixed the record in London. “He put his touch on it and that also made it sound huge,” says Vassalotti. “I think he’s pretty responsible for making that big huge leap in depth and quality and fidelity for us.” Vassalotti describes the process of sending the group’s music to someone outside of the band for the first time as nerve-wracking. “It was the first time we had ever put somebody else on the mix of one of our records,” he says. “If we were going to give it to anybody, it would be him—we felt like it was in good hands.”
“Overall, I think with time, this record will age better,” Vassalotti says. Reflecting on the whole process, he says, “Now that some time has passed, we’ve sort of learned how the game works a little better and for whatever next record we do, we’re a lot more prepared for it.” Vassalotti and Cox are currently demoing material for a follow-up album, which they plan to record in a professional studio.
Most recently, Merchandise toured the U.S. with indie-punk group Title Fight and hardcore thrashers Power Trip, where each show was all-ages with a crowd that primarily weren’t there to see them. “It was definitely a trip,” Vassalotti says. “It was cool to sort of not have any pressure to be this big thing. We had the ability to experiment a little bit more and try and broaden these kids’ minds.”
Merchandise will play Urban Lounge on May 26 with shoegazers Nothing and Cloakroom.
Photos: