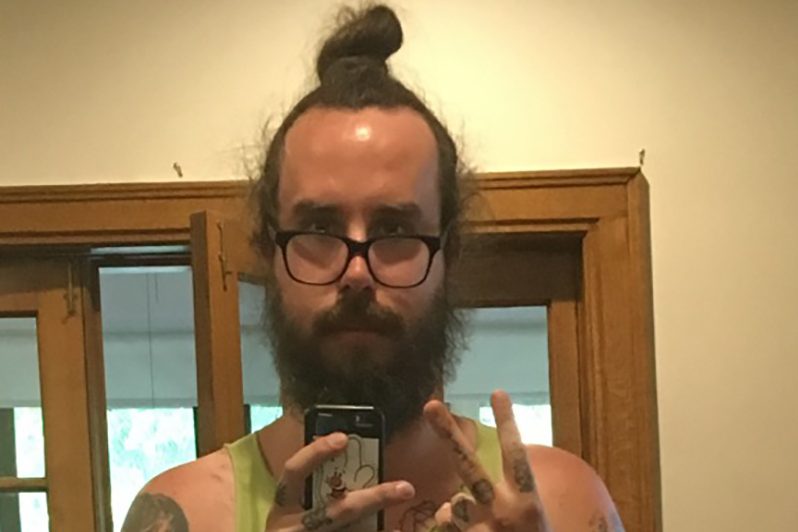 Mukqs the Word: An Interview with Maxwell Allison

As one third of the psychedelic drone group Good Willsmith, a co-founder and manager of Hausu Mountain records and an unfathomably prolific solo artist, Maxwell Allison has his hands in multiple corners of the bizzaro 21st-century underground. While his label (co-owned with Doug Kaplan) is responsible for some of this decade’s best experimental music (Fire-Toolz, Eartheater, Moth Cock), his own releases for a variety of independent labels create an ever-expanding world unto themselves. Released (mostly) under the pseudonym Mukqs, Allison’s warped blend of techno, ambient, tape collage, video game music and hosts of other sonic influences can read as untethered madness. Within their own self-defining structures, however, these albums offer a vision into an electronic style that’s equal parts past, present and future.

Growing up, Allison dabbled in heavy metal bands and cites groups like Mr. Bungle and Naked City as critical influences. “They were willfully combining stupid ideas and mashing them together,” he says. “That’s an early template for me.” While unintelligent is no way to describe these artists’ or Allison’s work, there is a sort of logic-through-illogic that permeates the Mukqs releases. Especially on his latest, the lengthy Any% for Doom Trip, the disorienting mesh of styles and sounds revels in chaos as opposed to coercing it into order. Dreamy, J-pop-inspired synth pieces segue into jackhammering vocal samples and drums beats that hurl against each other like bumper cars. Of his long-term relationship with such a myriad of styles, Allison says “You have to start building up your toolbox. Even though I played in metal bands, I was always listening to other stuff—hip-hop, pop, experimental music.”

“They were willfully combining stupid ideas and mashing them together. That’s an early template for me.”

While part of the definitive Mukqs sound comes from these stylistic acrobatics, another is indebted to his strange and minimal setup. His rig primarily revolves around a Korg Electribe and a set of tape decks, a unique and somewhat antiquated way of making electronic music. Both liberated and restricted by the gear’s capabilities, he describes his sound manipulation practice in tactile, almost destructive terms: “rounds of mulching,” “thinly diced.” While he can (and sometimes does) dive in deep and build intricate, cohesive pieces, a greater part of Allison’s music—especially in a live setting—relies on real-time, gut decisions that help draw connections between the disparate samples and rhythms he features: “In the moment of the improvisation, you don’t care if it’s perfect,” he says. “[The sound] might only appear briefly, but if it’s crammed together with a bunch of other things that are similar in the big picture of the mosaic, you can’t tell where anything came from.”

While Allison’s solo work is spell-binding in this canvas-like approach to sound design, it’s in his collaborations that his true talents as a shapeshifter shine. A first listen through Allison’s recent album for Orange Milk, the jittering and torrential SD Biomix, could suggest that anyone trying to slide their way into his world would be hopelessly lost: The jagged, neurotic beats and unpredictable structures sound full enough as they are. It’s Allison’s self-awareness of this fact that allows his collaborative spirit to flourish. “I definitely cede to their wishes,” he says. “Given the free-for-all chaos of the Mukqs stuff, there’s no reason to bring that and just throw a guitar over it or something.” Instead of pushing for bigger and bigger maximums, Allison steps back and lets the spaces in his sound mold new collaborative relationships.

“[Sharkula] thrives in this one-take zone, where there’s nothing you could do that could be wrong.”

This careful approach manifests itself in areas as wide-ranging as his work with Good Willsmith, a Hausu release with Chicago underground hip-hop fixture Sharkula and a head-scratching improv record for Astral Spirits with Ryler Walker under the name Crazy Bread. “I’m thinking about what might complement what they’re doing, and thinking about why it would be worth it to work with someone else. Am I bringing something unique to their world? Am I just chilling with them really well? I’m just catering directly to what they know.” For instance, on Crazy Bread’s Vocoder Divorce, Walker’s classic rock influences and Bailey–inspired guitar improvs are met with motorik drum grooves and hilarious tape collages of hard rock riffs. It’s silly and jarring, but the duo’s confidence in their oddities sells the atypical improv music.

The Sharkula collaboration, entitled Prune City, is a particularly successful pairing. Allison’s approach to hip-hop production is far from orthodox, favoring dreamy, warbling synthesizer chunks and glitching beats. Thankfully, Sharkula is just as much of a committed outsider as Allison, and the resultant collaboration works perfectly. “We weren’t interested in the structure where we sit down and write a track—that wasn’t the angle,” says Allison. “[Sharkula] thrives in this one-take zone, where there’s nothing you could do that could be wrong. He has no inhibition at all when it comes to what constitutes a verse.” The MC’s rapping style can be jarring at first, but his slow, casual delivery and free-associative rhyme schemes become a beautiful puzzle to sift through over Allison’s low-key instrumentals.

“In the moment of the improvisation, you don’t care if it’s perfect.”

The world of Mukqs is vast and confounding, such that an unfiltered entrance could result in a bit of vertigo. Jumping into Any% would give the impression of an almost manic artist flitting around a horde of analog gear. 2017’s Dame Ningen on Umor Rex presents the opposite: almost calm, leaning toward meditative beauty. No matter where you decide to start first, the majority of Allison’s music—including his 2019 releases, Any%, SD Biomix, Mem Aleph and Prune City—can be found in various corners of Bandcamp, as can a wealth of Hausu releases. Once you’re in, you’re in, and there’s likely a stream of albums coming down the pipeline to satisfy you after consuming Allison’s already massive heap of music.