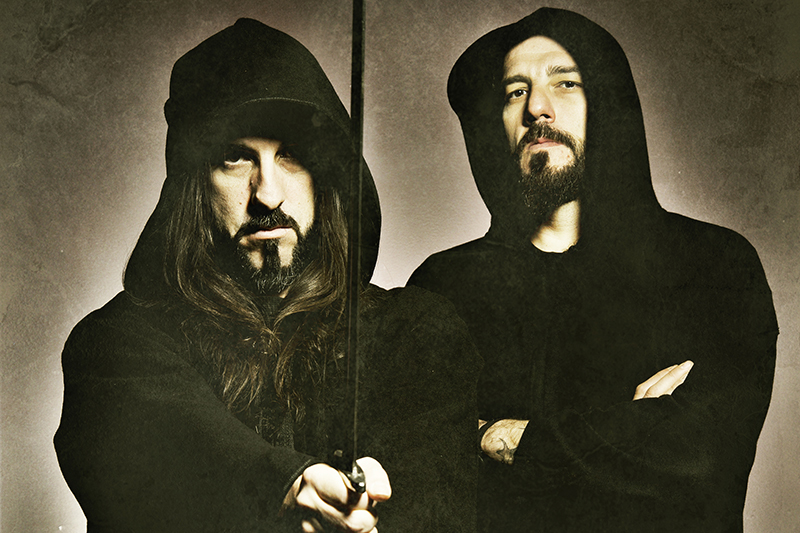 With 30 years in existence as Rotting Christ, this band’s name has coursed the lips of metalheads all over the world—an accomplishment that any metal band would love to boast. Sakis Tolis and drummer/brother Themis Tolis formed the band in Athens, Greece, in 1985 under the name Black Church but changed their name to Rotting Christ in 1987. That foundation and progress over the years—never quite repeating themselves on any release—is what keep Rotting Christ part of extreme metal royalty. Rotting Christ play Salt Lake City at The Complex for the first time ever as one of the supporting bands for the Black Metal Warfare tour with the true Mayhem and Watain on Nov. 17.

The band recently released a live album, Lucifer Over Athens, about which SLUG spoke with Sakis. Lucifer over Athens is a full-on smash of what the band has done throughout their career, which can be split into three eras: Early on is black metal; later is a more gothic/dark metal sound; and finally, a more extreme but polished, epic and often symphonic sound. “We spent many hours doing the mixing so you can have a quality result,” says Sakis of his mission for the live record. “We managed, in the end, [to record] 31 Rotting Christ songs on a double CD and a triple LP. Welcome on board and enjoy our dark trip into the years.”

Rotting Christ’s name, for those unfamiliar with the band, might sound like the band is just another satanic or Christ-hating extreme metal band—but in a world that is very rotten, Rotting Christ can mean a lot of things. There is a running theme throughout Rotting Christ’s career that Sakis puts into perspective as he states a sort of motto for the band’s philosophy: “Keep on spreading the message of ‘Non serviam’ in all the corners of this planet with music that can touch your soul,” he says. Non serviam is Latin for “I will not serve”—which, to me, means that not serving any master or belief affords complete freedom.

The band has focused on quite a few things over the years, such as incorporating music from cultures around the world. For example, their last album, Kata Ton Daimona Eaytoy, includes Slavic, Zoroastrian, Mayan and other mythoi, whereas earlier work consisted of anti-religious ideas or focused inward during their middle era. “We are more or less the same,” says Sakis, even though the band has changed lyrical and musical themes over the years. “We are walking more or less in the same paths,” he says.

With Rotting Christ’s recent exploration of other cultures’ mythoi, spirituality and philosophies, one might wonder if that exploration of other worldviews and cultures have influenced Sakis’ beliefs, whose anti-religiosity is the very core of what Rotting Christ represents. But Sakis remains stoic in his belief to serve no one. “The eternal fight with my own demons didn’t change my beliefs,” says Sakis. “I am the person that is searching in-depth throughout many cultures—and despite the fact that I do not agree with them, I respect them. [They] maybe influence me in a way but not my main beliefs.”

Greece has produced many different metal bands—from the anti-humanity-themed Dodsferd to the gothic symphonic prowess of Septic Flesh, or black metal like Necromantia, Varathron—and even a side project from Sakis: Thou Art Lord. Greece is home to so many fantastic metal bands, but Rotting Christ can be considered one of the country’s godfathers of extreme metal. Sakis treats that sentiment of being the elder metal fathers seriously, taking the band’s long history and influence into consideration: “It pushes us to think about any step we are making—every step has a weight,” says Sakis. The band may still progress musically and thematically, but he maintains that the band still retains the old-school metal philosophy.

Sometime within the next year, the world will be treated to a new Rotting Christ record. With a fascinating history, the expectations are always huge for an established band. “I worked almost two years, and I want to believe that the quality is really good,” Sakis says. “It’s our darkest, and we hope to not disappoint.”

Rotting Christ hail from a country that’s currently experiencing huge financial turmoil, and Sakis says Greece’s economic crisis has affected the band but that he has no intention of quitting. Rotting Christ already have a legacy that can be measured by their success and musical artistry, among other ways. It’s exciting that a band with that legacy is still moving forward. Salt Lake City gets to finally witness that legacy when Rotting Christ play The Complex on Nov. 17 with Watain and Mayhem.