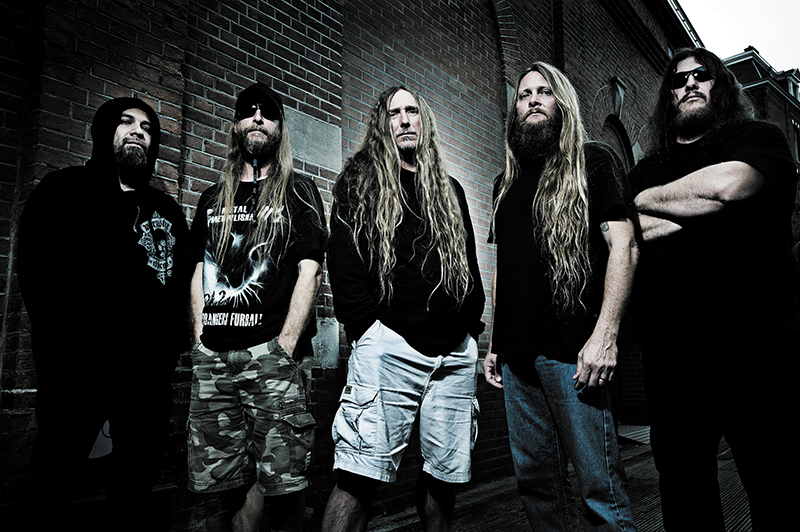 Excitement seems like a small word to use about the fact that Florida’s old-school death metal titans Obituary are coming to Salt Lake City on March 1. The closest that I thought I would ever come to seeing Obituary live was in the spring of 2002 when I saw a band called Catastrophic, featuring Obituary guitarist Trevor Peres, play a show alongside Immortal and Manowar up in Seattle. At the time, Obituary were on hiatus with no hints of a regroup. Obituary officially regrouped in 2003, but have not played SLC since. Classics are a must to headbang to live, like “Slowly We Rot,” but so are songs from Obituary’s latest, their 2015 record, Inked in Blood, such as the riff-heavy, fast- to slow-tempo “Visions in my Head.” Perhaps the reason why Obituary are such a seminal death metal band is that in making music, they “let happen whatever will happen,” says Obituary drummer Donald Tardy. “I believe that is the best way we create unique songs and keep the Obituary style.”

My nostalgia for Obituary comes from my early teen years, sorting through the CD rack at The Heavy Metal Shop, where I found Obituary’s album World Demise. The cover art and band logo looked cool, so I snagged it. Not long after, I quickly purchased the band’s first three albums. I got hooked because they didn’t sound like the typical American death metal band. The snarly vocals, mid- to down-tempo-style riffing, a gritty, down-tuned guitar tone and organic yet complex drum tones of Obituary’s brand of U.S. death metal is what I love about them.

Inked in Blood, maintains the classic Obituary mid-tempo, guitar tones and crunchy, crushing riffs. The vocals are also more clear and understandable with the new material. In the past, vocalist John Tardy (Donald’s brother) pretty much snarled everything, and he admitted growling random noises live in the past. Inked In Blood sticks to Obituary’s roots—progressing the songwriting forward with more guitar complexity, subtle bass-guitar sounds and guitar soloing.

This album arose from a successful crowd-funding campaign last year, which has enjoyed critical and fan praise. The songwriting took a few years, but the band gained motivation to record the songs because fans who donated to make the album were anxiously awaiting the final product. “We were blown away by the success we had with the Kickstarter campaign,” says Don. “It just goes to show how passionate our fans are and how much they want to be a part of it more than just buying an album once it is released.” The album is the third that Obituary recorded in their own studio. “It was an amazing project, and we are very proud to say we did it without any outside help—[it was] all recorded live with microphones in the studio, no triggers, no sound replacement, no post-editing cleanups,” says Don. “I don’t think the fans care where you record it or mix it—as long as it sounds like the band they want—and I think we stayed true with this production. It’s not rocket science; it’s just metal.”

In the early ’90s, Obituary focused on their music and avoided being similar to others during the U.S. death metal explosion of that time. Over the years, they stuck to their roots and let the music “flow without thinking too hard,” says Don. “We’ll leave blastbeats for the other bands. We are happy with that mid-tempo, groovy Obituary style that our fans have grown to love.”

Don shares Obituary band duties with John, and they also have a successful side-band called The Tardy Brothers. They are working on their next album, and Don expresses that touring will be a big part of the future. Don also played drums for Andrew WK’s band during the Obituary break. Earlier in their career, Obituary collaborated with a hip-hop artist Necro, and did a hip-hop vocal remix of one of their songs. “We are not afraid to have fun,” says Don. “We are fans of old-school rap, and I still enjoy listening to some of it nowadays—Ice Cube, Da Lench Mob, Geto Boys and, of course, my first love: The Beastie Boys.”

Don never considered Obituary’s six-year hiatus a breakup—“Just a break,” he says. “Looking back, it was a great decision to just take a break away from the music scene. It’s not an easy industry to try [to] make a career in. Thanks to the fans, we can keep doing this for many years, we hope.” As for my excitement to see the band live, Don says, “Obituary is one of those bands that gets more compliments about our live sound and performance than the albums. It is a testament to just how long we have been together playing onstage.“

Obituay’s lineup contains the original core of members, for the most part: Don, John and Peres. The biggest shift has come via their talented bassist, Terry Butler—who played for Death, Six Feet Under and Massacre—who joined in 2010, and newcomer Kenny Andrews on guitar. “Both bring such a great attitude and positive vibe to the table that it makes touring and recording such a blast,” Don says. “We are all best friends and are having more fun now than ever before, and I think that shows when you see us onstage smiling. We know it’s death metal, but we can’t help but smile.”

Obituary will smile a deathly grin in Salt Lake City March 1 at The Complex with Cannibal Corpse, Cryptopsy and Abysmal Dawn.