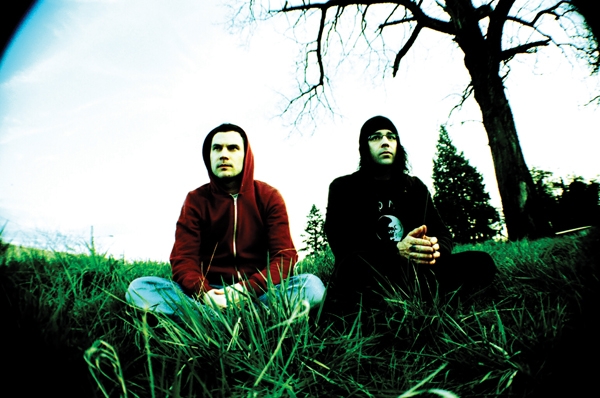 Ascend. A light skyward to the field rise claimant to freedom.

In the late 90s after the much respected Sleep parted ways, two bands were formed in its wake. The first one being Sleep guitar player Matt Pike’s High On Fire and the second one being OM, formed by Al Cisneros (bass, vocals) and Chris Hakius (drums.) Since then, they have released four full-length albums, a handful of live releases and splits with bands such as Current 93 and Six Organs of Admittance. In early 2008 Hakius parted ways with OM, and his spot was filled by Emil Amos who is also part of the enigmatic Grails from Oregon.

The groundwork for this new chemistry was put down during an OM / Grails tour about two and a half years ago. Cisneros says, “We immediately connected in an ability to speak and relate musical verses back and forth to one another, and we were both honed in on the same nuances and elements.”

Shortly thereafter, despite living in separate states, this new formation began putting together the framework for the newest album God is Good which will be released on Sept. 29. “Our writing and recording process for this record was generally all in a Taoist flow. We barely realized we had written a record. Even though it sounds pretty developed and thought out, we really didn’t have to use much analytical thought … which is very rare when approaching the technical side of making records,” Amos says.

“We immediately connected in an ability to speak and relate musical verses back and forth to one another, and we were both honed in on the same nuances and elements.”

God is Good was produced by Steve Albini who has worked with a wide range of bands such as Melt Banana, The Jesus Lizard, Neurosis and his own band Shellac. “Albini thankfully made the sonic aspect largely easy for us and we were free to just be players,” Amos says.

OM are often quick to be classified as stoner metal. Although this style will typically incorporate gruff vocals and heavy, layered guitar riffs, OM completely side-steps those characteristics and does things somewhat differently. The first thing one may notice is that the band keeps things minimal by use of bass, guitar and drums almost exclusively, negating excess aside from occasional instrumentation that makes subtle appearances throughout their work. The minimal approach of bass guitar and drums allows for the band to be rather flexible in creating a journey for the listener. OM’s tracks range anywhere between just under five minutes to just over 20 minutes in length, and because of this flexibility, each song manages to stay fresh without becoming over-repetitive and without beating catchy hooks into the listener’s ears.

“Albini thankfully made the sonic aspect largely easy for us and we were free to just be players.”

God is Good invites the appearance of additional instrumental pieces more noticeably than previous albums, “I played mellotron and piano, Emil did percussion,” Cisneros says. Some guest pieces also included use of tamboura and flute. The writing process and the inclusion of additional instruments was nothing but a result of an organic process as they continued to write the album. “I heard these lines in these other sonic ranges and when I first heard the melody I wasn’t certain whether it was to be played on piano or violin, or in what way it would come out in the end. As we continued to evolve the songs it became clearer and at that point, we started to really write the accompanying lines and find the right tones to bring out that certain extra color in the sound.” Cisneros says.

The vocals of OM are unique in the fashion that they are not prominent above the music, nor are they layered beneath it. Instead, they are mixed to blend with the instrumentation, and every syllable of each word is timed with the tempo of each song which results in patterns that resemble something closer to meditative chanting rather than singing. “The conversation between the instruments has more lyricism, energy and light, it renders the sonic shrine at higher ground,” Cisneros says. The new dynamic between Cisneros and Amos has worked naturally for the band. “Our writing process feels often as if it happens to us, the songs seem to just unfold themselves. That process has been intensified. We both have spent our lives absorbing music and working at it ourselves, and when we write together it seems we both already know what’s good about what we are hearing, or what is in need of reworking.” Al says.

One last element that separates OM from the wide majority of their peers is the obvious spirituality in the lyrics, and subsequently the music as a whole. “The verses, or lyrics if you will, are certainly not written in view of being grammatically sound. They serve as vehicles to arrive in the same place as the other instruments, pointed toward the same place, all for the same reason. Every part of the sound is devotional and surrendered as prayer. I guess you could say they are my version of prayer or devotion.” Cisneros says. OM is not your typical religious band however, nor do they claim any type of denomination. The themes OM tend to revolve around involve self-growth, both personally and spiritually, which as a listener, you must simply take from it what you will. “It’s an ongoing journey and refinement and the theme continues to evolve through life and through ones’ devotions. The entire movement should evolve. Some call it The Light, some call it God, some call it Truth, and some call it Nirvana. There are a million different words for it.” Cisneros says, “We’re here now. These are present living, active songs.”

“Our writing process feels often as if it happens to us, the songs seem to just unfold themselves.”

In early December 2007, during Hanukkah, the band had the opportunity to play live in Jerusalem. “The day preceding the show we spent the day in the Old City. We went to the Western Wall and witnessed the orthodox doing their vespers and devotions, on the actual day of show we had visited Golgotha. The forces and energies of those places put me in a different space then what had been the norm,” Cisneros says. The energy from the show built up and resulted in a performance that lasted for over five hours. “We began right around 9 p.m. and it wasn’t done until close to 3 a.m. It didn’t seem that way though.” Cisneros says, “The audience was with us through every note … it was very emotional.” OM practiced their vigil in a few other locations as well. “Tel Aviv was also an incredible show, and many people who were at Jerusalem the previous night attended that as well. It was just really overwhelming and it turned more into a tour of gratitude rather than a performance of any kind, on a personal level,” Cisneros says. This personal level is greatly apparent in everything OM does, and it shows from listening to Cisneros talk passionately about his experiences and about the journey of his own spiritual growth. “I can definitely see the growth in the ‘rings of a tree’ type of way, where I was when I was there, and what my perceptions were at that time. It’s a beautiful and inspiring thing to realize how expansive all of it is, and when that all happened, no matter how far you’ve gone you realize you haven’t gotten anywhere, and as a student it’s always learning and always going to be learning.” Rather than keeping up appearances, OM truly exists to seek nothing but their own spirituality. “I would rather be practicing, than just waiting for results,” Cisneros says.

And a new day dawns – the swan rise – the field cranes – aperture and fade away.