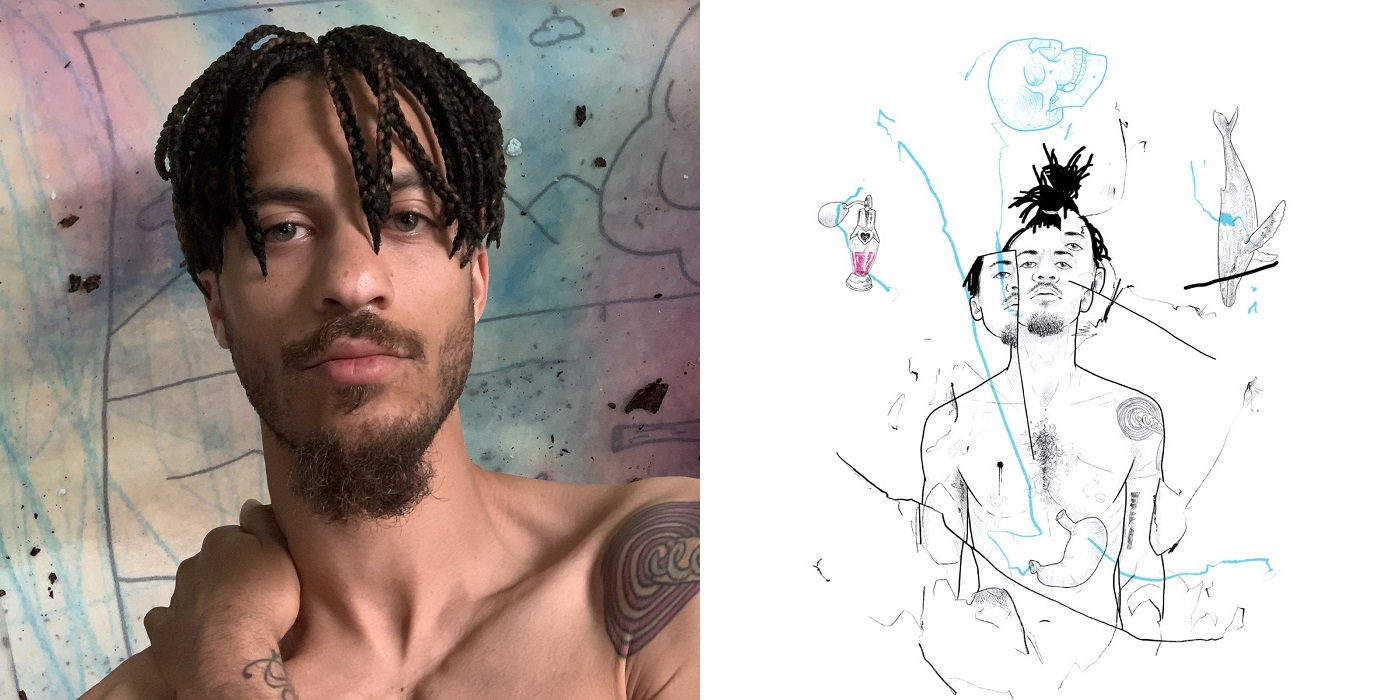 Patience and Peace: An Interview with Tyler Holmes

Tyler Holmes’ music sits on the precipice between the cathartic vitriol of self-expression and the warm blanket of universalism and empathy. Alongside some of their most stunning compositions and songs to date, such a dichotomy defines their new LP, Nightmare in Paradise. Reckoning primarily with two major life events—the dissolution of a five-year relationship and the resultant PTSD from a catastrophic experience while on tour in Puerto Rico—and featuring over a dozen collaborators including cellist Peekaboo, vocalist Maya Songbird and flautist Mitch Stahlman, the album possesses a sacredness, a hushed sense of power driving Holmes’ search for safety, comfort and healing.

While Holmes music has always dealt in open textures—the echoing electropop of S P O R T, the 17-minute drone piece that closes 2019’s Devil—Nightmare finds the artist working with space more than ever. “Since the underlying concept is trying to find a space of healing or calmness in such turmoil and turbulence, I think that’s good that that’s reflected on the record,” Holmes says. “It’s me trying to find a quiet place to create this clarity. When you have the space to talk about the issues or to think about them, you can see all the noise, you can see all the detritus. It makes the noise clearer and makes the static louder.”

With any and all excess cut away, Holmes’ ever-flexible voice finds every open pocket within the noise and spreads out a narrative canvas unbound from time, place or person. “I’m weird, and I want the[se songs] to express whatever weird thing I’m going through, but I also want other people to be able to take parts and be like, oh this is relevant to me in whatever meaning it is,” says Holmes. “I’m not using times of day, I don’t use too many direct signifiers like streets or names of places, because I want it to be a little more abstract and open-ended.” When they do concede to firm references—flights between San Francisco and L.A. on “Heart Token,” sleeping on a hospital floor in Puerto Rico on the electrified doowop cut “Nightmare in Paradise”—the effect is crushing, like suddenly finding a firm foothold amid the album’s journey through fog and shaky ground.

Part of attaining this fluidity between autobiography and generalized poeticism comes from the versatility in Holmes’ voice and vocal production. “I can embody these characters or these deep parts of my personality that are really hard to intellectualize,” they say of their use of different tonalities, effects and layering combinations in their singing. “Having different voices and spirits is helpful for that.” They point to a host of different personalities and vantage points from which their songs stem: “Sarcastic, insidious” and self-effacing, as on 2020’s experimental club banger “Nothin;” the soft and layered approach to spiritual balladry on Nightmare tracks such as “Song” and “Eden;” the “bratty” nature of their slurred delivery on the grunge-inflected “The Girl You Knew.”

Often, these varying perspectives and personas exist to enrich Holmes’ internal processing of the stories and experiences at the heart of their songs. “A lot of the time I’m saying ‘she’ or ‘her,’ I’m often referring to myself in a very pure way,” Holmes says. “The way I play with gender most freely is with my voice and with song.” This reflexivity, this desire to commune with the truest self, guides Nightmare‘s lead single, “Confuse Me.” Atop the steady pulse of a stuttering keyboard chorus, Holmes reveres the growth inherent in the passage of time: “Engorged with hope and ripe / Petals blushing with perfume / Brought the dead girl back to life / All her beauty has been exhumed,” they sing, drawing upon the slow churn of nature’s cycles to mirror the evolution—both painful and positive—taking place across the album.

“I can embody these characters or these deep parts of my personality that are really hard to intellectualize.”

More than anything, Nightmare in Paradise reads like a real-time reckoning with these forces of change and movement. Holmes describes their state prior to and during the making of the album as “a really confused place of pain and not knowing how to love myself or take care of myself … I’ve felt so bad in my life a lot, and I definitely felt some of the worst I’ve felt then—physically, mentally and emotionally.” The music chronicles both the realities of this pain and the coalescing power of selfhood that led Holmes along the path to peace. “Emotionally, physically, mentally, spiritually, I’ve changed by leagues, and I’m trying to become the best and healthiest version of myself. This album is a document [of that] for sure,” they say. And that documentation can take many forms: tossing out old versions of self on “The Girl You Knew,” channeling the biblical loss of innocence on “Eden” or visualizing this metamorphosis with gritty, gruesome detail on “Guts.”

Nightmare in Paradise closes with the stoic “Canvas,” a track full of layered acoustic guitar shimmering in rivers of arpeggios and Holmes’ most fragile vocal performance on the whole album. “I think the main thing that song really is about is patience,” they say, adding that embracing such a state remains one of their biggest hurdles to overcome. While the song was originally written as an ode to their lost relationship, Holmes finds traces of the album’s defining sense of abstraction here, as well: “To whatever thing that I want or need, there’s a path to it, and I have to be patient with myself to get there,” they say. “More than anything else, patient with myself and realistic about my needs and desires.”

I’m packing all my memories of you
It’s working
I’m patient
Fishing line to you, Dear
And don’t fear
I’ll be here