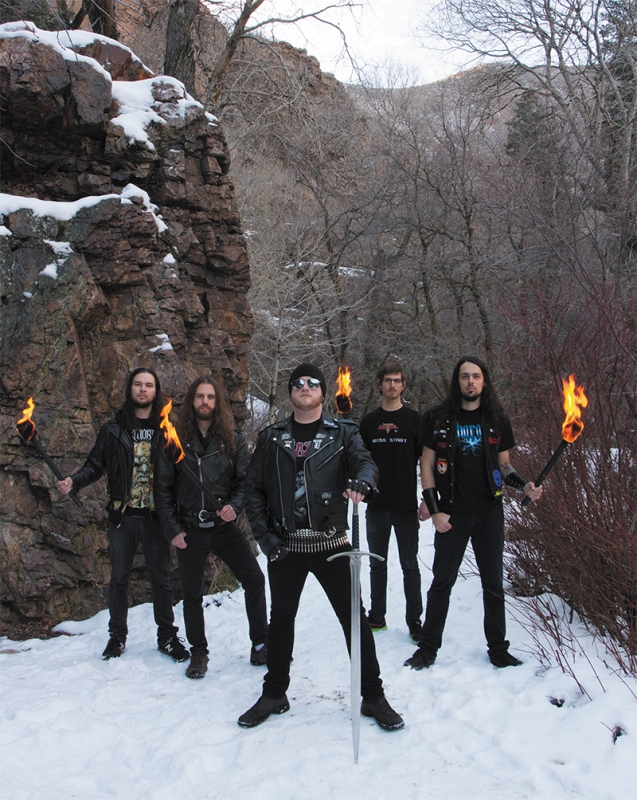 Raise Your Magick Steel: Visigoth Return With The Revenant King

Enough words have been written in unexpected praise of Visigoth, a band who, to many people outside of Utah, is a musical anomaly in an otherwise unremarkable state. After signing to Metal Blade, however, the band is now receiving an impressive amount of national attention, but virtually everyone is saying the same thing: “Who would have thought that there is true metal in Utah?”

The fact is, Visigoth descend from a rich legacy of incredible heavy metal music in Utah, a long history of innovation and tradition woven together into a diverse tapestry of sound. “[Utah’s] had killer stuff that was just not on the radar level of Metal Blade,” says vocalist Jake Rogers, “but that doesn’t make us the best or the first—it just makes us the most visible.” Citing bands like Ibex Throne (one of the first black metal bands to form in America) and Katagory V (who participated in the Prog Power USA festival in ’03), the band knows its roots well and honors its local forebears with hard-hitting, traditional heavy metal. Even now, SLC’s diverse array of thrashers, hessians, death metal devotees and black metal blasphemers are a well-kept secret from the rest of the world, but those who worship the riff in darkened mead halls and dingy garages across the city are well aware of the talent that graces our fair city. “It’s a small scene, but it’s high-quality small,” says Rogers. “If there’s a set with all local bands, it’s all bands that are definitely worth watching a full set for.”

Yet, even among the exceptional acts throughout the Beehive State, Visigoth have distinguished themselves as a household name among Utah’s heavy metal faithful. Even Jarvis Leatherby of Night Demon referred to them as “[SLC’s] hometown metal band.” With the Jan. 27 release of their debut full-length album, The Revenant King, they stand to gain some much-deserved exposure to an international audience and do so with a collection of songs honed and tempered on SLC stages.

The album itself is pure, unadulterated heavy metal—the kind of music that takes as much inspiration from Painkiller-era Judas Priest as it does from Twisted Tower Dire. Guitarists Lee Campana and Jamison Palmer flex their mighty metal thews on this record, every riff given thunderous puissance by Matt Brotherton’s bass. Mikey T’s intricate drums bolster the ground-shaking concussions of “Mammoth Rider” while Rogers’ final chorus on “From The Arcane Mists Of Prophecy” brings an epic climax to The Revenant King. While it’s clear in retrospect that Metal Blade would have an interest in supporting such a laudable local band, the tale of Visigoth’s signing is a legend unto itself. It all started with the release of their Final Spell EP. Mike Mendyk, owner of a small tape label called Swords & Chains, was impressed by their work. “He contacted us and said, ‘I’d love to release your music on tape,’” says Rogers. “Bear in mind, we didn’t send this to anybody. We just put it online—we did nothing.” The band agreed, and Visigoth became the first band to go to print on Swords & Chains. “Of course, the Internet—being the giant cesspool of negativity that it is—was telling Mike that he’d never sell cassette tapes. They were saying, ‘Only hipsters buy cassette tapes!’” says Rogers, with a hint of irony in his voice. “They sold out fast. The first show that we had the tapes at, they were gone.”

One copy found itself in the hands of Máirtín Mac Cormaic, owner of the Irish label Sarlacc Productions. He teamed up with the legendary Italian label Cruz Del Sur to release the Final Spell EP on vinyl, bringing it to a much wider audience. “Máirtín happened to be friends with Alan Averill, who is the lead singer of the Irish metal titans Primordial,” says Rogers. “Máirtín forwarded the music to Alan, who is an old school heavy metal diehard. He took a listen to it and felt like we had potential.” After finding a video of the band playing at Mojo’s in Ogden, Averill passed Visigoth’s EP along to Metal Blade, who decided to offer them a chance to sign with their legendary label.