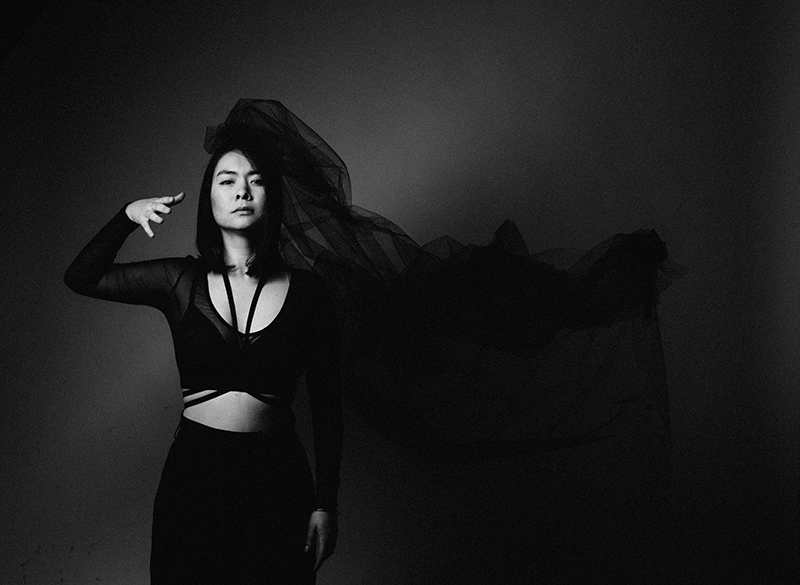 If Mitski were a camera, she’d shoot disposable flash portraits of average moments, then hand a print to you months or years later and completely break your heart. Her songwriting is revealing, flush with uncomplicated feelings and metaphors that are magnetic in their simplicity. “My body is made of crushed little stars / And I’m not doing anything,” Mitski sings on her esteemed 2016 senior album, Puberty 2. Her clear, confident voice has become necessary not only to her fans, but to the very framework of indie rock. Don’t miss her Salt Lake City tour stop—Oct. 19 at the Urban Lounge.

SLUG: Your Twitter feed is a mix of astrology, uplifting interactions with fans, political activism and the occasional cute dog. How does your social media presence reflect your mental state? How conscious are you of the influence you might have on your followers? Do you find your online community therapeutic, overwhelming, etc.?
Mitski: I try to tweet useful information, or things people would actually benefit from seeing, and try not to make it self-indulgent. Before I tweet anything, I think “is this content that would actually benefit someone, or am I just looking to be validated?” If it’s the latter, then I try to refrain. If it’s the former, like a good book that I feel is not getting enough attention, or a useful link with phone numbers of local politicians and other representatives, or resources for conflict resolution when you’re talking to a family member who you don’t politically agree with, for example – then I’d usually post that. I don’t tweet too much sad or angry personal stuff either, only because I am fully aware that my having a bad day isn’t anyone else’s problem or responsibility, and no one wants to see that; everyone is already going through their own shit.

SLUG: Your unapologetic attitude about self-care stands out online. What would happen if you didn’t insist on regular hot baths and pastries?
Mitski: I don’t think I’ve had a hot bath or pastry in a long time. Self care isn’t about specific material things, it’s about listening to your own needs and being honest with yourself. Sometimes self care is about doing stuff you don’t want to do, like admitting you were wrong, or cleaning your living space.

SLUG: I read recently that your biggest influences are women Japanese songwriters and Japanese filmmaker Miyazaki. I’d love to hear how they shaped your musical sense of being.
Mitski: I watch a Ghibli film every time I feel confused about the world, or start to forget my own sense of humanity. I grew up watching Miyazaki’s films, and they’ve largely shaped my sense of right and wrong, so I often return to them like an old wise family member.

SLUG: As an air-sign Libra who tours extensively and grew up globetrotting, what is your concept of home? How do you know when you’re there?
Mitski: I don’t know where home is, but I don’t feel the need to know either. I don’t need to belong anywhere, as long as I feel like I’m contributing to the world and to other people in some way. I just try to do the best I can with the space I’m afforded, and be more of a positive force than a negative one.

SLUG: It’s been a little over a year since Puberty 2 was released into the wild. How has your relationship with the songs changed since then?
Mitski: I think they’re more a part of me now, because I’ve played them over and over on tour. Those songs and I have past the infatuation phase of our relationship when everything is exciting and shiny, and we’ve entered a new phase where we’re comfortable and natural with each other, and love each other more deeply.

SLUG: “Your Best American Girl” has been used in college courses to describe complicated topics such as racism, classism and gender roles. I’ve also heard it described as a simple snapshot of navigating crushes and love as a young person. How do you wrestle with dark and light in your songwriting? How do you find the balance between the two?
Mitski: It’s wild that the song has become what it is to people I’ve never met. I just try to make sure each song I write has a humanity to it and takes into account the whole human, and real whole humans are both dark and light, both right and wrong, etc etc. It’s less that I try to find balance, and I certainly don’t want to start thinking of my songs as some sort of lesson for someone to learn, because that would make them preachy, shallow, and bad (in my opinion). It’s more that I try to remain honest as I write, and if I’m honest then both the good and the bad come out naturally and, I think, become a more accurate reflection of what it means to be human.

SLUG: You’ve directed full orchestras as part of your music, but you’ve also intentionally stuck to home recording at times (Bury Me at Makeout Creek). What excites you about music writing now that you’ve dedicated your life to it? What are you still hoping to explore?
Mitski: It’s exciting that I’m still a novice, I still don’t know anything, and there are whole worlds to explore. It’s exciting that there’s no end in sight to what I can learn and create, and I can spend a whole lifetime just learning about music without ever running out of things to know.

SLUG: Puberty 2 achieved quite a bit of well-deserved critical acclaim in 2016, and you have an adoring fan base, leading often to sold-out shows. You have to physically and emotionally put yourself on display constantly to do what you do. How do you overcome any fears or self-doubts while playing?
Mitski: I try to remember that fear of failure or self-doubt are actually very egotistical feelings, because they imply that you think you’re meant to look good or impressive and you’re scared of not appearing so, or that it would matter to the world or other people if you reveal yourself to be a failure. I’m just a flawed human and artist, I don’t need to look good or be impressive because it’s not about me – my function is to allow people the space to feel things, and give people a release. Whenever I start to feel doubtful or scared about performing or putting my music out there, I remind myself that it’s not about me, it’s about the audience, and once I’m no longer thinking about myself or how I’d do, everything becomes easier.

SLUG: Your songs contain a fair amount of imagery about the sun, moon and stars. Where does this celestial poeticism stem from?
Mitski: I think I just use a lot of nature imagery as metaphors, because I think all the thoughts and emotions we experience as humans are natural, so their parallels can surely be found in nature.

Catch Mitski being herself onstage Oct. 19 at Urban Lounge.