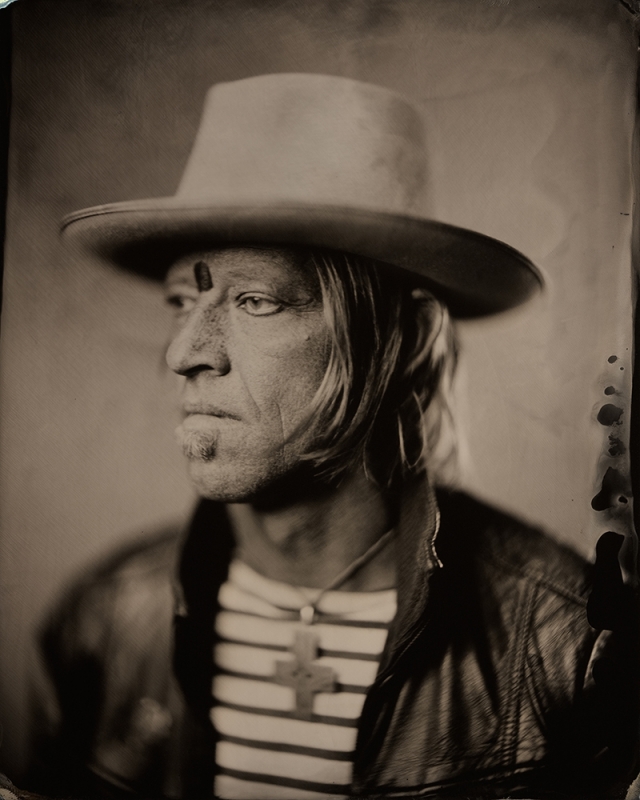 Drone is king. If you’ve been to a show in the last three years, you’ve undoubtedly heard it in some of underground music, from indie to industrial. It gets you in the solar plexus and holds you like a pinned insect. One place you may not expect it is from a band more commonly known for country-folk sounds and Christian themes. The latest album by Denver’s Wovenhand, Refractory Obdurate, is full of both surprising and expected elements as another fascinating chapter from singer/songwriter and visionary David Eugene Edwards.

From the early days of the “Denver Sound,” which Edwards first inspired with his bands The Denver Gentlemen and, later, 16 Horsepower he’s always mixed in a number of influences. Although he came from a strict Nazarene background where he wasn’t allowed to experience popular culture, he found his way into music. Blending heavy sounds—from punk to metal—with country, bluegrass and folk music, Edwards created something new, distinct from the theatrical cowpunk of bands like Wall of Voodoo, something altogether more organic and primitive.

Today, Colorado bands from DeVotchKa to Slim Cessna’s Auto Club perform dark, quirky Americana, but Edwards remains the master of the style, changing it up by adding elements of doom and black metal, the aforementioned drone and tinges of Native American music. Over the years, the band’s sound has gotten heavier, a reflection of Edwards’ tastes—the newest album is on metal/hardcore label Deathwish, Inc. The band is well-received at metal festivals in Europe these days. If they wouldn’t seem to fit in there, well, “We’re just in the ether,” Edwards says. “The whole alternative country [and rock n’ roll] world, they never wanted us to begin with, because of the things we’re singing about, but these people adopted us.”

Although his faith is often a subject—sometimes the only subject—of his interviews, Edwards is far from preachy and doesn’t care if his audience is secular. For him, God simply is. “God presents Himself through people and through anything He’s created,” Edwards says. “It doesn’t matter if someone is a believer or not. God moves and does what He wants to do, and what He wants to do is good.” For Edwards, whose song’s narrators often seem to be in the lowest places—self-aware sinners seeking God—we are all equally fallible. “That’s where I see myself,” he says. “In the gutter, looking up at God.” There’s no divide there to navigate between these two extremes—we are all in the same gutter. “The divide has been navigated for me, and that’s the whole crux of the message,” he says. We can rebel, but rebellion is just part of who we are as humans.

This theme of rebellion runs through Refractory Obdurate—whose title means “rebellious, rebellious.” Despite the home-spun cover art—a threadbare piece of patchwork that would seem to recall a simpler time—he says that it actually “is a representation of America”—a country born of rebellion—“a frayed, falling-apart quilt.” The theme of the album is that “the efforts of man, a rebellion, to better himself and the world around him is, for the most part, rebellion, and there’s this constant rebellion against rebellion.” What Edwards describes here is a perfect Hegelian dialectic, but while we think we are escaping our past and becoming more enlightened, we really aren’t. “There’s no rebellion from that— there’s no escaping that.”

But he’s a rebel in his own way, creating his own enigmatic sound. Edwards was self-taught even as a child. “I’m just impatient,” he says. “I didn’t want to rehearse. I didn’t want to practice. I just wanted to play,” he says, of learning the piano, violin, drums and more. “That’s still my attitude. I’ve just done that out of my own impatience and kind of created my own sound.” Even the microphone he uses is an enigma and not the usual equipment; a $10 flea market purchase with no markings that is “completely falling apart,” he says. He’s not entirely sure what it is, but the sound it creates, “like you’re singing through the telephone,” is a huge part of the warm, crackling feeling of the music Edwards creates.

Edwards has a distinct style of performance—he usually plays seated, with his eyes closed, and often seems to be in a trance, communing with God, the music or the audience, or perhaps all three. These states can seem so intense that I wonder how he can keep playing, or else, if it’s pure performance. “I have to strike some sort of balance because I can get really out there and just forget where I’m at, and that’s not good, so I have to rein it in to a certain extent,” he says. The technical difficulty of his performance plays a role, too. “I just end up paying attention to doing the song properly and not trying to impress anybody by anything but the song itself. I meet the audience within the song. I can’t communicate with the audience other than with the song itself. The conversation is in the ether, and that’s where I expect people to have to go to enjoy it.” Be sure to catch Wovenhand with Pontiak on Nov. 22 at The Garage on Beck. Learn more about the band and check out Refractory Obdurate at their official site, wovenhandmosaic.com.