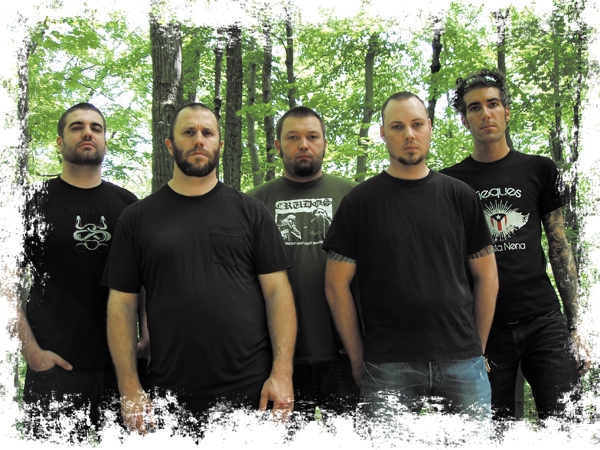 Royal or Not, Cable is Back!

Cable emerged in the early nineties right along the early pioneers of “noisecore” like Rorschach and Deadguy. What set Cable apart from most of their contemporaries was their melody––a very jarring, dissonant melody. Somewhere along the line, Cable moved away from the chaotic structures they helped create and started to mix in some dirt and whiskey, a heavier southern rock sludge started to dominate their albums. Due to Cable’s almost bi-annual self-destruction, they have been largely overlooked and surpassed in popularity by the very bands that copied their formulas like Coalesce and Botch. They have also called some very important labels home, including Hydra Head, Doghouse and Translation Loss. After twelve years, a few breakups and about ten releases, I thought Cable was done for good. Especially after they released Last Call, a documentary/live album on Translation Loss Records. The title of that album said it all: it was to be their last release. Then a year after Last Call I found an article where Cable had mentioned that the one studio track on Last Call had the line-up they wished they had on every album, and that gave me hope that, true to Cable form, they would get back together. Sure enough a year or two later, a friend with friends that work at ex-Utah label The End Records, mentioned that The End signed Cable!

Cable’s latest offering is called The Failed Convict and is due to be released August 18 on The End Records. The Failed Convict is the culmination of a long career and it shows. This album is every Cable release wrapped in one with some new twists. This band has more than paid their dues, and it is time for them to take the credit they deserve for putting out some of the heaviest, most pissed sludge music since Eyehategod.

SLUG: Can you give a brief history of Cable and explain what the goal was when starting the band, as far as sound and influences and how far you have or haven’t exceeded your goals?

Vic Szalaj: Well, we started the band out of the ashes of a band that broke up that Randy Larsen, Jeff Caxide and myself were in, I guess it was late 1993 or early 1994. The first goal of any of our bands back then was to do a demo and play some shows, which we did in the summer of 1994. We self-released a three song demo tape and started doing any show that came our way and the rest is history, really. I think we exceeded our original goal because we were able to release many albums and play with a lot of great bands over the years, at this point Cable is like a family unit, even with past members.

SLUG: How many times has Cable broken up?

VS: Shit man, I lost track a long time ago, probably around six or eight times.

VS: We enjoy ourselves too much and for the most part get along with each other. Like I said earlier, we are a family and with any family you have your issues, problems, disagreements, but you still love each other because you have to. The band really means an awful lot to us. We protect our legacy while continuing to push ourselves to make the best records possible within our ability. We are just stoked that people still care.

SLUG: Did you guys consciously do away with the title “The Royal Fuckers” or did people just forget that name?

VS: We never called ourselves The Royal Fuckers, that was Aaron Turner at Hydra Head, he coined the phrase around the time of Gutter Queen, I think, probably because we did the album and then broke up two months later.

SLUG: Montana seems to be a running theme from Gutter Queen to Pigs Never Fly, it got to the point where I actually asked Caxide at an Isis show if you guys moved there. What’s the story?

VS: Big sky country, man … it’s the ultimate freedom state, you can disappear, go off the grid if you will. It’s interesting, frightening and beautiful, why the fuck wouldn’t we sing about it? The idea of vanishing into the wilds of Montana has been a point of interest in our songwriting for years and its undertones are forever lingering, freedom.

SLUG: How did the deal with The End Records come about?

VS: A couple of the dudes from The End came to a show we did in NYC last Spring and we got to talking about shit and it all snowballed, it was actually almost a year in the making. We couldn’t be happier with the way we’ve been treated. All involved with that label are dead serious about music and about pushing bands. We can really appreciate that.

SLUG: The new record sounds massive, bigger than all your others in my opinion. What was different about this recording?

VS: Thank You! Well, first and foremost the amazing job that Joel Hamilton and his assistant Francisco Botero did, they were fucking prepared for the recording as much as we were. The overall vibe was great, the room was amazing, the choice of instruments and mics were perfect. Every now and again I guess the stars align and things just go perfect. That is what happened at the Convict sessions, mood, sound, people, location, it all clicked.

SLUG: You’ve mentioned that you have worked on the upcoming record more than any other. Explain Cable’s writing process.

VS: Our “process” on earlier records was simple, book some time in the studio a few months out into the future and then come up with material in time to record it. Very basic and primitive. The writing for the new album, The Failed Convict, was a LOT different, very methodical and thought out. We wrote the record for almost a year. Essentially, it is a lyrical story from beginning to end so we wrote the songs musically to follow a certain pattern, and the lyrics are written out like a movie, so to say. Track three directly impacts track four and vice versa, it was very, very unusual for us, but it was a blast and of course we leave it open-ended and open for interpretation.

SLUG: How did the song “Outside Abilene” come about? And how did you get Mike Watt on board?
VS: We actually sort of planned out the song to have Christian McKenna sing on it. I wish it was a more interesting story, but unfortunately, it’s not. Mike Watt is a good friend of Joel Hamilton’s; they have recorded and played together in the past. Larsen is a huge Watt fan and in passing mentioned it to Hamilton, and he got on the phone and got Watt on board.

SLUG: Now that you have done an album with the line-up you’ve always wanted, what is next?
VS: Well, we are planning a series of shows in July, August and September. I think around 10 dates to support the album, it’s not much by many standards but for us these days, it’s a lot. We are looking forward to playing the new material live. After that, the winter will be creeping in on us and I’m sure we’ll hole up and start playing with some new material.

SLUG: The lyrics of the new album, although telling a story, mention coming west, any chance of that?
VS: We discussed maybe doing a West Coast tour in the Spring of 2010 but you know, I hate to look too forward on stuff like that, it’s been talked about but that’s about it.

SLUG: What do all of you do for work, since you obviously aren’t a full time touring band?
VS: We have a truck driver and manufacturing guy, a social worker, a fuel technician and a writer. We all have serious full time jobs, which is part of the reason we do not tour much anymore.

SLUG: I think Cable outweighs my band God’s Revolver by a few hundred pounds, but what do you think will/could happen if we challenge Cable to a drink off?

VS: At this point you might have us beat, the years have caught up to me, man. I can only drink about 42 beers in a sitting now compared to the 86 I used to put down, but even old dogs have new tricks sometimes, boys.

To all fans of the heavy: The Failed Convict will be out shortly, get your grubby little mitts on it and start pressuring Cable to come out west, something that, in the fourteen or fifteen years they have been around, they still have not done. Convert to the true faith of pills, cheap whiskey and your own self-loathing.