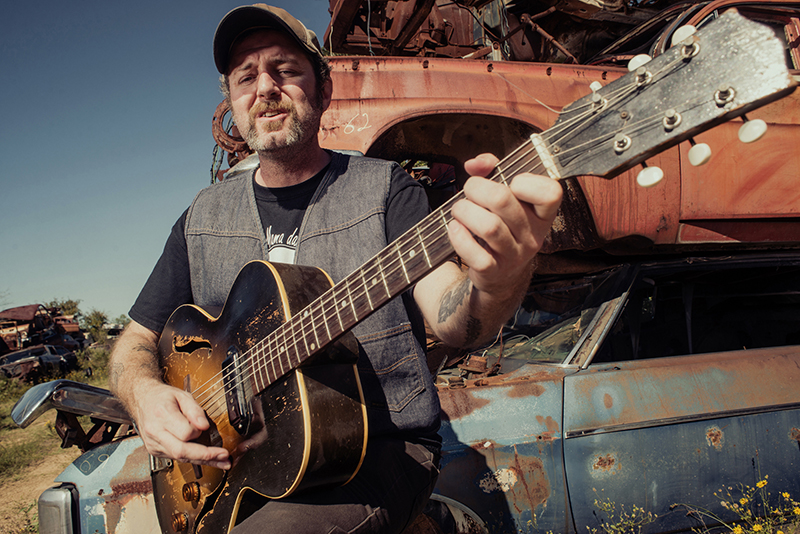 Scott H. Biram is simply unstoppable. If I believed in a god, I would wholeheartedly believe that he put Scott H. Biram on this earth to be the dirty-ol’ one-man band that he is and to be playing the disorderly blues and country music that he creates so well. If you’re not familiar with Biram, he is a roots musician who forwent a backing band, choosing instead to rely on his guitar prowess and supply his own percussion by pounding his foot on a homemade pedal board. He’s the singer-songwriter from Hell that wouldn’t be caught dead at a coffeehouse on open-mic night, but he will be taking his live performance to Metro Bar on April 23.

SLUG: What was your music career like before you decided to be a one-man band?

Scott H. Biram: Growing up in Texas, every kid learns to play blues guitar. I was in all sorts of punk and metal bands, and even a psychedelic metal band for a while called The Things. When I hit my early 20s, I rediscovered Doc Watson and bluegrass music and started playing in bluegrass bands, and that’s when I first started touring. Then all the bands I was playing in broke up, but I wanted to keep touring and playing. I had dabbled with playing solo before, but I knew I didn’t want to do the coffeehouses. I wanted to get into the rock clubs, so I started experimenting with different speakers and stomping my foot on shit, and that just kind of turned into the one-man band.

SLUG: Was there anyone else you knew of doing a one-man band?

Biram: I knew of other guys that had done it, like Bob Log III and Hasil Adkins, but I wouldn’t necessarily say they were big influences. I was more influenced by blues players like Lightnin’ Hopkins and guys that would play like they were playing out on the porch, and once I started drawing good crowds and I didn’t have to split the money with anybody, it just seemed like the smart way to do it.

SLUG: Is it hard to be out onstage alone every night?

Biram: My crew is like my band, so if I can make eye contact with my sound guy or my merch guy, then it’s like we can laugh about something I said or some story I told, but I still think about putting a whole band together. My sound guy is a great drummer, so maybe, one day, we’ll put together a trio, but I’m so busy, I just can’t put the time into doing it.

SLUG: You are able to combine so many genres in your music. Is that intentional?

Biram: I was an art major in college, and what I mostly did was collages, and that’s how I think of my records. I try to fit everything I can by combining blues, country, Americana, and even punk and metal—so it’s just me putting myself out there, and that’s all part of my musical makeup, so that’s just what I naturally put out.

SLUG: What has your experience been with Bloodshot Records?

Biram: They’ve been great and have brought a ton fans, and it’s been great to work with them. It’s funny because I like to think I was a turning point for them because, before me, they only had alt-country and Americana artists, and here I am: the foul-mouth, black-sheep blues rocker. After me, they started signing some other rock bands, so I think I’ve influenced them a little. I remember stopping in at the label before I got signed, and I saw on their website, they said, “We don’t sign metal bands, and you’re not the exception,” so I went in there and handed Robbie (the owner) my tape and said, “Hey, I heard you don’t sign metal bands, but I’m the exception,” and they called me a few days later.

Biram: Generally, I hear from people that I helped them get through a breakup [laughs]. I don’t know. I play a lot of songs in minor key and a lot of murder ballads, so maybe it’s that. I get the good-ol’ boys in the trucker hats, I get the blues connoisseurs who were seeing all my heroes in the ’60s and then all kinds of people in between, so I can’t say why they are into what I do, but I’m happy that they are there.

Any fan of music has seen bands and different acts live, but I can guarantee that you haven’t seen anything like Scott H. Biram. The intensity, the sorrow and even the joy that he can control a room with are things that few can even come close to. Biram will be playing the Metro Bar on April 23 with Supersuckers and Jesse Dayton.