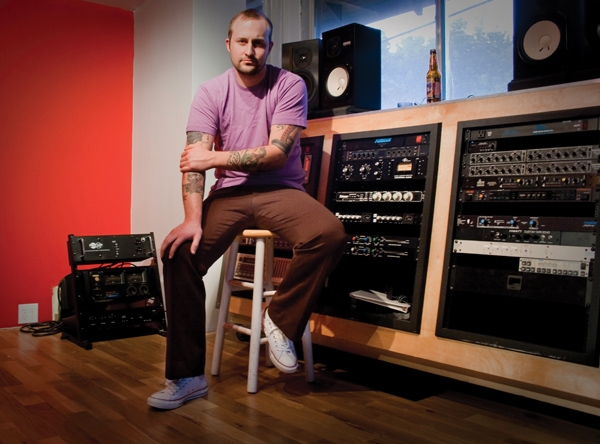 I had the opportunity of getting to know Scott Selfridge over a period of two years as he patiently recorded and re-recorded my band’s (Tolchock Trio) last album, so it was with great pleasure that I got to pick his brain one night in his bedroom studio for this piece. Instead of attempting to condense our one-hour conversation into a narrative, I’ll just let him speak for himself.

The Beginning:
“I just walked into a music store and they had it there for like $800 (Yamaha cassette 4-track recorder). I threw down a wad of cash that was in a Sabbath Bloody Sabbath cassette case and the guy thought it was so cool that he gave it to me at cost. The cool thing about that era of recording for me was that fidelity wasn’t even a gleam in my eye, I didn’t give a fuck about how good someone else’s album sounded. I was 16.”

Digital or Analog:
“Well, there are benefits to both and if the positives outweigh the negatives for each one, then you should go for that one. It’s a waste of time to try and debate what’s better—it’s what works. It won’t work for me to have a tape machine to lug around in my car—it will with a computer.”

New Recording Technology:
“I think with all the recording gear that’s around, musicians are getting into recording and it’s ruining their musicianship. You can’t do everything—you can’t be a racecar driver and a mechanic at the same time and do both really, really fucking well. I don’t think I’ve written a song in the last three years because I’ve been doing more recording and investing more time in that.”

Ultimate Recording Opportunity:
“John Coltrane. That would probably be pretty amazing, because I don’t really enjoy creating something that’s going to compete with the radio. I don’t think I’m very good at that, but I also like things that are a discovery and people that aren’t afraid to discover things about themselves. Coltrane, to me, is an embodiment of being candid. He’s just naturally in that state of being totally open and fucking free.”

Favorite Recordings:
“The Purr Bats album I did, (And the Cows Came Home in Pirouette) some of the Ether Orchestra recordings I’ve done and The Cunted album.”