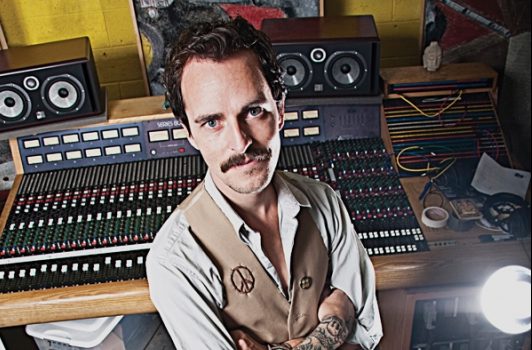 Jay Henderson knows what it means to pay for studio time.  An accomplished musician and member of local roots-rock heroes Band of Annuals, Henderson has spent his share of time both inside and outside the recording booth.  “I’ve always been a huge fan of music—writing, recording, producing, the works,” he says.  This zeal for all things musical led Henderson to a sound engineering program at Orlando’s Full Sail University—one of the nation’s leading training grounds for music business-related fields.  His experiences with recording have led him to the conclusion that a quality, professional recording session was prohibitively expensive for a lot of artists.  He explained, “People get in there and they’re so pressed for time that their creativity suffers.”   The sometimes excessive expense of booking a studio and hiring an engineer ended up weeding out those who couldn’t afford it and discouraged bands from using their time in the studio to experiment and have fun.  In other words, there really wasn’t a studio out there for those who could have benefited in both tangible and intangible ways from being able to push the record button and sing their hearts out.  Henderson is out to change that—to run a studio that caters to the everyday man.  It rings true when he says, “We’re in the business of keeping dreams alive.”

Feral Frequency is a 501(c)3 non-profit recording studio.  It is part of the larger non-profit cooperative, Feral Futures, that aims to “create community art, healing and learning spaces that provide opportunities for exploration, expression and places for people to gather, dream and create.”  The key word there is community.  Henderson clarified, “This, for us, is more about supporting the local scene than anything else.  It’s just one part of a much bigger picture and we enjoy every minute of it.”  In the case of the recording studio, Henderson and company are determined to run a space where people of all stripes can come and lay down a few tracks. It should be noted that being a non-profit doesn’t mean that there is no cost associated with the space.  Those wanting to record at Feral Frequency will still need to rent the studio and pay for any necessary support staff.  Where the situation differs is that Henderson is more concerned with creating a useable, creative workspace for musicians than he is with turning a profit.  The hope is that the studio will serve as a gathering place for talented people, those who want to “play, be wild and be happy.”  He continued, “We want to be an asset to the local community.  We want to keep costs as low as we can for artists by keeping our overheads low.”  He also spoke of offsetting costs by offering “workshops and classes on all parts of the recording process—from pre-production and writing to recording and even repairing equipment.”

The studio is currently located at Kilby Court.  This is a temporary situation, as Henderson and his crew ready a new recording space in a recently acquired building. “We are really excited about the new space.  It will be a really nice and vibey facility once it is completed,” Henderson says.  After the relocation at the end of this year, the further hope is that the studio will become a destination for creative people—a spot where touring bands can stop over for a few days and lay down a couple tracks.  A place where local musicians can take the needed time to record the songs they always knew they had in them.  A place where people are encouraged to reconnect with their wild selves and to help build the community that they always wanted to be a part of.  That is Feral Frequency.