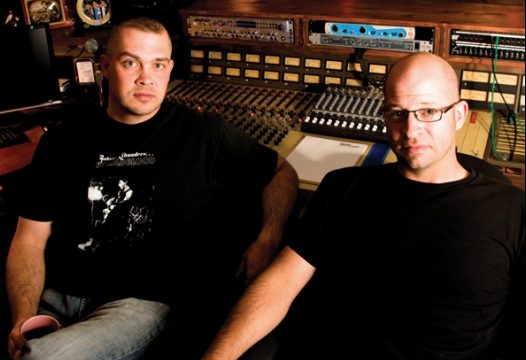 From the moment you step inside Salt Lake Recording Service, you know exactly what Brad McCarley and Nathan Tomlinson are going for. The century–old warehouse has a heavy air that only comes with age, and the worn wooden floors root you firmly in the past, but the modern flourishes like the art hanging from the walls, the low hum of electronic equipment and a sleek overall aesthetic fuse the past and the present into something that isn’t quite either. “I really like to go for a sound from the past or to try to make a song sound like it’s coming from the past,” says McCarley. “When we were talking about building this place, pretty much from the get go, we wanted to get older, vintage gear and try to re-create the golden age of recording,” says Tomlinson.

Salt Lake Recording started as a small operation in McCarley’s basement eight years ago, but McCarley’s roots can be traced to his hometown of Memphis, Tenn.  As he was growing up, McCarley recorded his own bands and his friends’ bands on a modest setup of a PA mixer and an 8–track reel to reel. McCarley was also a part of the Recording Technology program at the University of Memphis before moving to Utah. Three years ago, Salt Lake Recording began to take its present shape when McCarley and Tomlinson built their new studio using money from Tomlinson’s divorce. “It was all downhill from there,” Tomlinson says. “We looked for the right building for three months, got our place and started working on it that night.”

Salt Lake Recording is closely modeled after the legendary Sun Studio, which McCarley visited as he and Tomlinson were creating the vision for their own studio. “We looked at the size of their live room and how it was all set up, and that really informed us and what we wanted to do with this space,” Tomlinson says. The sheer size of the live room is the most striking thing about Salt Lake Recording and it is one of the key tools that allows them to recreate the past. “With live recording, you can capture the energy of a live performance and the interactions between the musicians as they play,” says McCarley.

As musicians themselves, Tomlinson and McCarley are ideal engineers. “A recording doesn’t sound very good unless it’s on time and in tune. Being able to hear that as a musician is huge,” says McCarley, who is a member of Kate LeDeuce & the Soul Terminators and Triggers and Slips. Playing in a number of bands has also bestowed an unexpected advantage on McCarley: it’s good for business. “The number one way we meet people is through playing shows with them,” he says. Though McCarley and Tomlinson are known for recording bands rooted in classic American genres like country, blues and soul, they have also recorded musicians in genres as disparate as jazz, reggae and even a comedy duo. McCarley and Tomlinson have proven that they can update sounds from the past, but these other ventures have also proven the slogan that runs at the bottom of their Web site: “will record anything, anytime, anywhere.”