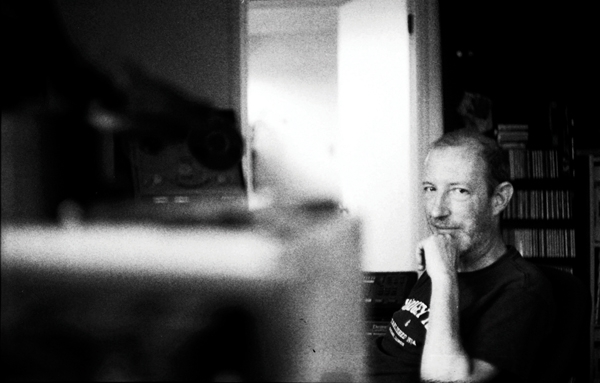 For a moment, walking into Herc’s home is like walking into anyone’s home, until you empty out into Herc’s Living Room, and the scene changes from cozy to state-of-the-art.  Although Herc’s high-end set up spans four rooms of his abode, the comfy furniture, carpeted spaces and secluded backyard garden keep the house that doubles as a recording studio feeling like a home.

A Salt Lake native, the soft-spoken Herc (just Herc) has quite literally a lifetime of experience as both an engineer and musician. Herc started laying down tracks professionally for Salt Lake’s local talents in 1993. In the last 16 years, he’s recorded around 150 albums. Herc has seen the Salt Lake music and recording scene grow up around him. Past clients such as Andy Patterson, Terrance DH, Matt Mateus and others have themselves become audio engineers at studios in the valley. However, when it comes to the technology of recording, Herc’s not entirely nostalgic for the old days. “I would never go back to analog in a million years.” he says.“I remember analog.  I mean, it was a big pain in the ass. Daily maintenance on the equipment, dropout, hiss, you know, stuff that you just don’t worry about anymore.”

When it comes to all things recordingm from the era of the ADATs to today’s digital landscape Herc is self-taught. “What do they say? ‘If you remember the 60s, you weren’t there’ . . . I guess I was there.  I don’t remember the first time I recorded music, really, late 60s or early 70s . . . when I started there was no school.” Herc says, “There was nothing . . . I just figured it out.”   He paid bills as a computer programmer before opening Herc’s Living Room.  “I started the studio . . . because I didn’t want to work for other people anymore,” he says.  A career as an audio engineer with such a lasting and successful recording studio out of your home seems like a pretty damn sweet gig, but it’s life as usual for Herc. “I don’t have any complaints,” He says. “I’ve been doing this a long time now. The upside is you don’t have to go anywhere, the downside is your girlfriend sometimes isn’t happy with the band upstairs, banging away.”

Nevertheless, in Herc’s Living Room, the musician’s comfort is second to none––an approach to engineering informed by decades of experience. “I did a lot of recording as a musician in other studios in the 80s, and it seemed like most of the engineers were kind of jerks,” Herc says. “If you said, ‘Hey, can we put a mic here?’ They said, ‘No’. Unfuckingbelievable––I vowed not to be like that.”  Herc leaves ego at the door—it’s the musician’s time and space.  “I don’t try to control the process too much,” he says. “Often the best results are the product of accidents. If you over-control the process, accidents can’t happen.  I think that if an artist can interact with the process of recording, they will have better ideas, be more productive and have a lot more fun and less stress in the studio.”

The Living Room is nestled in a quiet neighborhood close to downtown.  If you’d like to know specifically where, you’ll just have to shoot Herc an email.  The studio is open to the public, but only with prior warning.  It is the man’s home, after all.  Herc’s client list occupies a wide variety of genres, but if he could ask for anything it’d be “more rock bands!” Herc says, “I like to do rock bands.  I do a lot of acoustic stuff, a lot of hip-hop stuff, but [rock is] what I play.”  Interested parties can Google “Herc’s Living Room” for a complete equipment list, more contact info and photos of the digs.