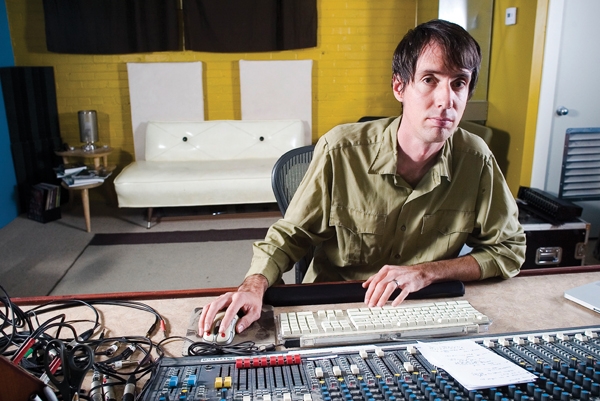 Hyrum Summerhays at the board in Audio Space.
Photo: Chris Swainston

SLUG: What is Audio Space setup like?
Summerhays: You know the scene on Back to the Future with the giant guitar amp?  It’s kind of like that.  I have yet to build a time machine out of a Delorean, though I did make a sketch of some of the key components after slipping in the bathroom while trying to hang a picture.

SLUG: How did you get started?
Summerhays: Started in my mom’s basement, then as soon as I had a car I would stuff it FULL of gear and drive to people’s garages, practice studios, or wherever we could set up for a few days and record some music.  My poor Chevy Sprint could barely move with all the gear inside.  It only had three cylinders after all.  It was great, however, for the pizza-delivery job I also had at the time. I was attracted by the blinking lights and strange machinery. I remember when bands and musicians would perform at my elementary school, I was often as interested in the sound equipment and the people running it as I was in the band. So once I was in a band myself, it just made sense to start recording in order to surround myself with music and blinking lights.

SLUG: Is recording music something that you do full time?
Summerhays: I am a general music and technology geek, so most of time is spent doing something that relates to one or the other or both.  I also build and repair electronic accordions for Accordions International.  I am looking forward to this year’s Las Vegas International Accordion Convention (Oct. 19-22).

SLUG: What are some of the features of your studio that set it apart from other local studios?
Summerhays: The studio itself consists of one main tracking room big enough to fit a whole band, a secondary tracking space of decent size, control room big enough for band and significant others to fit in and make unhelpful remarks while some of us are trying to mix. Perhaps best of all is a rooftop break area for getting some fresh air between takes or conversely getting in a quick smoke if you are so inclined.

SLUG:  Do you have any interesting studio instruments?
Summerhays: A gigantic upright piano that, no matter how many times you tune it, kinda sounds like it’s in an old west saloon, Fender Rhodes (how could you not love it?), Hammond Organ complete with Leslie Speaker (it’s not real if you don’t hear the sound of the rotating speaker!), 3 or 4 different accordions in varying states of repair, Etherwave Theremin (built this from a kit, complete with custom 2 tone paint job, RIP Bob Moog), miscellaneous percussion goodies, and various other sundries I shouldn’t get into here.