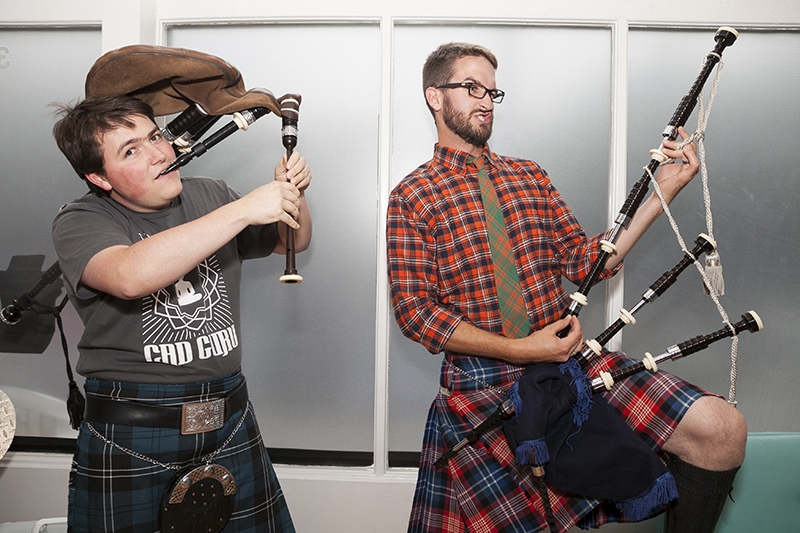 (L–R) Zach Lees and James Moyar of The Soggy Scots meld traditional and quirky aspects into their bagpipe playing, and will sound the call at the CLC DIY Fest. Photo courtesy of Gavan Nelson

Songcraft at the CLC DIY Fest

It may be presumed that the Craft Lake City DIY Festival on Aug. 9 and 10 is limited to showcasing handmade crafts to hold and take home. However, joining the surplus of local artisans and DIY Engineers are 50 local musicians and performers who will show off their talents in the form of instrumentation. These DIY bands work on their craft with the intention of inspiring their audience, and the handful we spoke to all shared the same sentiments of interacting with other talented musicians and artists to propel their motivation.
The Soggy Scots will kick off the festival with a march through Gallivan Plaza and some epic piping. The two friends, Zach Lees and James Moyar, from Payson, Utah have played bagpipes together since high school, and with the variety of events and venues they’ve performed at in the past, they’re certain to initiate the activities on a monumental note. “We’ve played pretty much everywhere you can think,” Lees says. Their Facebook page (facebook.com/TheSoggyScots) boasts of playing at “funerals, birthdays, committee meetings, celebrations, weddings; indoors, outdoors, in the sun and rain, on street corners, in forests, and even once atop a barn.”
There is one event they haven’t played, and the two find it regretfully so: Know anyone throwing a bar/bat mitzvah? Expect to see kilts and hear “Scotland the Brave,” but don’t expect everything to be traditional: “Zach here will make up stuff as we’re playing. He’ll start to play a harmony, and bust it out … I follow him—he’s the piper extraordinaire,” Moyar (the alleged “fashion sense” of the group) says. While the two have no blood-ties to any clans in Scotland, that doesn’t stop them from hearing all about the history of bagpipes. “A lot of people walk up to you, even if you’re just warming up in the park, and they’ll tell you it’s beautiful, and thank you, and they’ll tell you their whole Scottish lineage, which sometimes can get a little tedious because you just want to play, but it is rewarding because then they might even cry about it … It’s a nostalgic sound for a lot of people,” Moyar says.
For the two of them, playing bagpipes has developed into a fun activity to share time with each other. Since the two of them grew up together, they had plenty of tales of adventures in cemeteries and belting their pipes around their neighborhoods late at night. Although they predominantly play bagpipes, the pair may pull out the banjo, didgeridoo, drums, bell horn or even whistle. Make sure to catch them opening the DIY festival on both days, and see them in the busking area Friday at 5 p.m. and Saturday at 12:30 p.m. 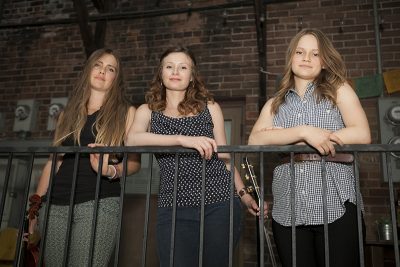 Friday also features the sweet harmonies of The Souvenirs. This sisterly-trio (Marie Bradshaw and Kiki Buehner are sisters, and their close friend, Corrine Gentry, might as well be) has recently parted from their previous project with The Folka Dots to focus on their three-part harmonies. “The Folka Dots actually started with just the three of us initially, and we added members as time went on. It seemed natural to go back to our roots and play with each other,” Bradshaw says.
With this new transition, the trio complements each other, and their focus is easier to maintain, as they can balance hanging out with working on their songs. This came as a surprise to them, but as Gentry says, “The way that our harmonies form when it’s just the three of us in a room figuring out a song gives you goosebumps, because there’s nothing else that can distract you from the three voices coming together, besides the guitar and maybe a fiddle here and there. It’s been really cool to see how the harmonies develop, because that’s what we focus on.” Buehner adds to that, saying that she “was surprised to realize, when we switched back to just the three of us, that a lot of the harmonies I was doing were the same as [Bradshaw] or [Gentry]. I had to change a lot of things because I didn’t notice them—I didn’t have the time to really dig that deep before.” With the simplicity and intimacy of the trio, the songs are lyric-heavy and will come as a delight to deep-music listeners. Catch them on the 90.1 FM KUER Stage Friday at 5:30p.m. 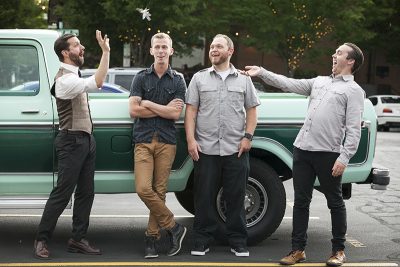 On Saturday, you’ll find a showcase of Vincent Draper and the Dirty Thirty and Worst Friends, who all boast of great chemistry between their respective bandmates, enabling each set of musicians to progress and grow as a band. The name “Vincent Draper” (his real name is Carson Wolfe) is an homage to two men that he admires: Vincent van Gogh and his grandfather, named Draper. Their new album, SAM, released on July 27, was created as a tribute to his grandfather.
Themes of nostalgia permeate their folk-rock sounds, and as Eric Lund, the guitar player, says, “There’s a lot of heart in it, and sometimes it’s good and sometimes it’s heartbreaking, and I hope that people can kind of relate with it.” When asked what he is nostalgic for, Wolfe says, “I look at the way my great-grandparents lived and loved, and the things that were important to them—they didn’t have distractions in their life. I’m very lucky to live right now, with technology and medicine and SLUG Magazine, but I’m often envious of earlier times.”
The Dirty Thirty started as a side project from a previous band, Small Town Sinners, which included Lund, and the rest of the band came together through word of mouth. The five of them (which includes bassist Jon Robertson, drummer Alex Terry and occasional member, keyboardist Aaron Martell—not pictured) work together hand-in-hand, although Wolfe usually brings the main melodies and lyrics to the table.  Terry says, “I think we’re pretty diverse as a band, but we come together just fine. If I could put it simply, we’re a pretty good representation of our demographic in the state, because we all come from different backgrounds, but I think we work together really well. When we all get together to collaborate on the songs, there’s never any sort of problems—no ego or anything like that. It’s pretty straightforward.” Wolfe agrees, saying, “We are lucky in that respect.” Catch their set on Saturday at 1 p.m. on the 90.1 FM KUER Stage. 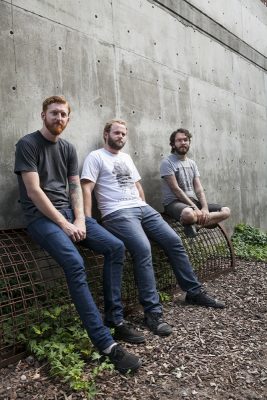 Bringing sludgy, math-rock jams to the festival, Worst Friends plays on Saturday evening. Band members Jarom Bischoff and Mike Cundick have a long history of playing in various bands together, most notably in Loom. While Loom still exists, it’s become a backburner project as they focus on this newer project. As Bischoff says, “At a certain point, there were just too many cooks in the kitchen, and Mike and I had issues because we were both in charge of everything, so that naturally happens in a band. I ended up leaving/getting kicked out—it was pretty mutual I suppose.” The two wanted to keep jamming and writing together, Loom notwithstanding. Bischoff says, “So, sort of as a sarcastic joke, we called the band Worst Friends because […] everyone thinks that we butt heads or whatever.”
Cundick adds, saying, “Now we’re just trying to figure out ways to piss off Elliot enough to join the club.” Elliot Secrist, their bassist (who also is a part of a number of projects, notably God’s Revolver and now Day Hymns), joined this past year, which was “an easy decision to make,” according to Bischoff, after Secrist approached the pair to see if they wanted to add a bass to their lineup. Unlike a majority of bands who focus on a guitar player or singer to do most of the writing, the trio come to the table pretty evenly with their experience to work on their riffs and transitions until it makes a cohesive whole. While there is hardly a lack of material, Secrist says, “The problem with so many options and ideas is that we have to cut a lot of the fat and narrow it down. Otherwise, we have these 10-minute songs and we’ll just look out and the crowd is just glazed over.” The clearest sentiment between the musicians was one of admiration. “For most things I’ve been a part of, I kind of get things first and then help other people get it, but ever since I’ve been in this band, it feels like I’m the one that’s trying to catch on and catch up with these two. It’s a new experience—it’s humbling and it helps me grow,” Cundick says. They look forward to playing at the CLC DIY Fest, and hope the crowd will be receptive. Be sure to catch their set on the 90.9 FM KRCL Stage Saturday at 7:30 p.m.
With two stages and various busking areas, there’s no better place to see the melding of local music and art this summer than the Craft Lake City DIY Festival at the Gallivan Center on Aug. 9 and 10. Find the full lineup at craftlakecity.com.