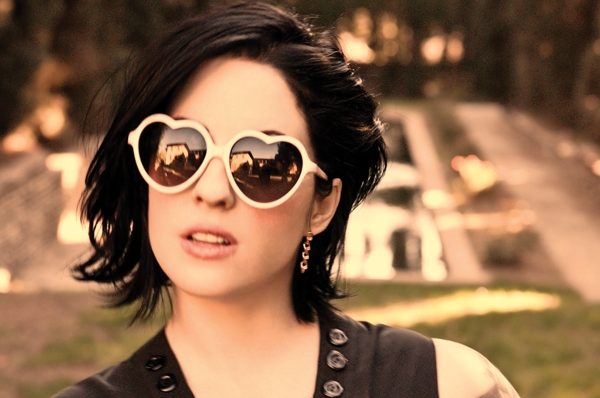 Spinnerette: Changing in a Big Way

Spinnerette’s first album opens with erraticly grunged-up guitar and the unmistakable voice of frontwoman Brody Dalle letting you know she’s just a “girl out looking for love.” Before you react with your preconceived notions about what that might mean––which a lot of people might do based on Dalle’s much-publicized makeout sesh with current husband Josh Homme of Queens of the Stone Age while she was still married to Rancid’s Tim Armstrong––she’s a lot more settled down than her lyrics and image might suggest.

A typical day with Dalle usually begins with the most unremarkable of homemaking tasks: preparing breakfast for her daughter, Camille, and a spot of tea for herself, “which is really Australian of me––still sticking to my roots,” Dalle says. Her day might then include talking shit and buying music for her daughter at Amoeba, her sister in tow, picking up a Go-Go’s record most recently––“I told my sister what dirty slutbags those girls are.” Dalle’s day usually concludes with some sort of exercise routine and might finish with a two-hour long hike in the hills around the Los Angeles area, “I’m a valley girl,” she hints as to where she might have been wandering. Quite a laid-back routine from the former leader of The Distillers and a lady sporting some fabulously ghetto tats––a “Fuck You” etched on her arm, for one.

When Dalle isn’t doing matronly things, she’s paying due diligence as a rockstar, performing with her band on The Late Show with David Letterman recently and filming music videos in the auteur Liam Lynch’s basement. Speaking of the video Lynch made for Ghetto Love, Dalle says, “It’s one take. I went over to his house––he’s also a valley girl. He had his camera and a green screen in his house cuz he’s always making crazy-ass movies and videos. He made this beauty light for me, handmade on a lazy susan. It was amazing. I was really impressed. He’s so creative. He’s a fucking genius.” Carousing with the comfortable and crazily creative must be a nice lifestyle for her, and Dalle concurs, “It’s great being friends, but if you can also do things together, it’s even better.”

“He had his camera and a green screen in his house cuz he’s always making crazy-ass movies and videos.”

The Australian-born singer, who still keeps her citizenship in case she needs to leave the US if “shit is getting nuts,” is working on being a bit more creative herself by dabbling in the videographic arts. “I want to make a documentary. I want to interview all the great women [of punk], like Patty Smith, Chrissie Hynde, Blondie, Tobi from Bikini Kill. I’d interview Courtney [Love]. I want to interview female musicians and female comedians because I think their plight has some kind of connectors there.” Dalle says. She’s apparently been in this creative frame for a while, starting with an interview she did with Janeane Garofalo in New York a few years ago. Asked if she used a cinematographer for the shots, or if she will, Dalle says, “I don’t think it’s too much brainwork––you set it up and let it run. I got this video camera in Japan and I still don’t know if I’m fucking using it right, you know. I think it’s one ‘On/Off’ button to me. The rest is all Chinese to me—or Japanese, in this case.” Dalle says of her proficiency with these sorts of things, “The guys used to call me ‘T.G.’: Technical genius. If things broke on the [tour] bus, I’d fix them.”

“I want to make a documentary. I want to interview all the great women [of punk].”

Dalle has always been DIY and fiercely independent, it seems, and that extends to her music as well. In fact, it’s best not to compare her work with her husband’s projects. “By no means am I going out of my way to sound like my husband’s band. That’s ludicrous and why the fuck would I do that, you know?” Dalle says, “It’s the sound of it. Those guys [Spinnerette/QOTSTA guitarist Alain Johannes and Homme] work in the studio together, so maybe they picked up some of the same techniques. And our latest song, Baptized by Fire, sounds nothing like Queens of the Stone Age. Nor does fucking Spectral Suspension or Sex Bomb. Maybe the dirtier grungier shit you could put in the same pocket, but it’s not the same. It’s not the same at all.”

Speaking of dissimilar things, Dalle is OK with bucking current trends in the industry. She is quite content being a harder-edged rocker and says, “You know, it’s better than being a folk singer anyday.” Continuing comments on the biz, she says, “It’s about time for some fucking rock n’ roll to come back. Everyone’s so complacent about music now. I think there’s about to be a whole bunch of stuff that we’ve been missing for quite some time. That’s the point––when something goes away, it’s like a necessity for the hole to be filled. All the record companies saying ‘You can’t sell rock’ is bullshit. It’s about to change,” Dalle says: “It’s about to change in a big, big way.” Dalle is one helping to change the scene while putting all your preconceived notions about her on their ear. “I liked when people gave a fuck. People are like, ‘Hey, chill out,’ and I’m like ‘No.’ I don’t like to stand by and let shit happen.”