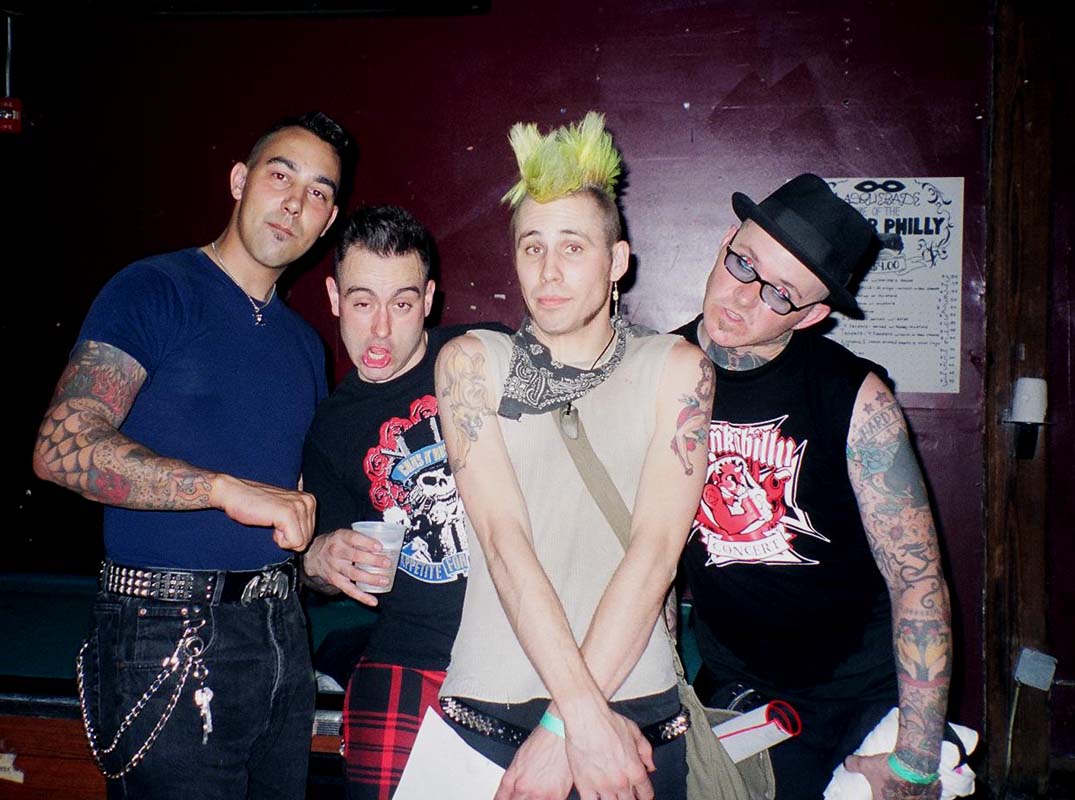 Stepping Through the Cemetery: 12 Step Rebels

From the deserts of Albuquerque, N.M., comes the pure psychobilly sounds of the 12 Step Rebels. The 12 Step Rebels are rocking the graveyard with their songs of creatures of the night.

[12 Step Rebels]The 12 Step Rebels started in 2000, released an EP on a label that went defunct shortly afterward, then signed to Dead Body Wreckerds in 2003. Their first full-length, Go Go Graveyard Rockin’, recorded in November 2003, was produced by Geoff Kresge (ex-Tiger Army, Horrorpops). I had a chance to speak with Jakob Insane (guitar/vocals), Mad Dog Chad (drums/backing vocals) and Hamburglar Nate Hancock (upright bass), the ghoulish members of this chilling band, about their record and upcoming tour during a break in band practice on a Thursday afternoon.

SLUG: Why do you think that psychobilly can get away with not taking itself too seriously, unlike other dark genres like goth and death metal?
JI: Some bands take themselves way too seriously, unfortunately. Psychobilly is more of fun music because you’re mixing rockabilly in there, so it’s more of lighthearted party music; where in gothic music, your whole life is just bleak, blackness and despair. Psychobilly is just fun music, where you can take campy movies and create songs about them, or wear cool makeup. I think overall, it’s a fun genre.

SLUG: What do you think of all the new interest that psychobilly has been getting recently?
Hamburglar Nate Hancock: It’s good. It allows bands that work really hard and sacrifice a lot to make a living. We don’t play music to get rich, but we also need to feed ourselves. It’s good that more people are getting into it and it’s getting more exposure, because then bands that have worked so hard to try and make a living can actually do that now.

SLUG: Do you think that psychobilly will ever blow up and be a huge trend?
HNH: You never know. I guess if you would have asked Nirvana back in the 80s if they were going to blow up and be a huge trend, they probably would have said no. In the 70s, you had arena rock and then came the Ramones, who just redefined music. Things keep repeating themselves, so I think we’re ready for another blow-up of the stripped-down sound.
JI: With all that in mind, I say no. I don’t think it will get really popular, but you never know. It already is pretty popular, but I don’t think it’ll be the next big thing; it won’t be the next emo.

SLUG: You guys were the first release on the new label Dead Body Wreckerds. What was that experience like?
HNH: It was stressful. It was a daunting thing. They didn’t put stress on us, but to ourselves, I mean, we’re the first release on a new label, so if our album didn’t sell, that’s the end of that label. It’s really cool, though, we have a family-like relationship with them. When we go out to California we stay with Geoff [Kresge], or one of the other executives. Their families cook meals for us and they take good care of us.

SLUG: What led you to play psychobilly?
JI: We started to play a rockabilly style, and I sucked at it. Now that I know more about music, rockabilly is a 100 times easier than psycho. All I have to do is turn the guitar way down and fingerpick, and put on some echo, but I think we went in that direction because that’s what I was listening to more of at the time. I had a punk-rock past and a rockabilly past, and I still listen to roots music and punk rock a lot, so it was only natural to combine the two.
HNH: We don’t fluff it up. When we came together, Jake had some songs and we just started playing and the sound just went in that direction.

SLUG: Nate, how did you come to play the stand-up bass?
HNH: I was actually playing guitar and singing in a different band before I got stuck with these guys. I had never even thought of playing upright bass, but they were having a hard time finding a bass player, and just to keep one of my favorite bands alive, I borrowed a bass from a friend and learned just enough to fill in until they could find a real bass player and two weeks later, I played my first show with them and we’ve been going ever since.

SLUG: Is there any pressure to step out of the shadow of psycho bands like Tiger Army or the Nekromantix?
Mad Dog Chad: We’re good friends with those bands, but if you pick it apart, you’ll see that yeah, we do play the same genre of music, but Nekro style and Tiger Army style and 12 Step style are three totally different things. It’s weird seeing a review that talked more about Geoff than it did about the band.
HNH: Geoff and Tiger Army have done a lot for us, and Geoff having been in Tiger Army is going to get us compared to them right off the bat. It’s unavoidable that we’re going to be compared with those bands.
JI: It’s not like they’re comparing us to the worst band on the planet.
MDC: They’re not comparing us to Papa Roach. (Everyone laughs)

Be sure to see the 12 Step Rebels opening up for Tiger Army May 6 at In the Venue. Their blood-chilling record, Go Go Graveyard Rockin’, is out now, so check it out or live to regret it!