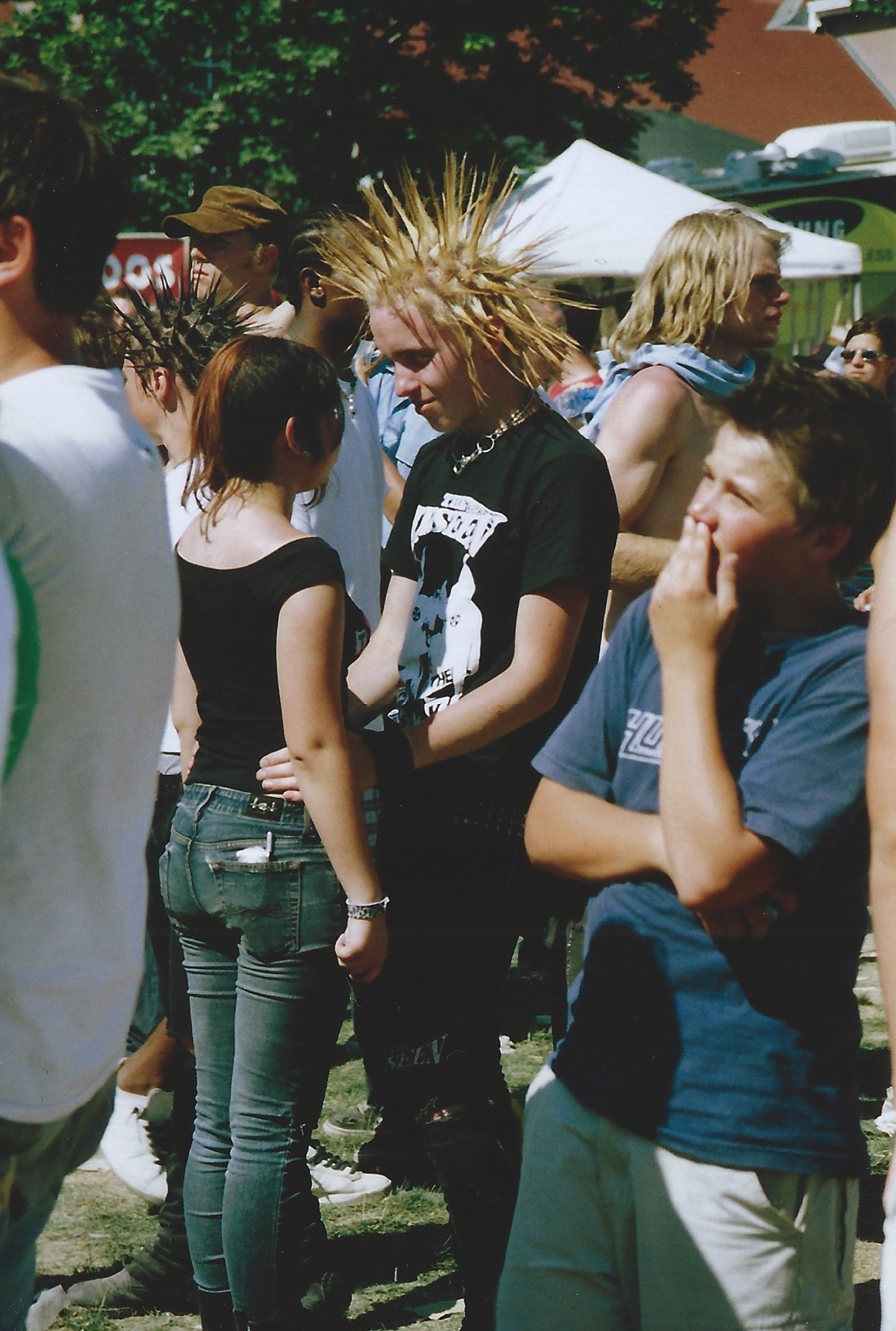 THE COUNTERCULTURE WILL BE TELEVISED: A Story About the Vans Warped Tour The Vans Warped Tour has become somewhat of a traveling punch in the face to underground and independent punk music. With a slew of corporate sponsors, Clear Channel Broadcasting support and extended MTV coverage, some may say the tour has nothing to do with punk rock at all. All opinions aside, the tour goes across the U.S. every year and sells out auditoriums and ampitheaters of a size only bands like Sting or The Rolling Stones are used to. Many, myself included, may see this as a threat to the entire concept of counterculture and alternative music, but there are some who truly are blessed to have this show in existence.

[The New Transit Direction]No, I’m not talking about the kids who see their first “punk” show by way of the Warped Tour; I’m talking about the independent bands who are put on the bill. These are bands of people you know, you went to high school with them, you order your iced coffee from them at the local cafe, you take them for granted when they play two or three times a month in local venues.

For the past three years, local Utah bands have been fortunate enough to receive exposure to thousands of kids across the country while playing select dates on the Warped Tour. In the summer of 2003, Salt Lake’s The New Transit Direction were the first band in the beehive to do such.

“I think we played about five shows, all in the Midwest. It was hot and windy; it actually kinda sucked at times,” claims Josh Asher (vocalist/guitarist for TNTD).

“Yeah, I mean, if you’re just a little indie band in a van, like we obviously are, it’s pretty rough. You just drive your ass off and get there in time to set up, play and tear down to move to the next city. I’m sure it’s a lot easier for the bigger bands,” added Jake Hawley (guitarist TNTD).

When you think about a tour which has a dozen MTV bands on a main stage, miles of merchandise and swarms of vendors rounding teenage kids up under a ridiculously hot summer day, it’s probably a lot harder to get noticed than one may think when you’re a band on TNTD’s level playing on a small B-stage.

“Well, one of the good things was that we got to play with a lot of nice bands like The Letter Kills. Those guys were really cool. Overall it was pretty fun, and definitely a good experience for us,” Josh admits.

So, how does a little four-piece band from Salt Lake get on a bill like the Warped Tour?

“I think someone just asked us. You see, when we did it, we played on the Volcom stage,” explains Jake. (Every stage on the tour has its own individual corporate sponsor.) “I think someone who was booking bands for Volcom just approached us.”

“It was a little different that year, because most of the bands were just real fast pop-punk groups, and our style was a little more rock than most. So, I guess we stood out that way,” Josh remembers.

TNTD was formed in 2000 and released a three-song EP (recorded by J. Robbins) in 2002; that same year they were signed to Some Records, then, in 2003, they released their first full-length album, Wonderful Defense Mechanisms. Since then, they have done extensive touring and have played with an impressive list of bands. For them, Warped Tour was a nice stepping-stone and entry into the band’s resume.

“We did sell some merch; that was good,” says Jake. “We didn’t have the full-length out then, but we sold some T-shirts and EPs. We also took some other records with us to sell like The Kill’s Extended Play, and Hammergun’s Texas,” says Jake.

“Yeah, my advice to any local or independent band on Warped Tour is; set your merch table up next to the biggest band you can find. Because there is no order or reserved spot for merch tables, it’s just this huge area and you set up wherever,” Josh added.

Jake also interjects, “Yeah, and sleep as much as you can.”

TNTD are only playing the Salt Lake show this year. So, if you’re going, show them the love and go see them when they play our local venues as well.

2004’s Warped Tour only saw one SLC band on it. TNTD told me that Day Two played the entire Warped Tour last year. Had I known that previous to this article, I would have attempted to contact them as well, but I was unaware. Needless to say, it must have benefited them in some way to play the entire U.S. with that many bands and fans.

This year, the tour features acts such as Transplants, My Chemical Romance, The Offspring, Atreyu and The Explosion. The Warped Tour has gotten much more diverse with bands in the emo scene (Underoath), street punk (The Unseen) and metalcore (Avenged Sevelfold). The variety takes some of the brunt end of commercial abuse that many of the underground punks hated from previous tours. It has now turned into a traveling showcase of bands that you may see on TRL every day alongside bands that MTV would never let step foot on a TV screen.

Another Salt Lake band who will be on this year’s tour is our own Her Candane, who was invited to play the Ernie Ball stage. Her Candane plays a breed of heavy complex rock that a lot of the emo kids will run from, but their live performances are something no one can deny. Unfortunately, scheduling difficulties prohibited us from being able to sit down and chat. From what I gathered, they will be playing the Salt Lake leg of the tour, but beyond that, I’m unsure of how many dates they’ll be playing. Her Candane has a new record coming out in August on United Edge Records. If you haven’t seen them live yet, then get off your ass and go. Other Utah bands playing the Ernie Ball stage were winners of the Ernie Ball Battle of the Bands contest: In Camera, His Red Letters, Take the Fall, Side Dish, Kane Hodder, My American Heart, Big D and the Kid’s Table, Bleed the Dream, Monty’s Fan Club and Opiate for the Masses.

The third band on this year’s bill is Ogden’s Skint. Skint is an old-school, politically charged street-punk band who have been together for about eight years. They are the only unsigned band to get 12 shows on the Warped Tour. They have a very solid fan base in Ogden and Salt Lake, hopefully for them, this fan base will extend itself beyond this high plains desert into some other cities when they rock them on the Warped Tour. I spoke with Jason from Skint, and he seemed very excited about the opportunity.

“Well, we put in an application on the official Warped Tour website,” says Jason. “When they selected us, we only got Salt Lake City, but we were on tour three months ago with the Warped Tour barbeque band Left Alone, and they sponsor a stage and we were selected to play on that stage. So, that’s how we got so many shows,” Jason explained.

For an “old school,” heavier punk band, I wondered if there were really any bands on this year’s bill they felt they would identify with.

In eight years, Skint has done quite a few small tours out to the West Coast, Colorado and Arizona. They actually try to go out and tour every other month. They understand the importance of networking in the scene in order to advance as a band.

“We’re gonna be selling CDs, giving out samplers,” says Jason. “Just basically working 14-hour days in order to get our music out there and make some connections.”

I then decided to test the waters and mention the fact that bands like them and The Unseen would have to be sharing stages with some of the bands who created the “mall punk” genre. I asked how he felt about playing before masses of sheltered kids who, as of now, think those bands are the epitome of punk rock and have never been exposed to a band like theirs.

“I think everybody knows that if it’s good, it’s good,” says Jason. “I think kids will like our music. On the same page, a lot of kids that come to the Warped Tour now aren’t even into punk. There are a lot of emo bands and hardcore bands, so hopefully, we’ll get some of those guys to listen to us as well. We’re just totally blessed and fortunate to be doing these shows along the whole West Coast.”

At the end of September, they’ll be putting out a new record. They’ve put out three EPs, a full-length, Dead End Of Glory, and have played shows with Rise Against, Nashville Pussy, Throwrag, Thursday and Dwayne Peters. Skint seems to be one of the most ambitious and eager bands I’ve ever met in my life, which will hopefully lead to a great deal of success for them.

When we reach the end of this punk rock rainbow, I’m not sure if the Warped Tour will lead to a pot of gold, or another crack in the jaded foundation of the entire culture. It’s been very easy for me to bad-mouth the Warped Tour in the past, but that’s because I’m old. I was at the age that most of the tourgoers are now when you only saw a punk or hardcore band in a rundown venue that smelled like shit, usually on 300 West. There were no punk bands, or bands that called themselves punk on television or the radio, and you sure as fuck didn’t have a chain store in every mall across America selling their mass-produced merchandise. Like all things, punk rock may be getting re-packaged and re-sold to us, but at least bands on the real level of the culture are getting a chance to make a go of their careers in music through the Warped Tour. I would like to think that most bands cringe every time they look behind them while they’re onstage and see a big corporate banner waving behind them. There will always be music for the masses, and music for people who actually love music. I know that the three local bands playing this year love music and that’s why they’re doing this. They won’t be on commercials and they won’t be sponsoring clothing brands in the future. If anything, they’ll use Warped Tour like an old car. Get everything they can out of it, leave it when it’s done, and move on to doing their own new and exciting things; you know, like getting a new car, or a bike, or just fucking walking.