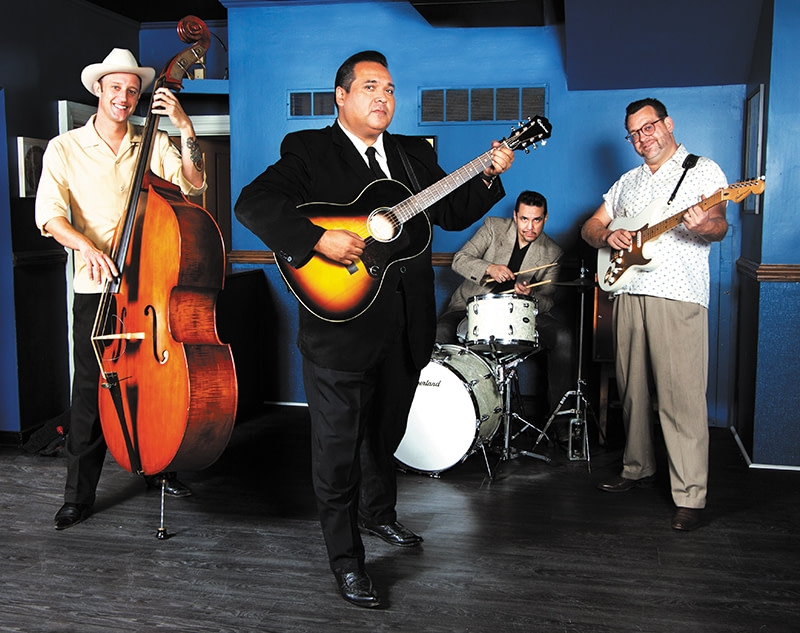 The Legend of Big Sandy and His Fly-Rite Boys

Photo: James Via
If asked to name a rockabilly legend, most might say Elvis Presley or Jerry Lee Lewis, and maybe, if they’ve done their homework, Charlie Feathers or Johnny Burnette. If I called Big Sandy a rockabilly legend, some might be confused by that—mostly because he’s not an original Sun Records guy. But after more than 25 years of playing with the Fly-Rite Boys, he’s more than earned the term legend. Big Sandy and His Fly-Rite Boys are set to perform in Salt Lake City at The Garage on Beck on May 6.

A true legend forever changes the landscape of their field. From the beginning, Big Sandy and his band were looking to do something different. Diverging from the “modern” rockabilly that was going on at the time, Big Sandy and the Fly-Rite Boys were able to recreate a ’50s sound while remaining wholly original.

“I grew up on all kinds of music—doo-wop, R&B, country, rock n’ roll and rockabilly,” says Big Sandy. “I started out playing in my teens and got into some bands in the early ’80s. They were more modeled after bands like Stray Cats, which was close to what I was into but not exactly what I was looking for. As I fell deeper into record collecting, and I started finding the really rare stuff, I knew I wanted to get something closer. What I would say was a huge linchpin was finding TK Smith who had a sound like Cliff Gallup (Gene Vincent), and building around that is what led to the formation of the Fly-Rite trio.”

Acting on passion and enthusiasm, the band was initially more concerned with having fun and just making music that they deemed cool. The thought of a long career in music never crossed their minds. “We were just more of the mindset that we couldn’t improve on what came before, but with energy and feeling, we could make it vital and exciting.”

Even though Big Sandy will always be strongly linked to rockabilly, as time went on, many influences such as Western swing, jazz, and R&B all became ingredients in a new roots music stew that called to mind the country boogie that was the precursor to rockabilly. “Later on, we’d expand the influences, and that would make things more interesting and allow us to be more creative,” he says. “We love all kinds of music, but it took a while for things to loosen up and for us to realize that we could include these other influences and still remain sincere to our own sound.”

After a few years, the band was able to go full-time into music, but keeping their heads down and focusing on the work at hand hasn’t really allowed them full comprehension of their place in rockabilly roots music history. Slowly, they’ve become aware of just how much it means. “I’m just starting to get a sense of the importance our role played and where we stand in the bigger picture,” says Big Sandy. “For a long time, the people at the shows were our buddies and guys from other bands, and now [there are] these younger kids that come out to shows and give us a certain level of respect. They’ve heard the stories—from their parents, some of them—and it’s been nice to see that we can still grab them today, and we’re not these relics that used to be good but can’t quite do it anymore.”

If anything has kept fans buying records and coming to Big Sandy shows, it has to be that the artistry in the songwriting has always delved deeper than the generic rockabilly subject matter of girls and cars. “Listening to country music, I really liked the lyrics,” he says. “They were a lot deeper than most of the rockabilly stuff. It wasn’t a conscious thing—I think it just found its way into our music. Ever since I was young, I would write poetry and just write to express myself, and it was totally separate from the music, but over the years, I started to let more of that into the songs.”

Over the course of Big Sandy’s career, he and the band have achieved so much, from playing on late night TV to recently winning two consecutive Ameripolitan awards. After 25 years, though, it’s still the music fan moments that mean the most.

“Of all the things we’ve done, that means the most to me,” says Big Sandy, “it was being able to perform onstage at the Grand Ole Opry. It was so surreal—I felt like everything was in slow motion, and I kept having flashes of all my country music heroes like George Jones and Hank Williams. The other thing that I still can’t believe happened to me is that I was backed by Scotty Moore, DJ Fontana and James Burton, who all played with Elvis, and I had this moment where I was this music-crazy kid who’s been listening to these guys his whole life.”

Saying someone is a legend immediately opens their influence up for conjecture, but honestly, there’s zero doubt in my mind that he deserves that moniker. He’s one of the few contemporary artists that simultaneously hold on to elements of the past while pushing his own creativity, and anyone who can pull that off is truly a legend. Check out the legend yourself— Big Sandy and His Fly-Rite Boys will be playing at The Garage on Beck on May 6.