I take it as a positive portent that the day I received the new Erasure album promo to review, I was on an obsessive cycle of listening to its first single, the anthemic “Elevation.”

“The Love Gets Higher …” Erasure’s “The Violet Flame” Reviewed 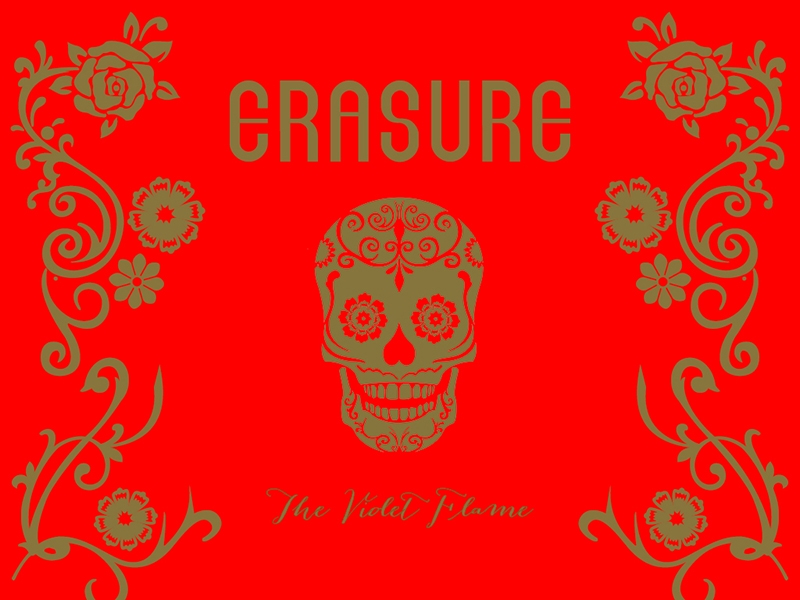 How lucky we are to have another Erasure album so soon, since it hasn’t even been a full year since Vince Clarke and Andy Bell delivered their destined-to-be-classic Snow Globe project late last year.

I take it as a positive portent that the day I received the new Erasure album promo to review, I was on an obsessive cycle of listening to its first single, the anthemic “Elevation,” alongside one of its companion album tracks remixed, the adumbrative “Paradise,” from the band’s Soundcloud page. Being a fan, I had purchased “Elevation” dutifully the day it was released, but due to many outside intrusions and obligations, hadn’t yet given it the proper listen it deserved. While unavoidable, it turns out that this was my mistake. “Elevation” is a phenomenal single—uplifting, hopefully spirited and gloriously memorable. In reflection now in context to its place on the new album—the felicitously titled The Violet Flame—it is easy to see why this was chosen as the lead single. That must have been a tough choice in itself, since I count no less than six contenders as potential “hits” here, which is pretty astounding considering there are only 10 tracks on this, the band’s sixteenth full-length album.

How lucky we are to have another album so soon, since it hasn’t even been a full year since Vince Clarke and Andy Bell delivered their destined-to-be-classic Snow Globe project late last year. I suspect that some of these new songs were possibly demoed then—based on their lyrics and subject matter, which I’ll go into a bit briefly when I break-down each track later—but the end result is that this is a uniquely different collection of new songs than Snow Globe’s original five compositions were. These songs offer a darker shading to the duo’s mostly happier synth-pop canon—especially lyrically—showcasing a delicate penitence and realism that is matched by Bell’s staggering vocal contributions and Clarke’s unmistakably deft soundscapes constructed around them. It is here that I must point out that, as a music fan, it is always a good sign when you crave to hear something that you’ve been separated from and such is the case in these ten tracks—melodies, bridges and choruses burn long after the final track ends, for The Violet Flame is first and foremost a multilayered album.

Before discussing these new tracks, I would like to briefly defend the benefits of economy. The duo have rarely presented full albums that contain more than 10 to 11 tracks, and most of those tracks have averaged a just-under-the-four-minute-mark—the exception being 1995’s glorious eponymous release that was purposely elongated (under the skilled hands of The Orb’s Thomas Fehlmann as co-producer, no less). That much-loved release aside, it is a formula that has served the band well, apparent on and vital to the violet flame. The songs’ great lure and power sink in deeper upon repeated listens and even their titles seem purposely abbreviated. Take the opener, “Dead Of Night,” where we seem to jump right into the beat that has already started chugging. No long build-ups here—we go right into the shadowy lyrics with Bell’s trepidatious vocals starting a mere 20 seconds into that beat: “How do you see yourself in the darkness?” he asks. It is on this track that more vocal experimentation is obvious and sets a precedence for what is to come. Working again with Snow Globe’s co-producer Richard X (Saint Etienne, Pet Shop Boys, Goldfrapp) Bell sounds remarkably uninhibited in his vocals, and whether this is strictly from X’s collaboration to their sound or his own experimentation remains to be seen, but it does wonders.

A friend recently lamented that he didn’t hear Clarke on “Elevation” and worried that he wouldn’t like the album as a result. Fortunately, I had to disagree and explain that to me one of X’s greatest assets is that he to respects and understands the musicians he is working with and subtly—in the truest sense of the term—helps update their sound. Clarke’s unmistakable synths are all over The Violet Flame. Besides, I’ll argue, didn’t Clarke co-write “Elevation?” I think my friend’s reluctance stems from “Elevation”’s EDM-influences. The ascending 30 second or so synth opening is classic Clarke to my ears and remains at the song’s core. And those lyrics: “It makes you kinda wonder/what are we supposed to do/when the fate of many/is guided by the hands of few” that Bell so effortlessly offers us and later the heavenly overdubs of his “The love gets higher” cement the importance of this single to the band’s catalogue.

My friend’s anxiety will be instantly diminished by “Reason,” the first of the two most classic Erasure-sounding cuts. Its chorus is pure pop, but, in true Erasure fashion, its bridge is absolutely sublime. I also love the way Bell sings “The tears in my heart”— beautifully accentuating “Heart” before the choruses. “Reason” is an instant contender for a single. Speaking of which, if there were no “Elevation” (perish the thought!) I would have picked the next track, “Promises” hands down and I think this is the strongest candidate for a single release. “Promises,” has it all—it’s instantly upbeat with Clarke’s punchy synth jabs accentuating Bell, here in fine voice and playfully dramatic with his lyrics. The chorus is irresistible and buoyed further by a great background vocal performance and this has become my most revisited album track.

By contrast, “Be The One,” the first of two ballads, was initially a bit of a let down after four upbeat—albeit darker—tracks, but its beauty is just too apparent to ignore. In hindsight, it is actually placed fairly perfectly to balance what came before it and what comes after it. The duo remain skilled at mid-tempo balladry and repeat visits showcase its subtle gorgeousness—especially a gentle lullaby-like musical coloring by Clarke and another fine vocal from Bell. Contrary to its title, “Sacred” eventually turns itself into bit of a light stomper if not a show stopper—rousing and inspired with some great contributions from both members. Bell’s vocal is delicate and celestial while Clarke runs quite freely and wildly around him. This cut could easily fit onto Snow Globe and could potentially be released as a holiday single.

Another potential single is the poppy “Under The Wave,” which is also the other most classic Erasure-sounding track and, by its catchy chorus, Bell’s percolating “whoa oh oh ohs” have ingrained themselves nicely just as its beat has wrapped itself around your brain. This track has great potential and numerous listens reveal there many musical levels within its core structure—Clarke’s random harpsichord-like stabs during the second verse are an especially interesting touch.

“Smoke and Mirrors,” the album’s other ballad, comes next and is the clearly the polar twin to Snow Globe’s “Loving Man.” If Bell’s happier stance on that track was purposely defiant to his personal grief over the death of his former partner, Paul Hickey—which was apparent from his addressing someone in the mirror in the former song’s more hopeful lyrics—then “Smoke and Mirrors” appears to have been borne from a deeper and more profound side of that grief. This dark and confessional cautionary tale may seem odd for a pop album, yet it is exactly due to their willingness to experiment with their darker side that make Erasure endure. Witness Bell’s repentant and reverential vocals, while his mature and personal lyrics are theatrical, operatic and hauntingly effective: “But sorry won’t be heard or make amends/I’d give my all to hold you once again,” he laments as his penance. Clarke’s contribution here is no less arresting: lower registered synths swirl with a rise and fall and a sole, sad whistle chillingly seems to be backing Bell.

Acting as a reprieve from the emotional punch of its elegiac predecessor, the varied and stunning “Paradise” arrives. If any of the album’s 10 cuts reflect the title or even the cover artwork, surely this tocsin fits that bill best. Catchy and upbeat though it is, the prescient lyrics and delivery are decidedly rebellious: “If you let your demons go/Let ‘em walk right out of mind/It will purify your soul/And out of the flames you will rise” Bell intones, conspiring alongside Clarke’s ripping synths and whirling dervish-like touches. Ending on this single-worthy high would have been sufficient, but having “Stayed A Little Late Tonight” there is even better. I love the suaveness of Bell’s slightly higher-octave vocals here and his lyrics reference a modernity by using such references as “OCD” and “OTT,” while Clarke’s beat is quite polished itself, recalling tinges of ‘70s disco and bringing the proceedings a nice, uplifting closure.

On The Violet Flame, Messieurs Clarke and Bell sound is unencumbered by synth pop’s perceived boundaries, presenting a full encapsulation of their own vision/sound/execution. It is so easy—not to mention lazy—to label and categorize artists by the era from which they originated, but 29 years into their career, Erasure have delivered yet another remarkably memorable album. I’ve mentioned his unique and inspired vocals before and especially throughout this review, but Bell’s voice really has only improved over the years. Like Snow Globe before it, he sounds celestially inspired—particularly so on the poppier tracks—and it is though he’s reached a new level. Both of these talents know how to make a well-rounded album and kudos to Richard X, too, for his invaluable contributions to the project’s success.

The Violet Flame is presently available to pre-order in three physical formats: a single disc, a limited double disc featuring their 2011 Short Circuit Festival performance, and both of these formats will be available digitally from all normal outlets from Tuesday, September 23rd in the US. The third physical format (highly limited and only available through the band’s Pledge Music page) features the crème de la crème: a third bonus The Violet Flame Remixed disc featuring unique mixes and takes of each the album’s 10 tracks, exclusive to this box and not available anywhere else. But hurry on that one as it is sure to go out of print any day now. If all this weren’t exciting enough, the boys will be back in town to promote the album at the Capitol Theatre on Oct. 29.